Hey wow! I'm back! Thanks to everyone who read my Twitter. Was real hard finding free wifi in Tokyo. Ended up using my phone's 3G to Twitter. Hah, guess next month's phone bill's gonna be a killer.
Gee, where do I start? Did I enjoy myself? Sure did despite the freezing weather, I believe the lowest was 2C. You know why Japan's cool? Any country where its perfectly normal to wear face masks on the streets is cool in my book. Was like one-fifth of the people were wearing face masks, yah, I know it's cos of the cold etc.. And oh yah, I bought porn magazines too, FOOD porn magazines! I mean, Japanese food mags with lots of really mouth-watering pix of desserts and other great food stuff, with directions on where to find them in Japan.
So many things to remember, say, write and of course pictures to post. So let's start with a little bit of tradition. Like all my other Japan trips, here're more new Japanese Haagen-Dazs flavours!
Yup, no Japan trip of Cavalock's is complete without seeing what this year's new flavours are. Here we have Blueberry Cheesecake, Gateau au Chocolat and Millefeuille. Bought all three, decided am not a big fan of the flaky stuff on top of the Millefeuille. 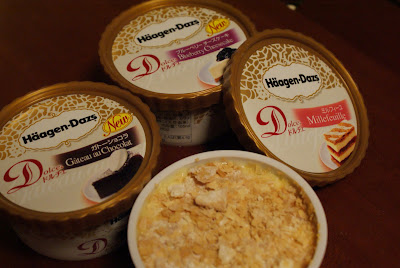 My favourite was the Blueberry Cheesecake. Rich cheescake flavour with nice blueberry topping. 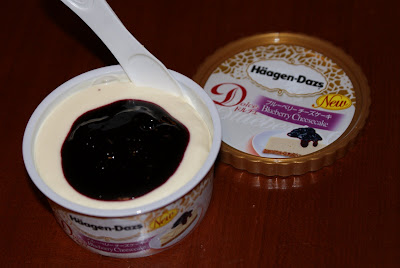 The Gateau was way too choclatey for me. Only if you really into rich dark choc. They have other new flavours too. Like English Tea, Tiraminsu (new cos I think there's some fancy cocoa topping, unlike our tubs here) and some new mocha flavour that I forgot. 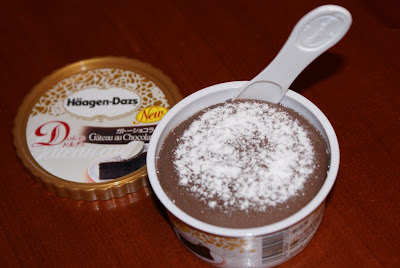 I am so jealous! Hmm... why doesn't the blueberry topping on top of the ice cream freeze? Or does the topping comes separate in a sachet?

Good to know you're back safely. :)

damn. i'd love to try the gateau. why don't we have these exciting flavors here.

ice: nope, the topping's already in the little tub. no sachets!

imp: no lah, photos were taken in hotel room. brought back lots of other stuff though! ;P