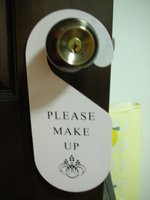 Awww man, what a sucky day at work and it's just gonna get worse in the coming weeks. Anyway, here's a little hotel souvenir from Kyoto that I just couldn't resist. Hang it outside your bedroom, office door, etc and let the fun begin! 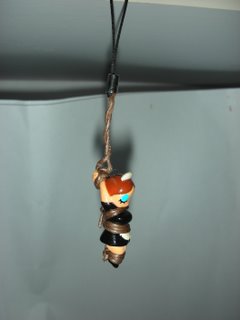 Speaking of maids, check out me new handphone accessory, also from Japan. Bet you won't find this being sold openly here. They got another tied up in a tight little cheongsum too!

Its like Friday morning now as I post this when I actually started writing this on …er….Tuesday? Had a little problem uploading the pix. Like I said, work is pretty crazy right now. Thank goodness for You Tube and Mystery Science Theatre! Best comedy ever! Any fans out there?

Coming up next! The latest on the Wash Pole Flag! It's Week 2 and is it still up there?
Posted by Cavalock at 11:18 pm 2 comments:

Patriotism On A Wash Pole 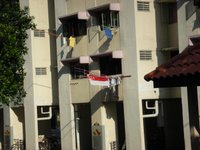 Holy crap! Its been like four or five days already and it's still out there! At first I figured it was hung out to dry but I'm beginning to think that it's really meant as a flag pole! Well, nothing says 'I'm a Singaporean' better than having the flag hanging on a wash pole right out of a HDB heartland window. Here's another close-up, suitable for all you patriots out there looking for a wallpaper or screensaver. Don't thank me, just doing my bit for the country. 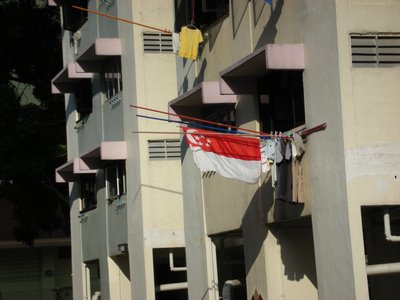 Something I saw on me way to work the other day. Yup, someone took the national flag out for spin and rinse and hung it out to dry on a pole (probably right next to the undies). That's something you don't see everyday. Now, I could make some social commentary about how this country needs a cleaning up in more ways than one, but I shan't. 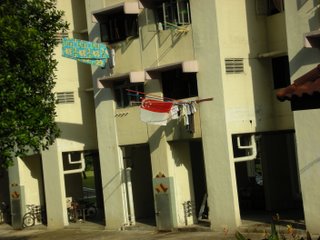 So What's Your Favorite Holiday Movie?

So there I was, flying to Tokyo and scanning all those free in-flight movies, lots of latest ones that I have yet to catch including King Kong and The Pink Panther. I flipped through the movie pages until I saw one of my favourite Xmas movies! It’s a popular movie set during the holiday season in Los Angeles and opens with a crisp Jingle Bell Rock soundtrack. I have watched this movie about a dozen times on TV and it never fails to bring a warm glow to my heart and smirk on my face.

I am of course referring to the hit movie Lethal Weapon starring a young Mel Gibson and Danny Glover. The other favourite Xmas movie of mine is naturally Die Hard. Who can forget that classic line “Ho Ho Ho! Now I have a machine gun!” written on a dead bad guy’s chest. Yes, not many people remember it but those two blockbuster action movies are actually Xmas movies!

Well, I watched it again and what can I say? I still loved almost every minute of it! Hey, those two movies pretty much kicked off a couple of whole new action genres. The familiar buddy cop action genre and the lone-desperate-man-vs-army-of-elite-baddies genre!

I was very tempted to watch it yet again on my return flight but I resisted and picked up Kong instead. And speaking of return flights, there are just SOME of the snacks I brought back with me. Look and drool folks! 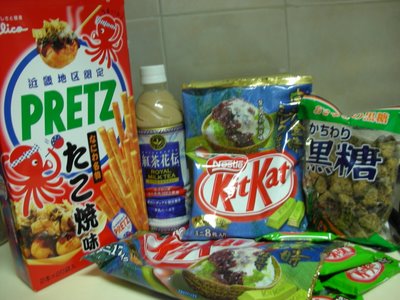 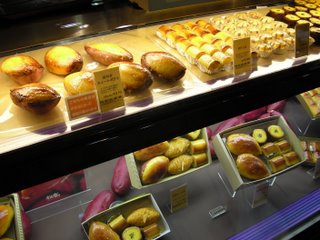 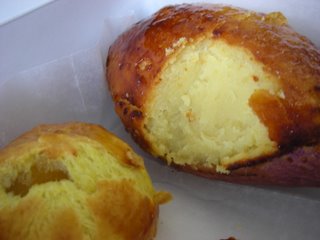 Sweets For My Sweet

After more than 14 hours at work, I just don't feel like talking/writing/typing much so I figured I'll just post some of my favorite food pix from my last trip to Japan. Damn, I sure as Hell need some major comfort food right now. 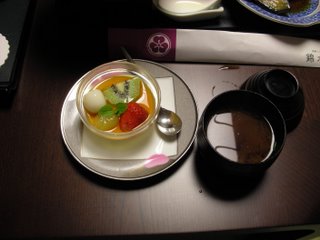 Dessert after my full-set dinner at the Ryoken. Anyone interested in seeing the full-set meal? 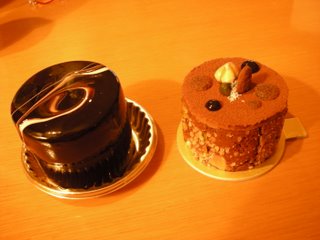 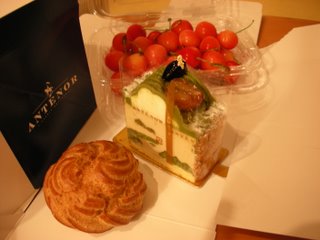 Just some of yummy pastries I bought back to my hotel room from those department stores' food basements. Yah, those are cherries! Although not as sweet as these cherries. 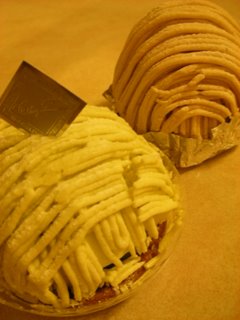 Chestnut and Green Tea Japanese Mont Blac cakes that are simply to die for! 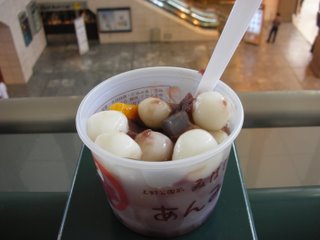 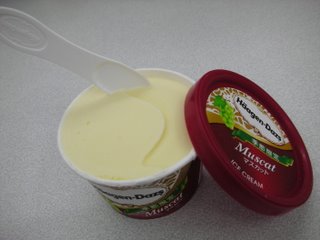 And when you are on the move during lunch, there's always D-I-Y dessert. Damn, I wish Haagen-Dass brought in flavours like that to Singapore. There's actually little crewy bits in the ice-cream.

Well, I hope this entry wasn't too frightfully boring for those of you without a sweet tooth.

Remember how I wanted to make this a food blog when I first started…then I kinda got sidetracked and had other stuff to say, soon it got less and less about food. Well, I do have quite a lot of social commentary stuff to say like the recent mrbrown incident, media censorship etc. I mean I know the guy personally (he’s a nice family guy) and I have seen the inner workings of our local media organizations (hell, I was even on their payroll)…but…*sigh*…it’s exactly because I have seen how ‘things’ are done or ‘taken care of’ (they’ll teach you a thing or two about using every dirty trick in the book to shut you down), that I feel like, what’s the use of complaining? We are nothing more than an alleged first world country with third world internal wirings.

So I figured I’ll just yak about more personal stuff and hopefully a little more on food. I’m not out to win any popularity contest otherwise you’ll see me talking about sex half the time! Bwah-ha-ha-ha!

Anyway, back to more food talk. Looking at me ticket stubs, realized I took seven Shinkansen (bullet train) rides while in Japan recently and here are some pix of my onboard lunch which I bought before boarding. Also bought the seven-day railway pass (in Singapore) so it was unlimited number of rides across the JR lines for me. 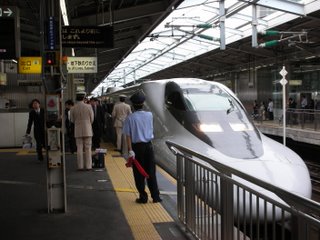 I got most of my meals from those terrific department store basement supermarkets. They have the widest and most mouth-watering selection of food ever! It’s summer too and that means lots of cool, icy desserts at almost every corner! Man, I could spend hours just walking around and around each supermarket/food basement. 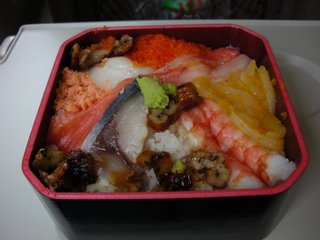 The last pix below is crab meat with rice and the drink's one of my favorite. Royal Milk Tea by Kochakaden. I wish they have here in Singapore. 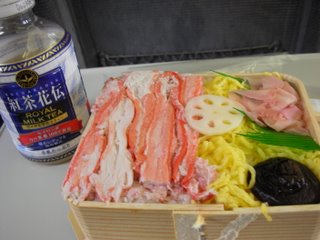 I love this song. Back when I was starting out and doing my own thing. Watching the Wheels by the late, great John Lennon was like my theme song of my early life. The lyrics fitted me exactly and I could totally relate to it.

Watching The Wheels
by John Lennon

Why Japan Is Cool 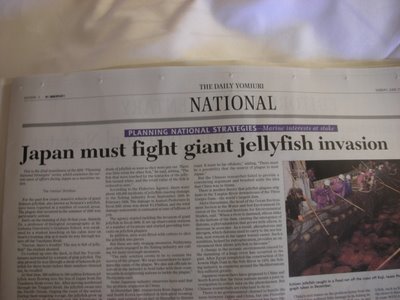 Here's an actual newspaper headline that appeared while I was in Japan last week. And you thought these things only happened in old sci-fi movies!
Posted by Cavalock at 12:30 am 4 comments: