Cavalock and The Pan Searing Experiment

Home alone on a Friday night and finally decided to put something together a la Chopped and Iron Chef, for dinner. Took a look in the fridge or rather rampaged through the ice box, and found myself a bag of scallops, a chunk of salmon and a head of broccoli. 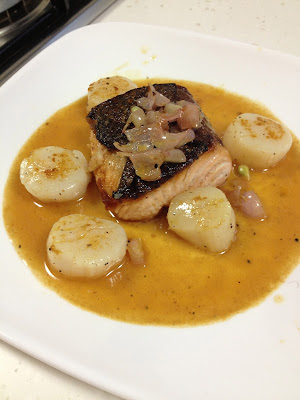 So after a quick scan of various YouTube videos on how to pan sear salmon and scallops, I'm ready to go! But seriously, all I did was do a Google video search for "pan seared salmon" and "pan seared scallops" to get started. There are lotsa short videos to choose from. I merely picked those with celebrity chefs whom I'm familiar with. 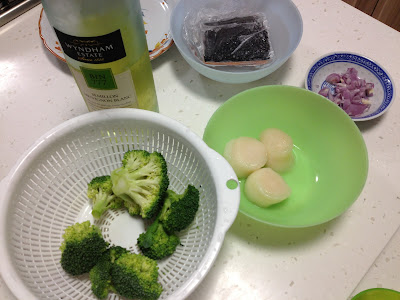 Everything turned out alright, wasn't the best thing that came outta the kitchen but I figured it was ok for a last minute thing. The scallops needed more salt although I thought they were nicely seared. And I rather like the salmon, having seasoned it with olive oil, some salt and pepper before searing it o a medium rare. Rather enjoyed the crisp skin too. Now having done the salmon and scallops, I immediately added the white wine and shallots to make the sauce. Could have used more white wine and some fresh herbs (was outta fresh herbs) to create a more flavorful sauce I think. Also did a very simple boiled broccoli soup to complete the meal. 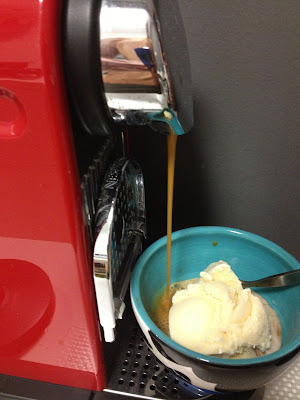 Of course, the fastest dessert I can prepare. My usual affogato and definitely no complaints there. But cleaning up after the meal was %^#!?*&$@! We got oil splatter all over the kitchen which meant almost half hour of cleaning up to do. Now you sure as hell won't find other 'food' blogs giving you the lowdown, underbelly side of food blogging like I do! <^;^> 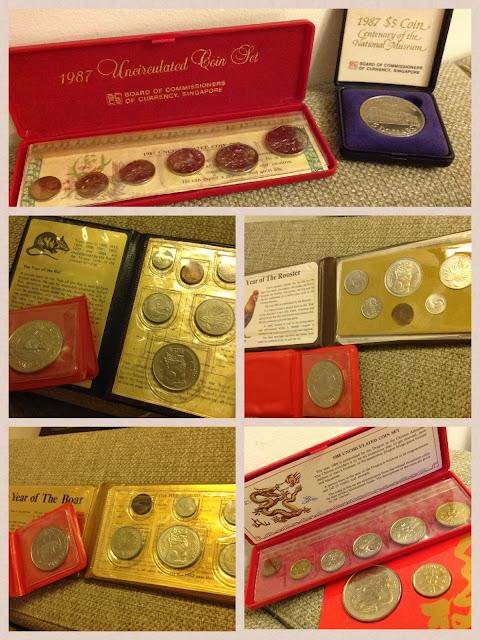 To 'celebrate' the announcement of the new coins heading our way later this year, I thought I'll try to sell some of my old coins from the family home. I usually put these up for sale on my Facebook but I figured I'll showcase some of them here. Each is a commemorative coin set celebrating a Chinese zodiac year. Perfect for today's coin collectors or for someone who's born in that year.

Then in clockwise direction, we got a Year of the Rooster (1981) set and a $10 Rooster coin. Now the coins in the set are those for the series prior to the current one in circulation, the old marine life series. Yours for only S$20.

Drop me an email at cavalock@yahoo.com if there's anything you like and thanks for dropping by!

Cavalock and The Delice Derivation

From my tiny little apartment kitchen but not by my hands, here's a very tempting Green Tea and Jasmine Delice. The recipe's from Dailydelicious.com, right here. Now the recipe might look a bit tedious and complicated but I was told that it's not at all. 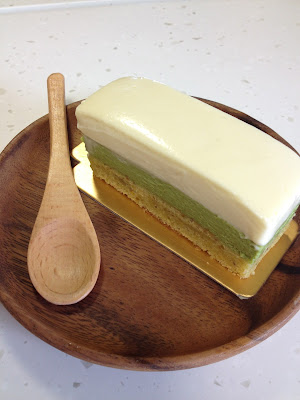 The steps provided are extremely detailed and comprehensive. I was also informed that there's very little technique involved so it's entirely possible for almost anyone to whip this up. It may be time-consuming but the reward as you can see, is definitely worth every bite.  Looks and tastes great, just like one them fancy Japanese desserts that go for around S$8 in a mall. So I guess all I'm saying is that anything's possible with the right attitude and a lot of patience. ;) 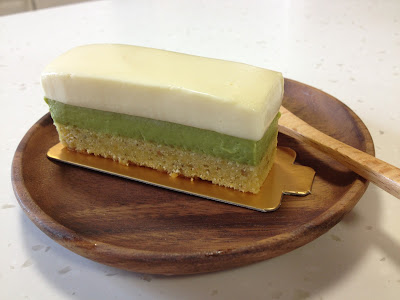 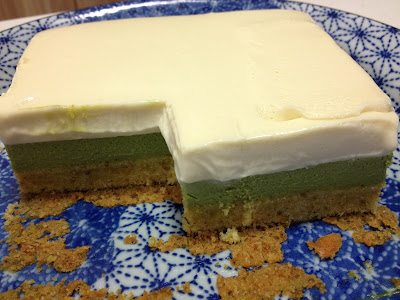 Its been way too long time since I read a non-fiction book, figured its bout time I did when I saw this at the public library earlier this week. Always been a huge fan of ancient history, so it's a no-brainer that I immediately grabbed it when I saw at the 'Latest Arrival' display shelf. Still into the first chapter and quite an interesting read so far. 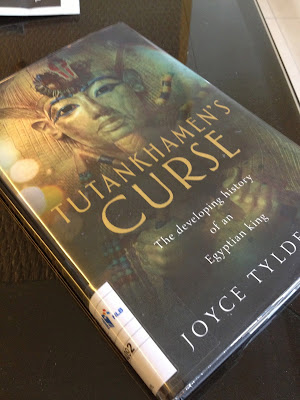 Happy Lunar New Year everybody! Here's a little early new year dinner I had couple weeks ago. Was my first time having the traditional 'pen cai'. As you can see, it's a big pot of steaming goodness like baby abalones, prawns, duck, mushrooms, fish cakes and pretty much all the other stuff you would expect to find in a big Chinese dinner. That there takeaway pot costs S$298 from Imperial Treasure and I just saw on TV yesterday, a bigger pot like that cost less than half the price in Malaysia! 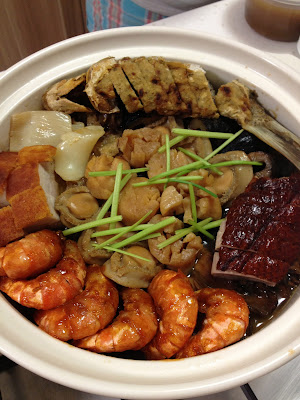 Gosh, looking back over the years or even decades, Lunar New Year celebrations have definitely changed quite a bit for yours truly. And then again, maybe not that much.

Whenever I hear of big family reunions during the Lunar New Year, I always think of how 'fortunate' I am that I don't have to go through all that drama or charade of being nice to strangers that you meet only once a year. I come from a very small and closely knit family, so when I do any new year visiting it's to folks that I see almost every other day. No awkwardness, no dumb questions, no need for new wardrobe, just another regular family visit.

But as one grows older, Lunar New Year celebrations loses some of its appeal, its magic, that sense of wonder. I miss my mom and all my aunt and uncles who aren't with me anymore. Even big new year office lunches, haven't had one of those since I became a caregiver. Hmmm... maybe I don't miss the office lunches as much as I miss the office new year bonu$ that usually come with it. Hah!

Posted by Cavalock at 2:13 pm No comments:

Cavalock and The Wednesday's Beer Cat

You like cats? You like drinking beer? Then I guess you might like this. I have no idea how it tastes like but it's not everyday you see a Japanese beer named after a day of the week then calls itself a cat, done Belgian style and includes orange peel as well as coriander aroma. Where else but at Meidi-Ya, Liang Court. <^;^> 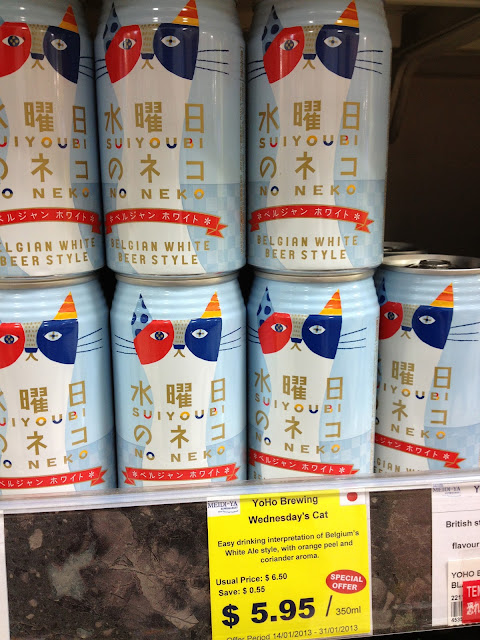 Here's a popular kopi tiam that's been featured numerous times in the papers, TV and blogs.  The famous Beach Road Scissor-cut Curry Rice shop along Jalan Besar. Believe it or not, I only started eating here last year even though I live not that far away. Truth is, the word 'curry' kinda scared me off but finally gave it a try and I luv it. :P 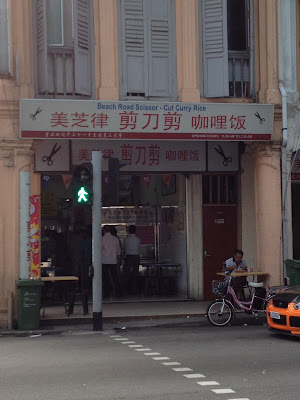 Yah, it does look real messy but how it looks is inversely proportional to its taste. Really! The curry ain't spicy at all. It's more like gravy. My usual suspects, rice, chicken wing, cabbage and a fried egg. 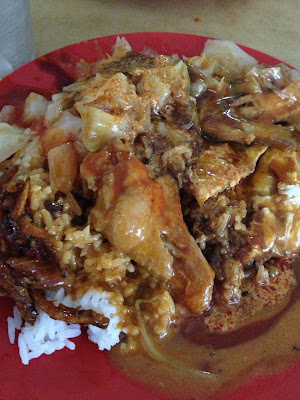 Well, looks like my Dad has found some other kinda birds to shoot besides all them eagles around the island. Despite what some urbanities might think, there's actually a rather rich wildlife scene here. My 79-year-old Dad is out almost everyday lugging his heavy load of photography gear, heading out to places like the Botanic Gardens, Pasir Panjang or Little Guilin. Just thought I'll share some of his latest ones here. 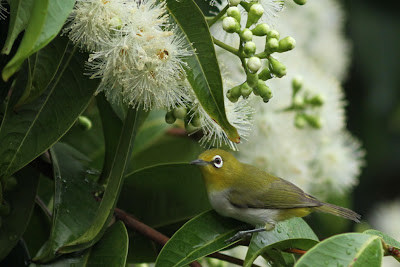 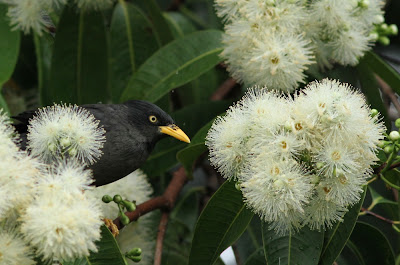 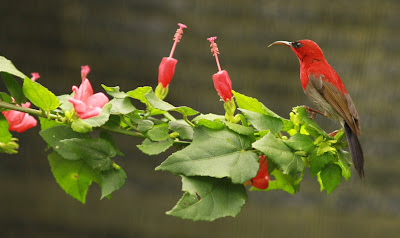 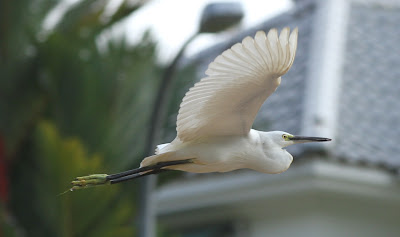 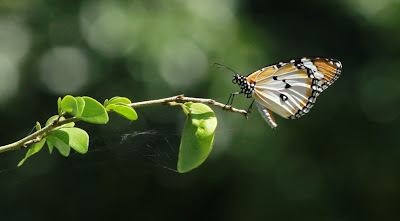 Being a caregiver can be pretty damn stressful as well as depressing, but there are a couple ways for me to de-stress. They don't always work cos my mind is constantly on my family but the alternative is going nuts in front of everyone, and that's not gonna help anyone. 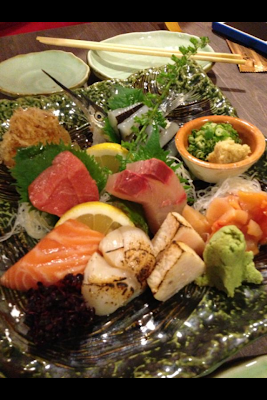 Eating works for me! Got a message that chef Garry that his new place Hakumai at International Plaza is up and ready for hungry masses. I kinda enjoyed his unique take on Japanese cuisine when he was at Hinoki so it's really a no-brainer that I'll be checking his new joint out. 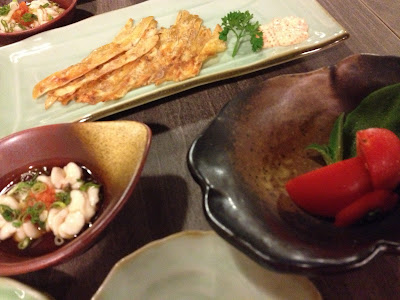 Told Gary to lay off the truffle oil on the sushi and off we go! Had the omakase (again) and we started off with the above left fish sperm, followed by that gorgeous bouquet of fresh sashimi up there. Then came the nicely grilled and meaty trout (that is I think he said it was trout ;P). 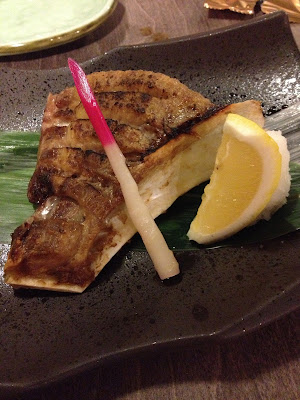 I really liked the clams cooked in sake that came next. I dare say, not unlike something I did before. The selection of sushi was what (IMHO) set Chef Gary apart from your traditional Japanese joints. In addition to raw fish, we got other 'sushi' like one that's topped with a thinly sliced of beef and another  with foie gras. 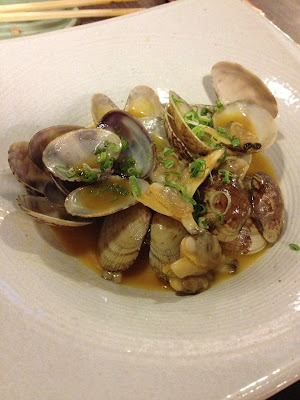 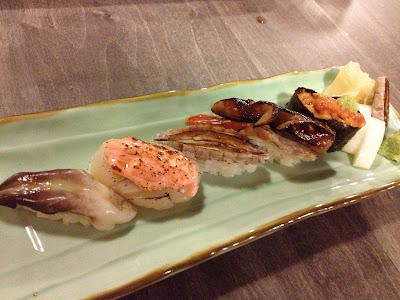 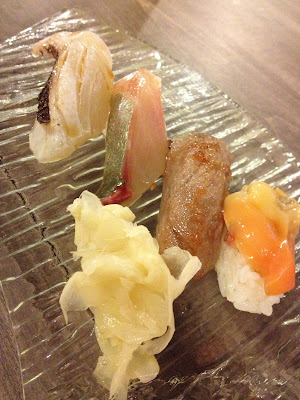 Ended dinner with a cool green tea ice cream and yuzu jello dessert. Now here we got ourselves a little dessert dilemma, which do you eat first? Eat the ice cream first and the overwhelming green tea flavor will completely mask the zesty yuzu jello. Eat that first and your ice cream would have almost melted away by the time you get to it. Other food bloggers may give you (press release) reviews, but I give you puzzles!!!

Jerry: "I can't decide should I eat the jello first or the ice cream?"

Kramer: "It's a riddle wrapped in a CONUNDRUM, Jerry!" 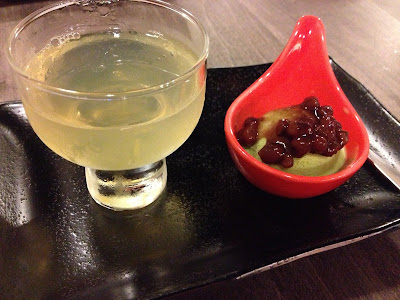 Here's something else I do to de-stress. It's a little more unusual than eating, to say the least. If you read some of my previous posts, you would know that I love gaming, from boardgames to card games to video games. I'm also a big Call of Cthulhu fan. Put them together and you got what you see below. Here's how I scored them if anyone's interested. 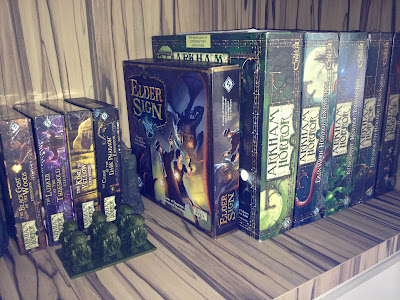 The cool thing about the Arkham Horror boardgame is that if your friends are busy, you can choose to play solo with it. You play a team of investigators from the 1920s trying to stop a monstrous Elder One from driving the world insane. But when you are playing the solo version, you are also playing all the roles, good guys and monsters included. It's like playing a computer game except that you are the computer too. 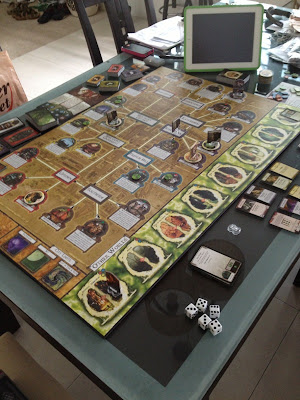 How it helps me de-stress is I gotta really concentrate on the game as I'm usually taking the roles of at least four investigators, each with his or her own set of stats or numbers, as well as all the different creatures they encounter. And there's also a lot of number crunching and dice rolling. Now becos of all these details that I need to keep track of, I get to switch off to almost everything else for up to two to three hours. My mind shuts out the outside world during the game and that sort of helps me de-stress. 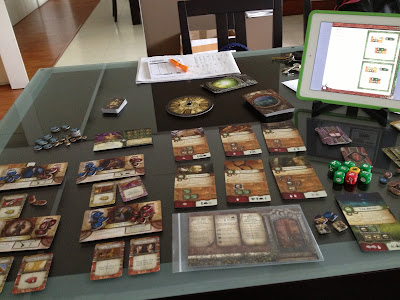 The above is another Call of Cthulhu boardgame Elder Sign,  a lite version of the immense Arkham Horror boardgame. Same premise and it can be played solo too, and needs only about an hour and a half a game. Great game and much easier than Arkham Horror. Guess what! While writing this post, just found out that there's an Elder Sign expansion, Unseen Forces, coming out this year!