So there I was, drafted for babysitting duties to a six-year-old boy with tickets for this year's fireworks display. Figured it was time to try out my big ass camera again and the shots came pretty good. Got some shots later on but the highlight of the day was this little cool discovery of the week at Suntec.

Special 30th Anniversary Space Invaders magnet gashapon! Best. Gashapon. Ever. Why?
1. They are only S$1 each. The official price is 100 yen, that's like S$1.30. So they are like the cheapest gashapon around.
2. Unlike other gashapon, you don't mind getting lots of extras cos you can start building your freakin' Space Invader army. Just spend like S$20 bucks and your army is complete!
3. It's super retro cool! Imagine transforming your fridge door into a video game screen. How cool is that? 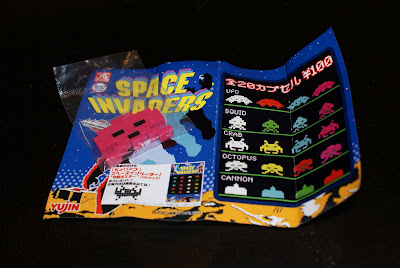 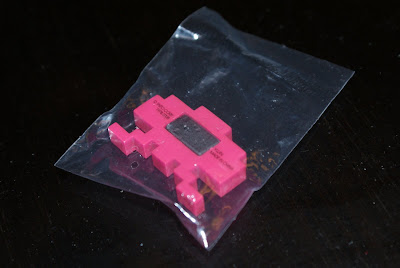 Here are some fireworks shots, here I said, a little better than my last fireworks shot. Heh. Downloaded over 40 pix into my iTouch this morning... 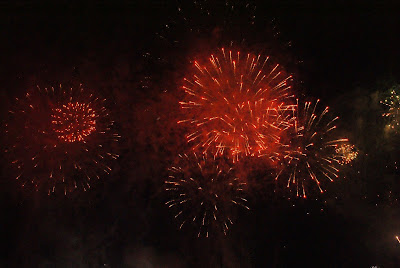 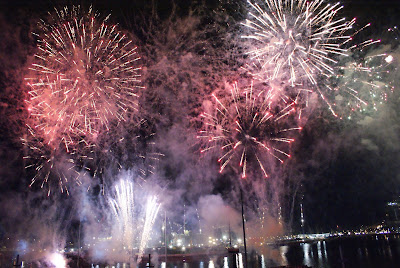 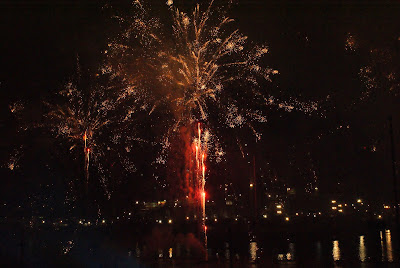 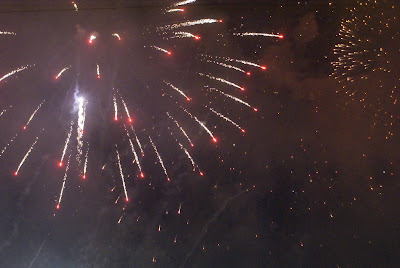 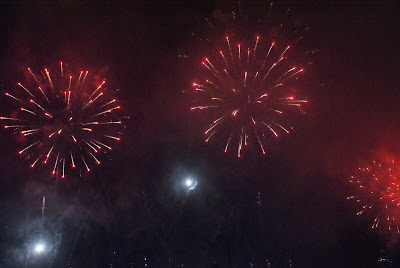 Ended the nite with a Forsty Bailey's at TCC. Not the best Bailey's drink around. 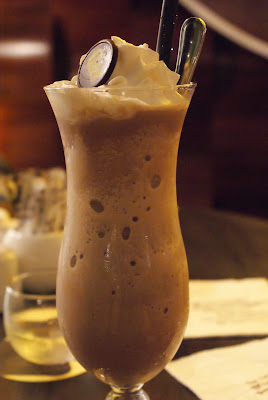 Been downloading a whole bunch of free apps from the official Apple Apps Store. I know everyone has cracked their iPhone/iTouch to download tons of free crap but I’m just too lazy to go do that and am quite happy with the official free stuff I’m getting. Also, my two DS and PSP are also not ‘cracked’. I ain’t no crack whore. Hah. Am ok playing with original stuff, keeps me from going crazy with too many games. Really, back when I had the original first Playstation bout 50 million years ago, I had tons of copy games some I played for only less than an hour. Cos the shops would bring new stuff every week for only S$5 a pop.

Anyway, gripes I have bout the iTouch is how fast the battery goes and how to import some documents from my PC to my Mac to my iTouch. Not sure how accurate the weather apps are but I do enjoy reading the NY Times for free again after all these years. The daily Sukudo keeps me up at nite.

Cool discovery of the week, Key Coffee's Royal Milk Tea Powder. Yes, in my never-ending quest for Royal Milk Tea outside of Japan, I found this little nugget at Isetan last weekend. I recommend heating a cup of fresh milk and then adding bout 2 teaspoons of it. 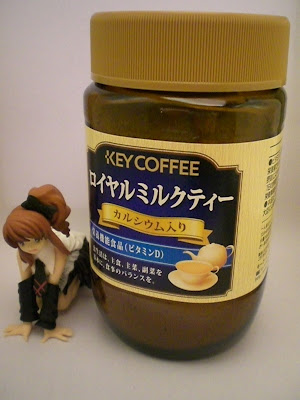 Getting it was a mini-Odyssey in itself. Thought it would be a simple exchange near my office but it became a whole afternoon affair. Was the Thursday that I had to go Suntec to sign up for my Warcraft card game. Fortunately I took a half-day leave, and this is my craaaazzzzy route for the afternoon, now remember its all walking and train rides.

After signing up, walked back to City Hall for train ride to Boon Lay collect my iTouch.

But silly me, took the train to Bt. Batok (they both start with ‘B’ and I’m not familiar with the west!).

Took another train to Boon Lay after my seller wondered where I was.

After transaction, took train back from Boon Lay to City Hall again.

Was almost 6pm when I met my friends at Suntec again for dinner and some card-gaming, as well as get a protective screen for the iTouch.

Whew! And I was carrying a freakin’ heavy bag filled with books and cards too. That City Link tunnel from City Hall to Suntec just feels longer each time I walk down the damn thing. So I was like spending the last couple of days downloading the free software form the official Mac Apps Store after installing the new 2.0 firmware. 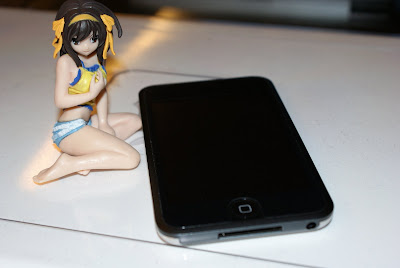 Cool discovery of the week so far. He's baaaaack! My favourite Pulitzer Prize-winning columnist is back. Dave Barry is writing about that sporting event in China right now. Found his latest article while flipping through a copy of the free Today's tabiold. The latest piece is hilarious!
Posted by Cavalock at 10:15 pm 3 comments:

'Freaky, surreal and yet a bit of a turn-on'

The main reason why I set up this blog was to chronicle some of the good, happy stuff that happen to me. Sure, there are currently things that are bringing me down but I rather not dwell on them here.

Well, one of the coolest things that happened to me on Saturday was me making to number 32 out of about 90 players at the War of Warcraft (WOW) collectible card game South East Asian championship. It was a personal best. For a working adult who only plays casually a couple times a week the most, I was freckin’ pleased with my results. Right, now I know what I’m about to write would probably mean nothing to most folks reading this (if there’s still anyone reading this blog, hah!).

Ok, I didn’t make it to the Top 24 to qualify for the finals on Sunday Day 2. But I never expected to anyway, I just wanted to have some fun with my group of friends (3 of us were the Gen Con Oz guys). My friends played often and had more practice than me, but I came out a little higher in the rankings than them. Heh. They were all pleasantly surprised too.

It was held at the World Cybergames Championship at Suntec. We were like the low-tech card gaming session while everyone else was playing the latest video games. We played with lots of WOW players from Thailand, Indonesia and Malaysia too. Real friendly guys. Geez, they must have paid a lot for their rooms during this National Day weekend.

Played total of 7 matches. Won the first 3 games which was already amazing for me. Break for lunch. Now when you win a match, they’ll pair you up with someone who did just as well. So my matches got progressively harder to beat as they day went by, lost 3 in a row after lunch to find my score at 3 – 3. But managed to win the last match of the day to end it at 4 – 3. Not enough to continue to Day 2 finals but a personal best at number 32.

Took some cosplayer shots, yah, between this and Gen Con Oz, I think I’m OD-ing on cosplayers already. And with the dim lighting and loud music/noise, thanks to the all the gaming that was happening around us, I had a splitting headache soon (thankfully) after my last game. 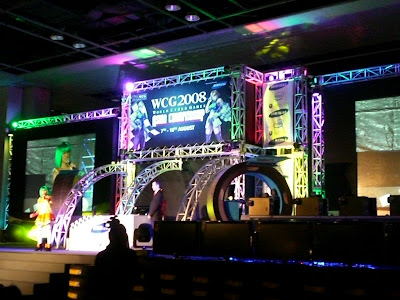 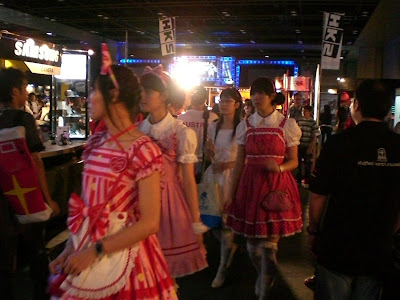 Hey, they pretty much threw themselves in front of anyone with a camera outside the event hall, what was I supposed to do? Heh, at least I wasn’t like some of the other guys who came in full hardcore photographer’s gear. 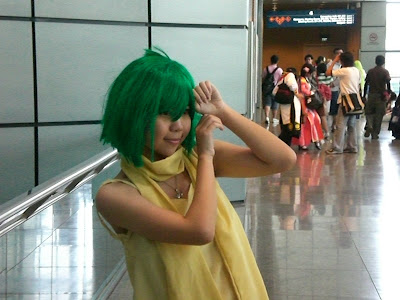 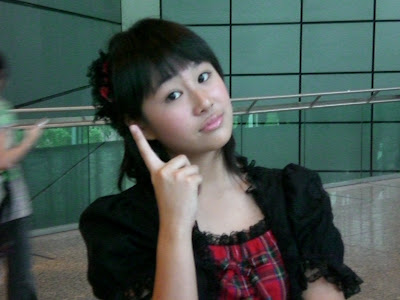 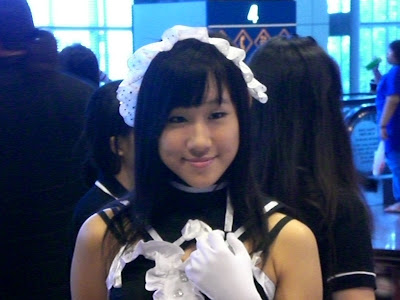 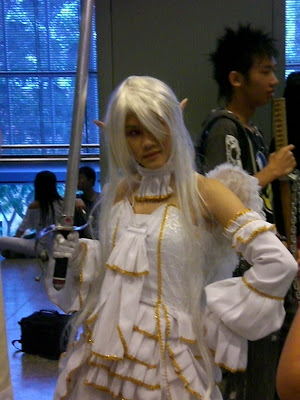 This here's actually a dance routine, without any music. Freaky, surreal and yet a bit of a turn-on. 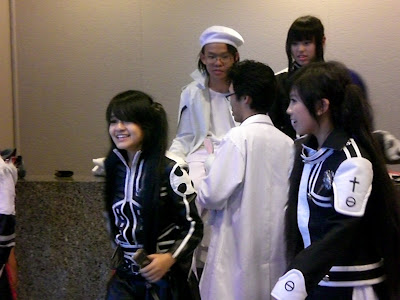 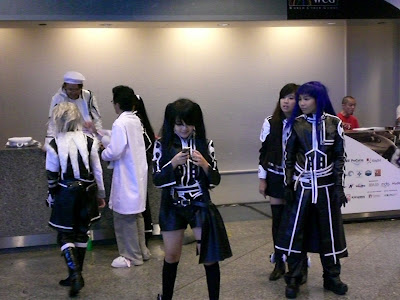 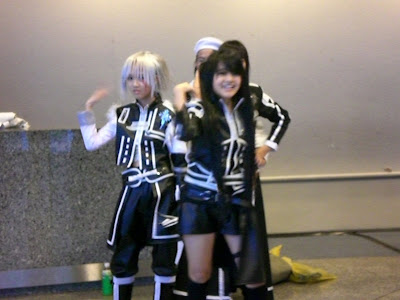 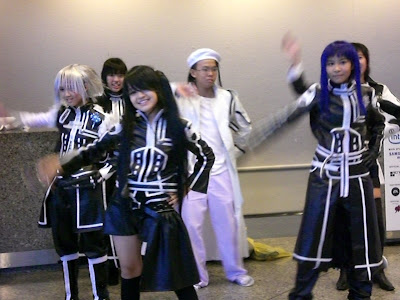 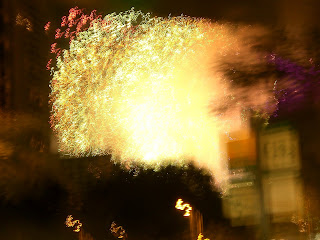 Whoa, this is getting serious. I just placed a S$350 online bid for an unopened 8GB iTouch. It’s going for S$498 at our local Apple stores. See how it goes … it’s not a must-buy for me. If I can get it for that low price, cool. If not, never mind.

I already made my big-budget-electronic-gadget-purchase-for-the-year earlier this year. So I’m a little hesitant bout making another one so soon. But if I can get it for almost S$150 cheaper than retail, why not.

If I do get it, it's gonna be hell transferring all my Palm data to my iTouch! Plus my existing iTunes music files are all on my PC, thinking of moving everything over to my iMac. Any suggestions?

Cool music discovery of the week, thanks to office iTunes network. Metropolitan by Helicopter Girl.

'A brick in my pocket'

Man, I'm this close to geting an iTouch! I have been crazy bout the iPhone cos of how big and heavy it is for a cellphone. I prefer a small and light model cos I usually carry it in my jeans pocket. Can't imagine a brick in pocket with all my other stuff.

BUT I am crazy bout the Apple Apps Store and all the software you add to it. I been using a Palm since forever and everybody knows what a sad state the Palm is today. So when I saw all the cool stuff you can add to your iTouch and iPhone just like Palm 5 years ago, I figured this is probably what I should get!

I'll still looking at the price S$498 for the 8G model and wondering if I should just wait till next month's IT Show or something...
Oh yah, was at P.S. Cafe yesterday afternoon, the one at Orchard, not the one at Harding Road. First time there, very nice ambience and great service. Had the Crab Tart below, it was alright. What really made me sit up was the number of young attractive, single women here. Single as in they were with their girl groups, no guys with them. Was like some chick hangout place.