Cavalock and The Comfort Food Extinction

So we actually joined the masses in checking out Japanese Food Town, that new row of specialty Japanese restaurants at Wisma Atria. Strolled pass Nabe Seizan and was promptly seduced by the lunch wagyu dashi set meal. We are huge fans of dashi and have never been able to find a good meal here since having it in Japan. Now with it's Japanese Michelin-star lineage, Japanese chefs, ingredients and limited to only 10 lunch sets a day, how could we say 'no'? 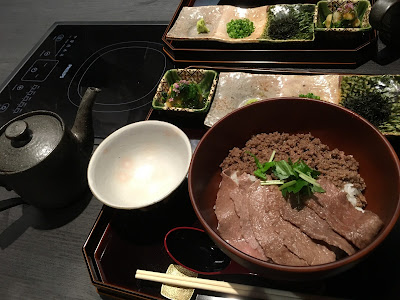 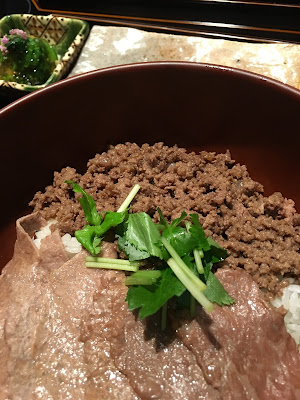 Yah, it's a little pricy at S$38 a meal but we really enjoyed it. The Japanese chef came out and described the meal for us. Not often you get this kinda personal touch. Extremely tender beef and the best part was pouring the dashi broth into the rice. Absolutely loved it. 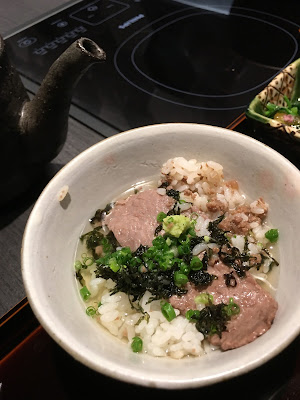 And then came the dessert. Just when we thought the meal couldn't get any better. Another Japanese (pastry?) chef introduced us to an all Japanese-ingredient creation. Sugar pudding with pineapple from Okinawa and Japanese white wine jelly. 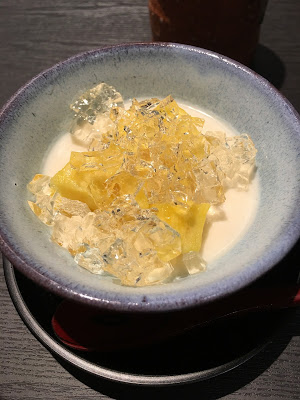 Aaarggh!!! What did I ever do to deserve this? What did I ever do to the Michelin Guide that they had to come ruin my comfort food? Now there's no way I'm ever gonna get to eat my favourite bak chor mee thanks to them getting getting a Michelin Star. Yah, of cos they deserve it, it's crazy vinegary good! But with queues starting as early as 9am in the morning and stretching to well over an hour, ain't no way I'm be slurping any of their mee pok noodles anytime soon. Gone are the days when I would drop by for an early dinner at a little after 5pm when I'm done with cleaning the apartment and stand in line for maybe 20 minutes top. And no, if you don't know where they are, I ain't saying. 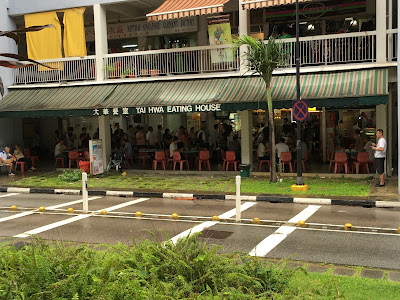 And now this. Looks like it's catching on! More wash pole patriots! 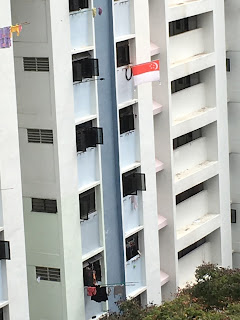 I must have walked past this Marutama Ra-men along Killiney Road a gazillion times to and from my old family home, but I never thought bout dropping in cos I figured it's just like their other outlets around the island, hawking the usual ramen dishes. Oh, how wrong I was. 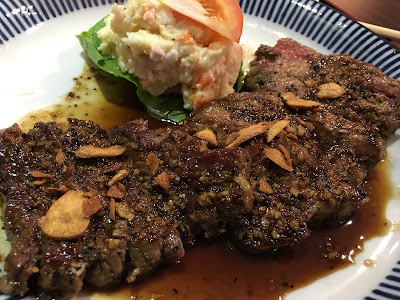 Three words, Garlic Steak Rice. Tell them how you want the steak done and it comes back you just the way you want it. Sprinkle as much fried garlic as you like over it and trust me, I like them lots. This is so good and a set meal goes for only S$23. I believe this is the only Marutama Ra-men restaurant that serves this dish. I could be wrong. Besides their signature ramen, there are also quite a selection of donburi and sashimi on their menu. 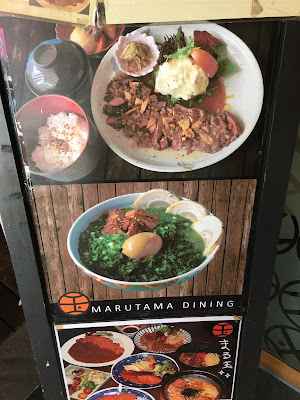 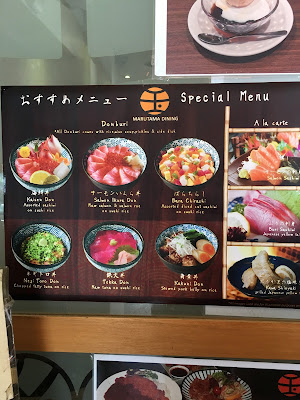 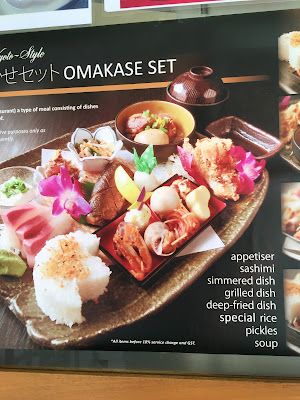 Hey, is it already that time of the year again?!? You bet it is! National Day is never complete for me without this ...er... mesmerising sight of our national flags hanging on bamboo washpoles, fluttering in the wind. Every year, I honestly look forward to this more than any fireworks display especially when the person mixes and matches his or her hanging laundry with the flag. It's priceless. 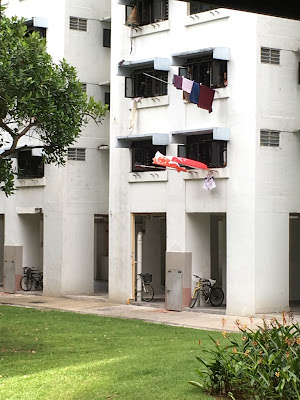 So there I was, off to another foreign land! Even it was for a mere 24 hours in Kuala Lumpur to cover a gaming event. Traveling alone is always interesting especially when it comes to looking for food. No plans, no reservations, no maps and often no idea where my next meal will be coming from. 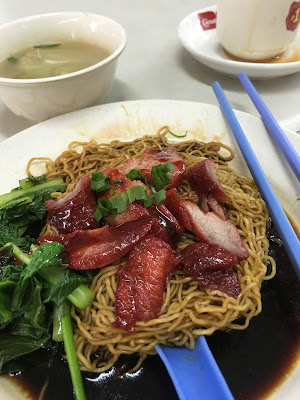 I was in the Sri Hartamas district or township of Kuala Lumpur for a day and prior to that, I had never heard of the place before and decided to look up online about the area. Although there's not much shopping to be done, it's a pretty good or "affluent" neighbourhood with more than a few restaurants and watering holes. Lots of expats too. Kinda reminds of our Holland Village except about three or four times the size I think. 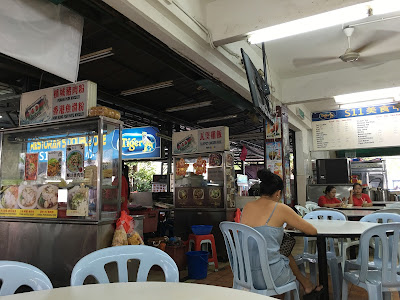 The morning after, my quest for some local breakfast led me to a small and quaint hawker centre. I saw it the previous night on my way back and made a mental note to drop by the next morning. I love street food, its something we don't see anymore here and I think that's a pity. Can hardly go wrong with some KL wanton mee. Not a bad hearty breakfast for only six ringgit. Other breakfast stables I spotted include pork noodles and Penang char kway teow. There was my favourite three-layered tea too but I thought that was way too much gula melaka and evaporated milk for the morning. 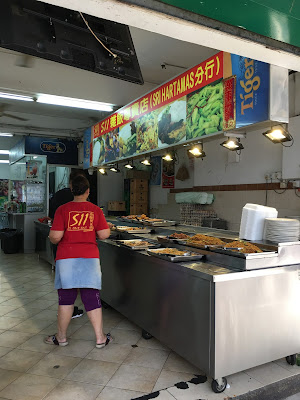 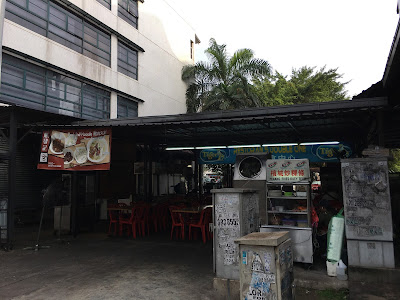 A sleepy little slice of KL that I reckon is about a half hour drive to the main city district, well, that's what the concierge told me. And based on my 24-hour stay, I certainly wouldn't mind coming back for a more relaxing stay. What I'm not looking forward to is the hour-long cab ride from the airport. Been ages since I did one of these hit-and-run missions assignments. Heh! 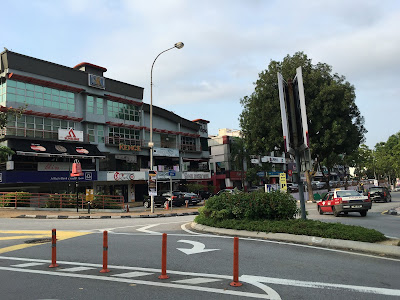 Still getting used to the new trackpad of this MacBook Pro. Took awhile but it's time for the obligatory overseas food college. I could go on and on about the incredible food in Osaka however methinks I should take a break. But a couple of shoutouts first. 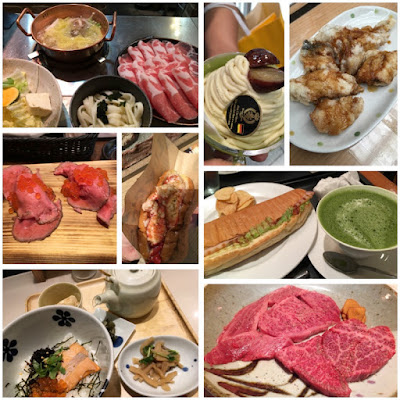 Tsurugyu restaurant in Osaka, Chuo Ward is so popular that we had to make reservations in Singapore. Great Kobe beef and a very helpful waiter who explained to us, the finer points of Japanese dining. Don't take my word for it, here's a ton of reviews.

We found another Luke's Lobster too near Shinsaibashi Station! Long queue but it moved really fast. Spent some time at Doguyasuji (cooking tools street) where you can find all kinds of kitchenware. Yes, of cos we bought stuff there. As for the wackiest thing we saw in Osaka? Well, I dare say it's this. And no, we didn't bother to step in at all. 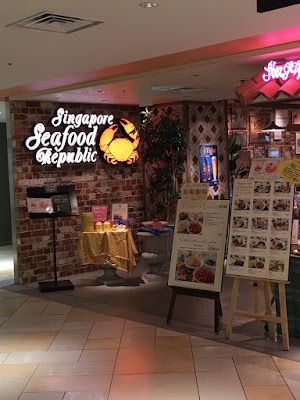 Cavalock and The Freshness Extraction

So what were the freakin' odds of both my iMac and MacBook Pro both crashing within 24 hours of each other?!? Well, finally back online with a new MacBook Pro and yah, it's still another Osaka post. 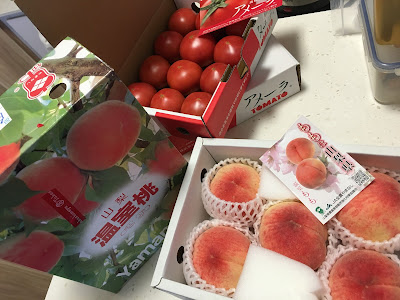 We have now made it a point to always lug back some fresh produce whenever we are overseas. This Japan trip, it was more juicy tomatoes and peaches again. These gorgeous peaches hail form Yamanashi, that number one producer of grapes, peaches and plums in Japan. Hey, how's that for something educational? You do learn something here at this blog after all. ;) 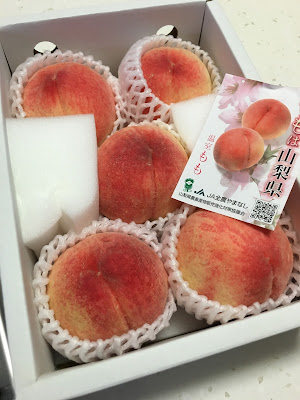 Bought two boxes of tomatoes, each for about S$20 I believe. Saw them on sale here in our local supermarkets for about 3x price. Same with the peaches. Ridiculously priced. Seriously why do people still buy stuff here? I mean, almost everything here is way too expensive. I stopped buying stuff here ages ago. In Tokyo last year and Osaka this year, I got a couple Uniqlo t-shirts and a short-sleeved Beams shirt, and that's all the wardrobe I need for the next few years. Oh yah, there was a pair of pretty cool sneakers from Bangkok too. But really, almost everything you find elsewhere is so cheap compared to what's on sale here. Some days I really do wonder why our neighbours come here to shop in the first place. And don't get me started on the food. 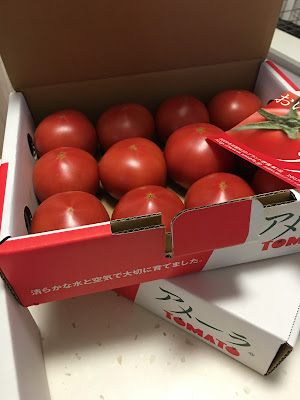 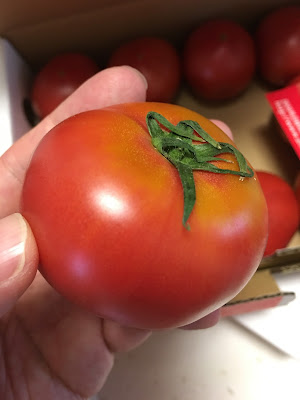 Posted by Cavalock at 1:00 pm No comments: