Here’s something strange. I haven’t stepped into Plaza Singapura mall for like, months and months but since last week I been there three times. And all three times, I been eating at BrukFAUST (hah!) shop at the basement. The Grinders Coffee flat white is a must-have! Here’s the bacon and eggs sandwich with BBQ sauce I had for lunch. Will probably try one of their hotdogs next time. 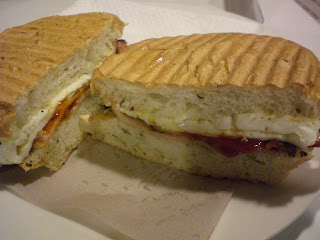 Anyway, checking my budget application in my iTouch and it looks like I waaaay overshot my book/publication budget for the month. Should have known S$30 for a month was just wishful thinking. I blew almost S$60 already and it sure didn’t help with the Kinokuniya sale last weekend. But I still think it’s good to have the budget application cos I know that if I didn’t, I would have blew almost a hundred bucks on a whole bunch of other books, mags and comics that day. I looked at my iTouch and I knew I had to stop.
What else did I overspend? Under the Misc. column, I OD on that too. Same with action figures category. BUT I'm still within the overall month's budget! That's cos I have yet to overspend on my wardrobe, household groceries and gadgets!
Posted by Cavalock at 8:38 pm 4 comments:

*Whew* what a week. Working my @$$ off in the office. So far the recession is biting me via no freelancers to help out so I'll super busy and the sky high, crazy Yen exchange rate means no Tokyo vacation for me this year.
Yup, looks like this is one year that I won't be visiting Japan. Anyway, here's something that cheered me up on Saturday morning. A big breakfast at the Brukwurst Shop at the basement of Plaza Singapura.
A very, very nice flat white. 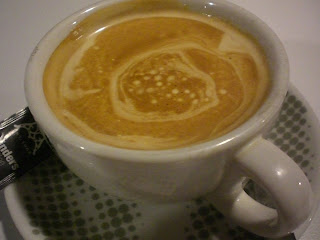 My breakfast, part of it. Hehe! 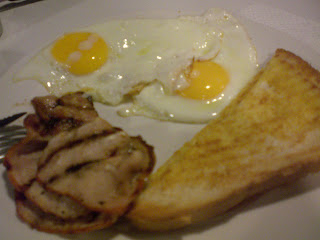 Here's the other part. Ok, I didn't have three pancakes, only two! And I'm still skinny! 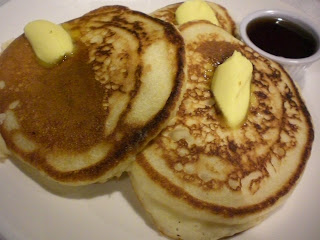 'The last time the French saved me'

Let's see now, the last time the French saved me was a few years ago during a footbal bet. Last nite, they did it again only during dinner, not over a bet.

Dinner was at Absolute Haven along Prinsep Street, I must admit I haven't actually been to that row of eateries before. Have passed it many times but never really found an excuse to dine there. So anyway, our group of like 10 I think, had dinner there and well .... we all agreed the food was alright but not that good to make us wanna go back there again. The medium ribeye I was tasted rather bland, a friend who had the same said the ribeye at Jack's Place was better. The asparagus wrapped in cheese starter was quite crunchy and good.

The pix are a little dark cos I didn't wanna use the flash. 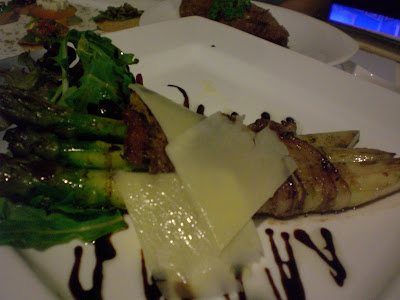 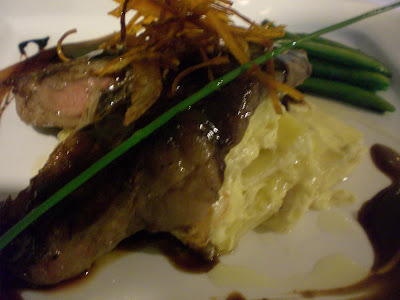 So anyway, after that we headed to another new place (at least to me) Crepere des Arts for drinks and dessert, also along Prinsep Street. Guess what's their speciality?

The French expat in our group brought us there. We had lots of crepes and we opened a couple of big bottles of apple cider brut. And gawd, what a great way to end an otherwise-average dinner. I have always luv cider since I was a kid. I had 2 cups of it last nite. That was good.

The crepe I had (shared) was a simple one, no toppings or ice-cream for me. Light but perfect. I may be wrong in what went into it but it had lemon squeezed over it and a little sugar over it. I would definitely come back. And they served WARM cream with their coffee! Believe it or not, not many places do that, it's always cold milk from the fridge. Hate that. 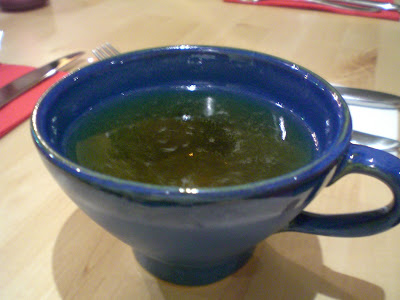 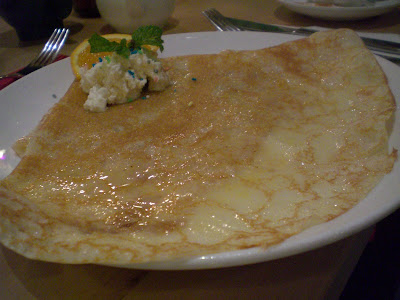 But the highlight of the day was this little purchase. An impulse buy when I was watching Tropic Thunder (great show!!!) at Cathay eariler in the afternoon. Something I would recommend to any food blogger, not that I call myself one. It's a little fun thing I thought, a little pricy S$30. An ex-colleague had shown me her copy a year ago and said she got it from a shop in Cathay. So I figured since this is like, my second ever time in Cathay (really!), I'll go look for it. Saw it before the show and only made my mind to get it halfway during the show in the theatre! <^;^> 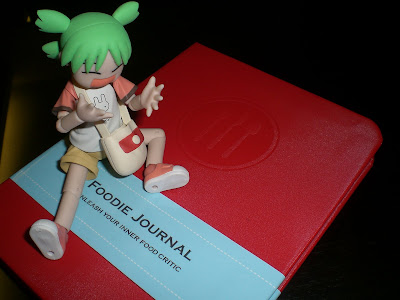 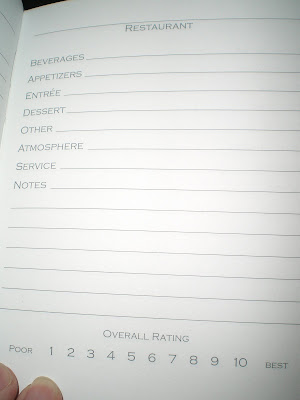 'Treat myself to the good stuff'

Am liking the budget application in my iTouch. Good cos it serves to remind me if I’m gonna be overspending on something. My ‘eating out’ budget for the month is S$500, and that includes mostly lunch, dinner and weekends where I’ll treat myself to the ‘good stuff’. Doesn’t include groceries or homemade meals. Well, it’s the middle of the month and I have spent less than half, $240.51 to be exact! Like I mentioned in my eariler post, the biggest bill so far is still the S$52.96 lunch for 2 on the first of October, a public holiday.

I gave myself S$100 on transsport and so far I have spent S$59.70 already, but that's cos S$50 was spent on topping up my train and bus card. Oh yah, the name of the software is Spend at the Apple Apps Store for only 99 US cents, but you can get a limited free version Spend Lite for free.


Bought into StarHub's video-on-demand for the first time, just to catch the first episode of CSI's new season on Monday nite. That's like 3 or 4 days after it was first shown in the US! Ties up last season's cliffhanger nicely. Might do the same for CSI: New York and Miami once I finished watching all of last season's episodes.
Posted by Cavalock at 11:47 pm 2 comments:

Well, it's a Saturday nite and I'm home blogging (don't worry, I am recording Best of Saturday Night Live on cable right now). Its been a crazy work week; up till waaaaaaaay past midnite from Monday till Wednesday. That's why the office went a little party crazy on Thursday and Friday nite. So its like home only in the early morning for the whole week, either cos of work or out drinking, and this Saturday nite, tonite I'm gonna turn in early by which I mean before midnite. <^;^>

But I was out in town in the morning till afternoon and all I can say is 'What recession?!?', the malls are packed, long Qs at the cash registers, everyone's still buying lotsa stuff. Oh, yes I do read the papers ... am just saying if you look at the crowd at Orchard Road today, you wouldn't know there's a global credit crisis. 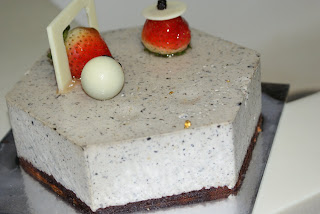 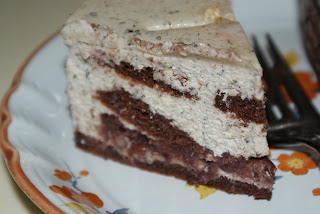 'The good stuff on weekends'

So I got this new iTouch application that does my budget for me. Used to have something similar in my old Palm. So I’m thinking like S$500 a month for eating out…wonder if that’s enough. Doesn’t include groceries of cos but it does include stuff like snacks and drinks. Keeping my weekday lunch to bout S$6 average, not over S$10 a day. That’s just lunch. And if I have the good stuff on weekends, I hope S$500 is gonna be enough. For instance, last Wednesday was public holiday and I blew $52.96 for lunch for 2. What else I got? I set like S$100 for transport and …er... S$100 for entertainment/gadgets. The good thing is the software lets you snowball the money that you don’t spend so if I don’t buy any gadgets for 2 months, I’ll have S$300 in my third month to blow on some new stuff.

Still on food, here are some pix of a little something I prepared for dinner. Real simple stuff. Some baked mushroom, Japanese style. Got the recipe off a magazine. 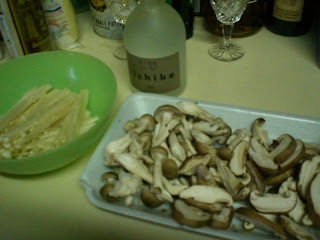 Like I said, pretty easy. Just place your favourite mushrooms on a buttered piece of foil. Add Sake, I added 4 teaspoons and my own little special ingredient, Chicken Salt! 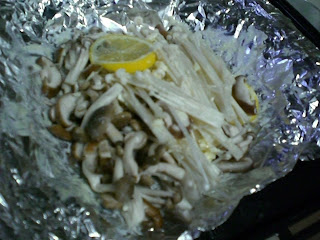 Bake at 220C between 5 to 10 minutes, depending on how much mushrooms you got in there.

All done! I liked it and so does Yotsuba! 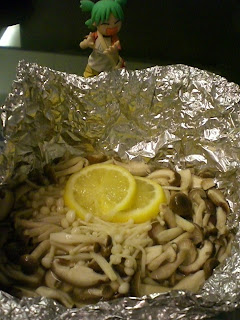 'TV has been pretty good'

My last post on breakfast got me really thinking bout more breakfast stuff.
Been heading to Freshly Baked at Killiney Road recently on Saturday mornings while visiting my aunt who lives down the road. Heh, my elderly aunt and mom are big McCain supporters, I dunno why I’m saying this but I just find it highly amusing that two little old ladies halfway across the world are so into the US elections.
Anyway, I’ll usually get the cranberry buns and the banana loaf at Freshly Baked. But they were out of banana loaf when I was there this week so I tried something new, the coffee buns. 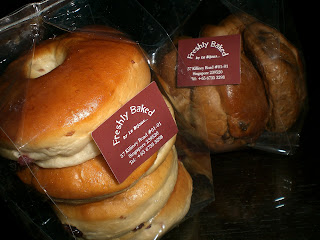 Didn’t really like the coffee buns, a little too bland and dry for my taste, don’t think I’ll be getting that again. The cranberry buns are light and soft, just the way I like my bums. Both packs of 4 are S$3 each. I believe the single banana loaf was like S$6 for one. They have a breakfast menu for $9.90 (I think) that I’m very tempted to try the next time I’m there. 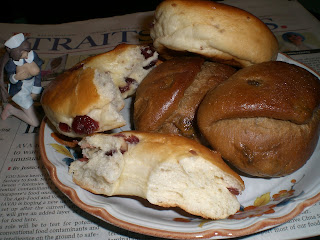 Yes, I had 2 of each for my breakfast this morning, plus a cup of instant coffee.
Oh yah, TV has been pretty good to me lately. Been catching up on my CSI: Miami and Reaper. Also really looking forward to the Best of Saturday Night Live coming on 11 October nite.
Posted by Cavalock at 7:36 am 5 comments: