Cavalock and The Hashtag Heresy

How I wish I could say that the reason for the infrequent posts is that I'm off jet-setting around the world. The truth is things have been frightfully dreary of late although I must admit I'm having slight difficulty in recollecting the events of the last few weeks. Let's see now, I am still caught up in the seemingly never-ending process of clearing the old family home as well as another of my late uncle's apartment. Which leads me to this re-discovery I made not too long ago, a most intriguing pair of stone goldfishes from my childhood. 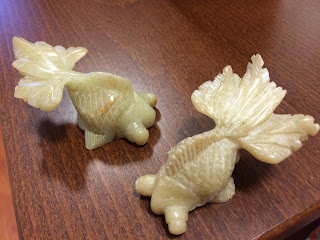 I vividly recall toying with them when I was a mere toddler. Well, such as picking them up from the desk, spinning them (gently) around and imagining them swimming in the air I suppose. I must admit I have no idea how much they are worth. The pair have been in the family for as long as I can remember. I'm also absolutely in the dark as to what kind of stone they are as I'm positive there's a proper name to the material too. It's not jade or marble but it has a nice smooth touch and feel to it. And as you can see in the final pix, there's a name or inscription at the bottom of one of the goldfishes. I suppose my only hope is that the name belongs to a famous Chinese craftsman and ... ka-ching!!! ;) 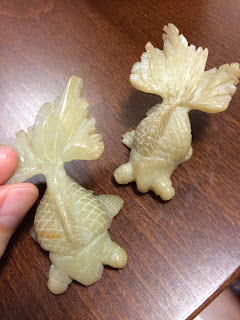 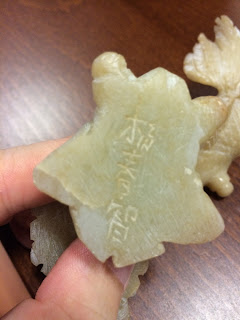 So what else have I been up to? Finished reading The Scarlet Gospels by Clive Barker and binge-watched Jonathan Strange & Mr. Norrell as well as the third (and thankfully final) season of The Following. Penned a short Cthulhu-inspired horror story and sent the draft out, still waiting for some feedback. I certainly hope the reason for the lack of response isn't a reflection of how abysmal they found the tale to be.

Of cos, the board gaming evenings are still a regular occurrence, at least twice a week. To be honest, the reason why I'm recounting all this escapes me. Perhaps I am merely engaging in this little mental exercise simply to justify my last couple of weeks' existence? 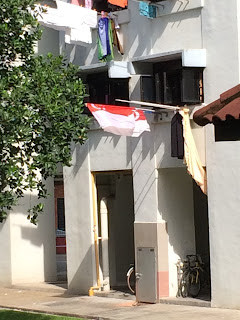 It's less than a month till our National Day and you know what that means! Keeping a decade-long tradition alive, here's this year's snapshot of the washpole patriot!

Oh yes, I did spend some time recently on social media or Facebook to be exact. I am quite puzzled by the overwhelming use of hashtags in more than a few of my ex-colleagues' posts. I just do not understand the need to punctuate your 3, 4-word post with up to over thirty hashtags. Among the multitude of hashtags in that single one-sentence post, I spotted the hashtags 'excited' and 'Italy'. Wouldn't it be much more eloquent to write something like "We are so excited to finally be in Italy"? How difficult was that or did they forgot how to use nouns and pronouns? Is this a thing now that people use hashtags instead of proper grammar?

There are times when it's just a mountain of infuriating hashtags, no sentences at all. It's not unlike some maddening puzzle where one tries to make sense of the message by adding adjectives, pronouns and punctuation. I honestly don't know if all these hashtags is pure laziness or some new hip thing.

The washpole patriot is dedicated!

And ugh. I feel your angst with hashtags. Reading a paragraph of hashtags is.... can die.

The washpole patriot is one-of-a-kind. ;)