Me, Two Men And A Kid

Hardly watch TV these days but Two and A Half Men…damn, that’s a good show. Probably the most memorable line for me was when Charlie Sheen’s playboy character was asked. “Women: Disposable pleasures or worthwhile pursuits?” and he had to pause to think of the answer. Truth is, that’s pretty much how I would have reacted years ago. Servant of Chaos, remember?

Then there was the episode where he told guest star Teri Hatcher the mental image of them having sex years ago was "lighter fluid when I'm barbecuing alone."

Cable's showing the first season and I'm checking out some episodes (Xmas episode, best opening ever!) of the current season four on You Tube. 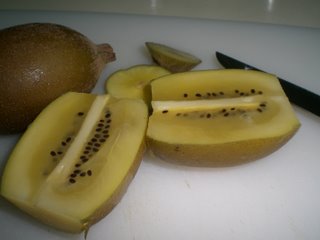 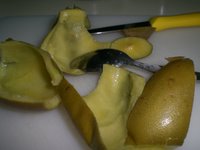 Speaking of guys, here's how a guy eats his fruits. No need for plates, just cut it up and eat it on the cutting board, over the kitcken sink! The kiwis were really soft and sweet. Slice it in half and you use a spoon to scoop it up. Think the last time I had fruits in a (proper) bowl was at my mom's place.

I guess when you are on your own, you kinda wanna do things your own fast-and-easy way. I eat more stuff outta their original containers!
Posted by Cavalock at 10:13 pm

agreed! when i was living on my own (i.e. no maid), i drank out of bottles, ate out of tubs. scooped watermelon out of its skin. the less to wash, the better!

I love kiwis. And I too, despite being a woman, eat fruit off the cutting board in much the same manner, although sometimes not even standing over the sink! I do live alone but I wonder how much this would change if I did have a roommate?!

I haven't watched much of Two and A Half Men but I've heard that it is a good show. I love the lighter fluid comment! Do you ever watch the American version of The Office? That and Lost are really the only television shows I am committed to.

You must be joking ... a knife and a cutting board.

I might use a knife, but I genrally just cut things in the air or in my hands.

I will only use a knife on a kiwi if it is for a salad or my kids, I just use my thumbs to tear it open and go after the flesh.

Imp: yup. No-frills all the way!

B: yah, I catch Office too but not every episode. Season two of the Office comes on just before Two and A Half Men on cable. I’m usually doing my chores (or whatever) before Two, so I just catch little bits n pieces of the Office.

Richard: Hah! You must have very strong hands or fingers! Won’t the fruit get all crushed n mushy if u just tear them apart?

I would categorize the kiwis we get here as "firm". They are usually only mushy if you have dropping them a lot.

Sure, some juice gets lost, but if I need a kiwi fix, I don't want to wait.