Cavalock and Batman with Wonder Pig

So much for that long May Day weekend. Real-life is stranger than reel-life as we saw our local version of Star Wars: Revenge of the Sith come to an apparent end but with a happier ending. Wonder if there’ll be a sequel. You just gotta luv the part where the Empress reveals herself and the saber-rattling part at the end too.

Other weekend observations, Borders at Wheelock…such wasted potential. They have a pretty decent friction section, I actually found some sci-fi books that I don’t see at Kinokuniya. BUT they are soooo messy and the books are in such a sad state, torn sticky price tags, single dog-eared copies etc. Now I’m talking bout the fiction section here, the rest of the place (cept for the kid’s section) are in pretty good shape. The magazines are still cool, non-fiction books are ok although I still can’t get used to their layout. Is it just me or do they keep changing? Now if they would only lower their damn prices…

Had teochew porridge at a popular kopi-tiam along Joo Chiat, right next to Dunean food centre. Good stuff. Snapped a couple of pix, not the best angles but there you go. Question, does anybody know what that fish is called, in English? It's called 'black fish' in Mandarin. 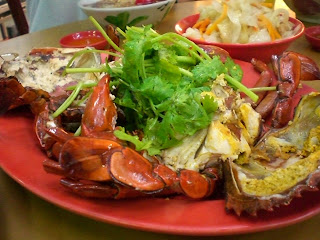 Anyway, was also making some plans on what I’ll be doing after my last day at work, that’s like in two weeks’ time. One of the things is to get back in shape, yup, will try to stick to some kinda morning workout. The cheapest would be to run up and down 22 flights of stairs every morning. More on my other non-workout plans another time.

Check out what I bought. Another Batman figure! This one's different, it's a fan favourite figure (voted by fans) from the old Justice League Unlimited episode where Wonder Woman gets turned in a pig by the sorceress Circe. And you get a figure of Wonder Pig, complete with the magic bracelets! According to online reports, this is a pretty rare find. 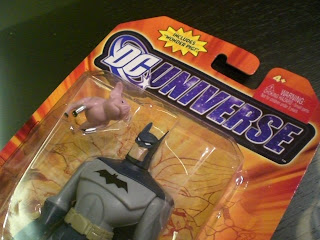 well, I thought it’s a catfish cos it looks like it had (now snipped off) whiskers. But was told its not.