Cavalock and The Second Obligatory Tokyo Food Collage of The Year

This Tokyo trip, we got the opportunity or rather the Baker-at-Home had the opportunity to chat with at least a couple of young English-speaking Japanese sales staff on two separate occasions. As kinda expected, both were very enthusiastic when it to came talking bout Singapore. One even grew up and studied in Singapore before moving back to Japan. The usual chit-chat bout the local weather like where's hotter right not Tokyo or Singapore, where did they learn their English and all that. We had to sort of dampen their enthusiasm a little by telling what life really is like here. Hah!


Just like always, I got our trip's obligatory photo collage right here, right now! The slice of gorgeous wagyu beef was our first dinner this trip at our usual favourite shabu shabu joint. Damn, I love that pix, never fails to make me hungry. 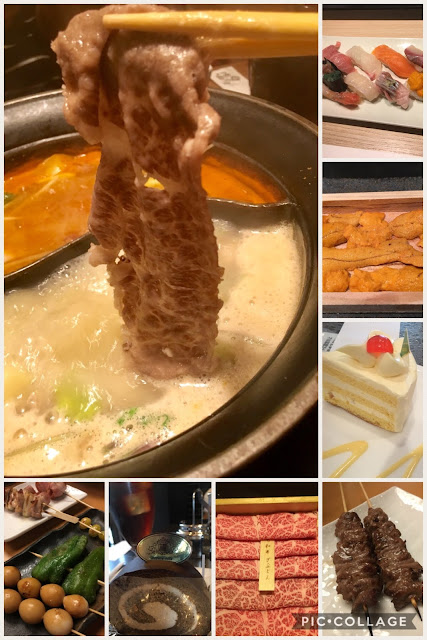 So everyone's talking bout Crazy Rich Asians and it kinda reminded me of something funny. Before I get into that I gotta say, this ain't the kinda movie I'll watch. Nothing bout it being Singapore or anything like that, I just don't buy movie tickets for a rom com anymore. Limited time means I gotta watch what I watch, if you know what I mean. Rom coms are more like "downloadable" movies to leave playing in the background when one is doing work around the house. Movie tickets are reserved for Marvel/DC blockbusters. big budget action movies, the kind better watched on the big screen. But really, let's be realistic here, the success or failure of that movie is not gonna make a difference in the lives of most average Singaporeans here. And to all the folks out there who are kicking a fuss bout "representation", it ain't a documentary, it's a work of fiction. It's like expecting all Italian Americans to be members of the Mafia after watching The Godfather.

Anyway, hearing about Crazy Rich Asians and all the hoopla it's causing reminded me of an episode of my childhood. Now I gotta clarify that I am definitely and absolutely NOT rich at all! I prefer "middle lower-income". Just that it reminded me of how when I was a wee little kid, me Mom would constantly tell me that we are "a poor family" and that if anyone asked me (no one has ever asked me!), "tell them you are from a poor family". So in my mind and majority of my childhood I honestly believed that we were a poor family. The point isn't whether or not our family was poor, the point is I believed her. I mean, what kid wouldn't believe their own Mom. Right?

It's pretty funny looking back. I mean, I remember whenever I wanted a toy, my family would say something like "we can't afford it." and I guess that kinda reinforced my belief that we were poor. Back then friends in school and elsewhere never really talked bout our families' income level or anything like that. So I never really had any reason to doubt my ...er... family's claim.

It was only much later in (adult) life that I realised that I kinda grew up in a bubble. As a teenager, I was perfectly happy with my TV shows, my BBC Worldwide Radio, my books, magazines and comics and later my computer games. There was no Internet or social media so almost everything I learned bout the outside world was from devouring media content from the West. Speaking of which I never felt the need for "inclusiveness" or "diversity", as in I never felt the need to see an Asian face whenever I read a Marvel or DC comic book or watched American or British sitcoms. Maybe if you are an Asian American, Crazy Rich Asians is a big deal cos you are constantly surrounded by all them nasty white folks? But I digress.

I love my crazy (not rich) childhood and I miss my cozy little bubble! Thank gawd there was no Internet when I was growing up. <^;^>