Well, this year's party was definitely a lot better than last year's. Although I had to leave in the middle of last year's party cos of a family emergency. Everyone was saying that the one we had the previous year 2004 was crazier, wilder, cooler etc. And we had a handful of pretty scandalous pix to back it up too. You get the idea, us media folks for better or worse have a reputation when it came to parties, in and out of the office. Yours truly had the honor that year for throwing up and almost passing out at the steps of our grand ol' City Hall.

Along came this year's party at a tiny little bar, let's see now....what I do remember is...

Now the last major drinking session was here. Looks like I got back (at least) one to my four original vices that nite.

Best part, we have all-new scandalous pix. The official photographer left after 10pm when folks were still pretty sober. Later, our 'unofficial' photographer made the rounds and rest is history. More than a few had to be censored before we could put them up on the public server. 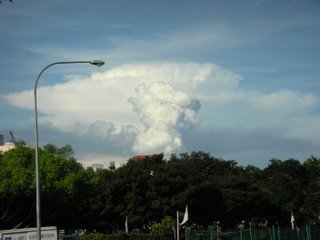 The ol' mushroom cloud AKA what me head felt like the next morning.
Posted by Cavalock at 10:21 pm

Email ThisBlogThis!Share to TwitterShare to FacebookShare to Pinterest
Labels: Days of Chaos, Photos

wow...what a night! and there are scandalous pictures to validate such a night?! :-)

there is absolutely no way to stay sober in Dec!!!

Niki: yah, its another one of those weird pix I took on my way to work! Hah

B: damn right, we got the pix!

Imp: tell me bout it! Went for another get-together on tues nite. Restricted myself to only 2 bottles of beer. Another party this sat nite! BTW, can’t seem to post comments on yr site.