Cavalock and The Case of The Curious Mementos

I must have strolled past Maison Ikkoku a dozen times over the last few months but never found a reason to drop by this popular bar cafe along Kandahar Street until last weekend. A casual suggestion by a friend and we soon found ourselves heading to the cafe for a lazy late breakfast. It's a pretty small and comfortable joint which I suppose puts it in the cosy category. Wasn't in the mood for anything too heavy so I picked the french toast with berries from their all-day weekend menu. It came nicely drenched in maple syrup with a generous serving of berries on the side as well as a dollop of creamy vanilla mascarpone. Yup, it's tenaciously sweet but not that much till it overwhelms me. A very satisfying breakfast that is now giving me ideas to drop by again to try their bar selection one evening. 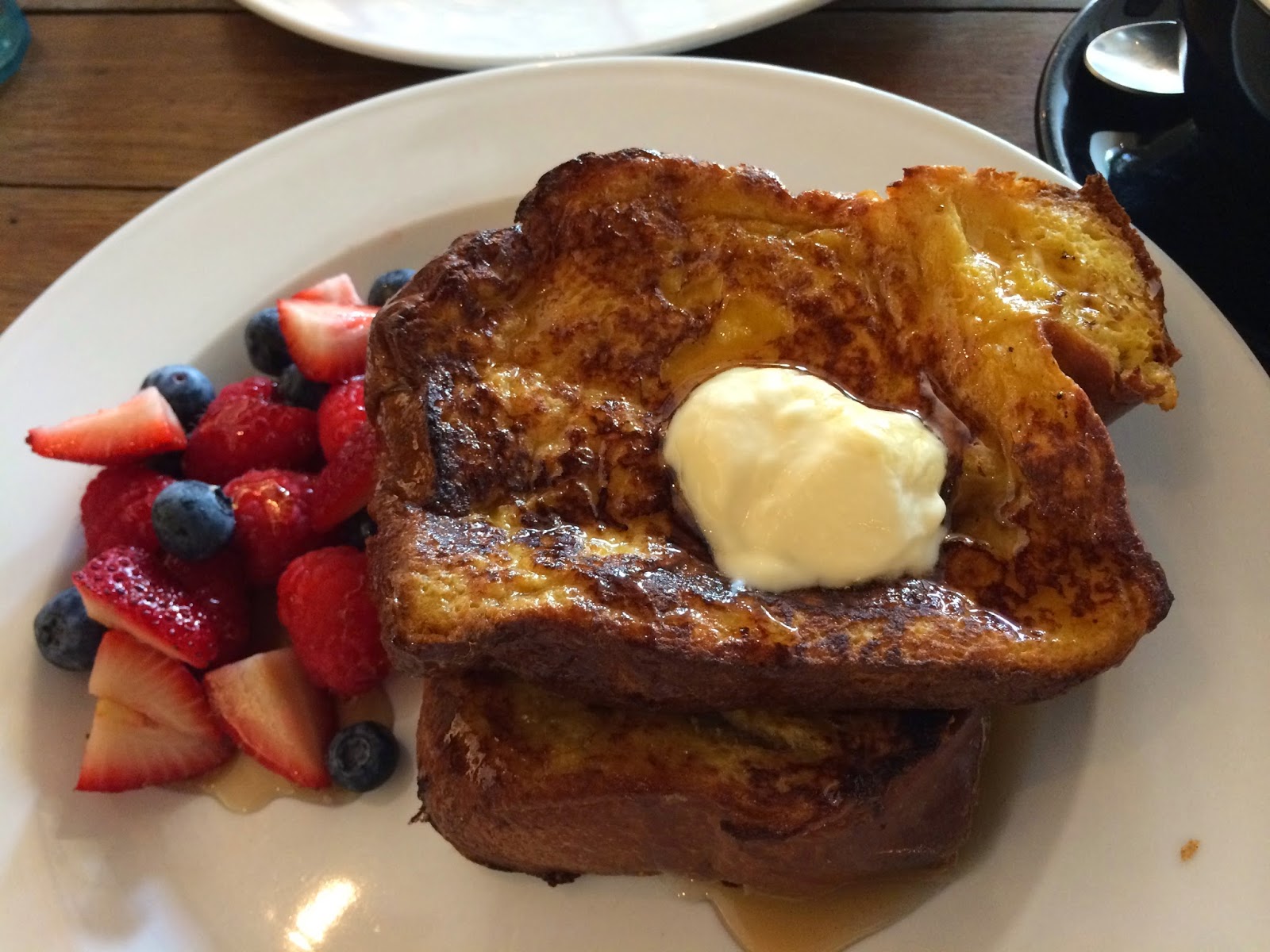 Now my Facebook friends would likely have already seen this, but I thought I'll just post some of the more intriguing items that I have recently uncovered in the old family home. Shifting through a rusty tin box filled with dozens of faded black-and-white photographs and enigmatic handwritten notes, I found an official-looking document that I believe is of a sea-faring nature from 1938. Travel papers for a ship? I seriously doubt if they mean someone somewhere owns a ghost ship? Well, I do know for a fact that my granddad was in the merchant marine trade around early last century and that some of the stranger, older artefacts could well be picked up by him during his travels. But it still gives me goosebumps whenever I stumble upon an unknown piece of arcane history. 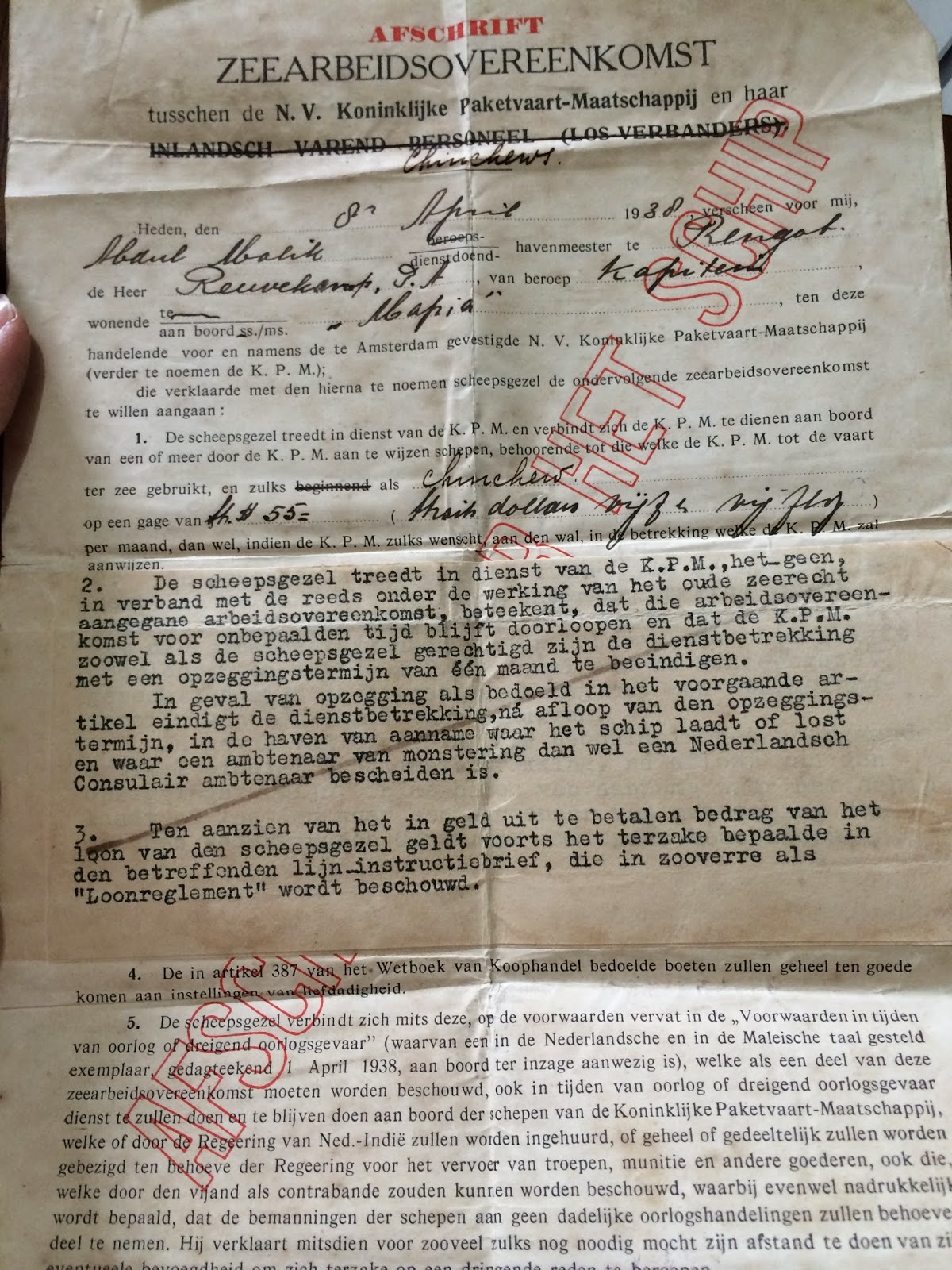 From 1923, here's a German "Weimar Dresden Devil Satan Anti-Semitic Coin Inflation Money". On the front, it reads 'Whether Jew, whether Christian, the usurer is a scoundrel". On the back it reads, "In bad times, no doubt, is a man of many other devil". Having read books and watched countless documentaries on Pre-World War II Nazi Germany, I am a bit familiar with how such a coin or medallion came about, but what I cannot even begin to fathom is how a member of my family got his (or her?) hands on it. Man, if you think that's the most bizarre or even macabre find so far, well, I got news for you. Not today but maybe someday I'll post a couple of the more outlandish ones here. I have encountered mystic relics, Eldritch tomes and enigmatic maps. Some of which I was discreetly but firmly advised against taking photos of. Really. 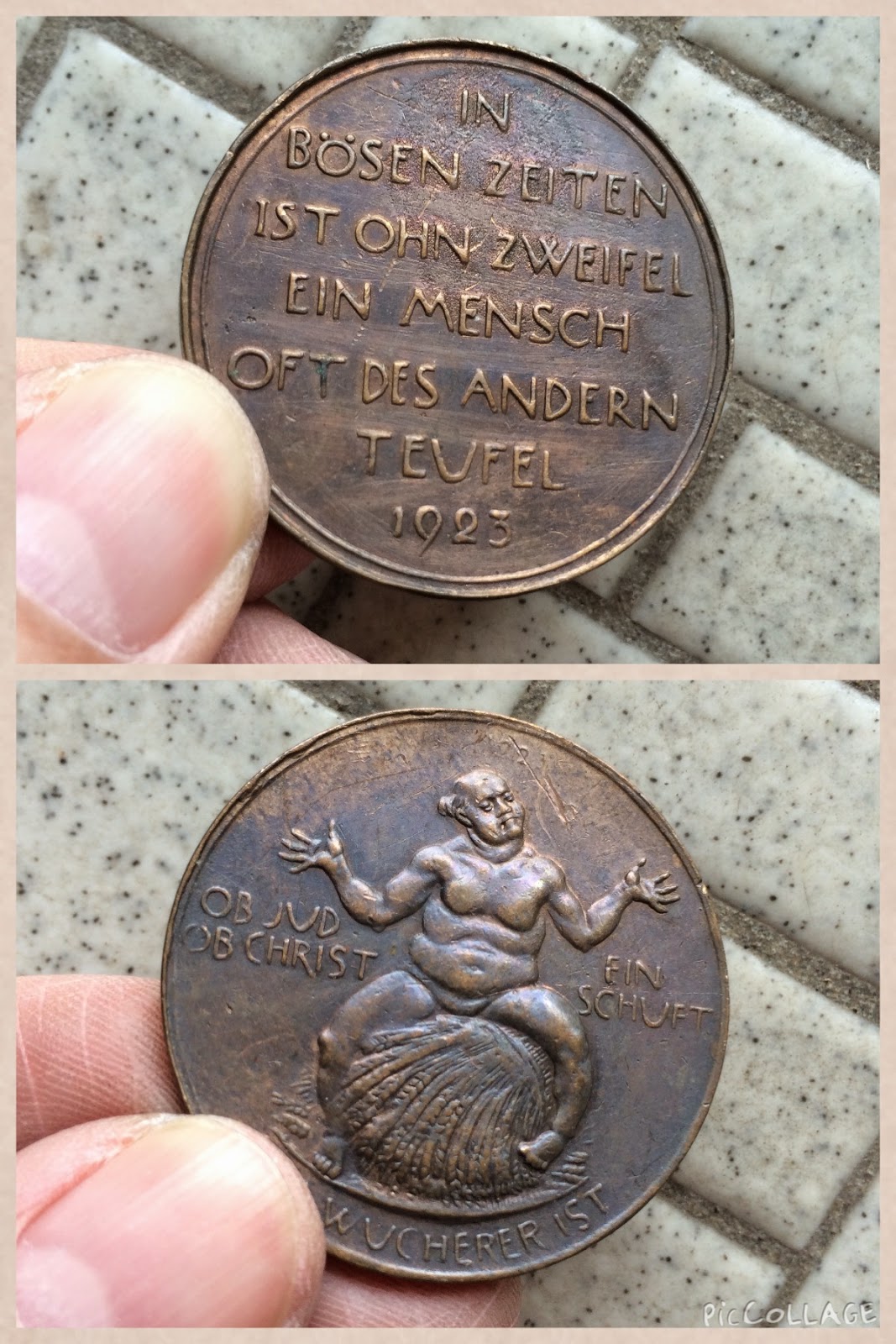 A little closer to home now and I still couldn't believe how I dug this out from the bottom of a cardboard box of old books. I was going "WTF?!?" when I pulled it out and only recognised it as the original edition of a book that has been hogging the local headlines for almost a month now. It's the hardcover first print copy of The Battle for Merger written by Singapore's most famous Prime Minister back in 1961. A nice little propaganda piece that has been in the local news lately. To be honest, if not for all the recent publicity, I wouldn't had known the significance of it. It's still in a remarkably good condition, seeing that it's over 50 years old. Better shape than the author I guess.

One last thing. I am thinking of setting up an Etsy page soon. Several friends have mentioned that I should try to sell my wares there instead of just plugging them all on Facebook. One of the reasons is that I have noticed that most locals aren't interested at all in such remnants from the past. Here's hoping that I can raise a little cash by casting a wider net overseas but do let me know if there's anything you fancy! 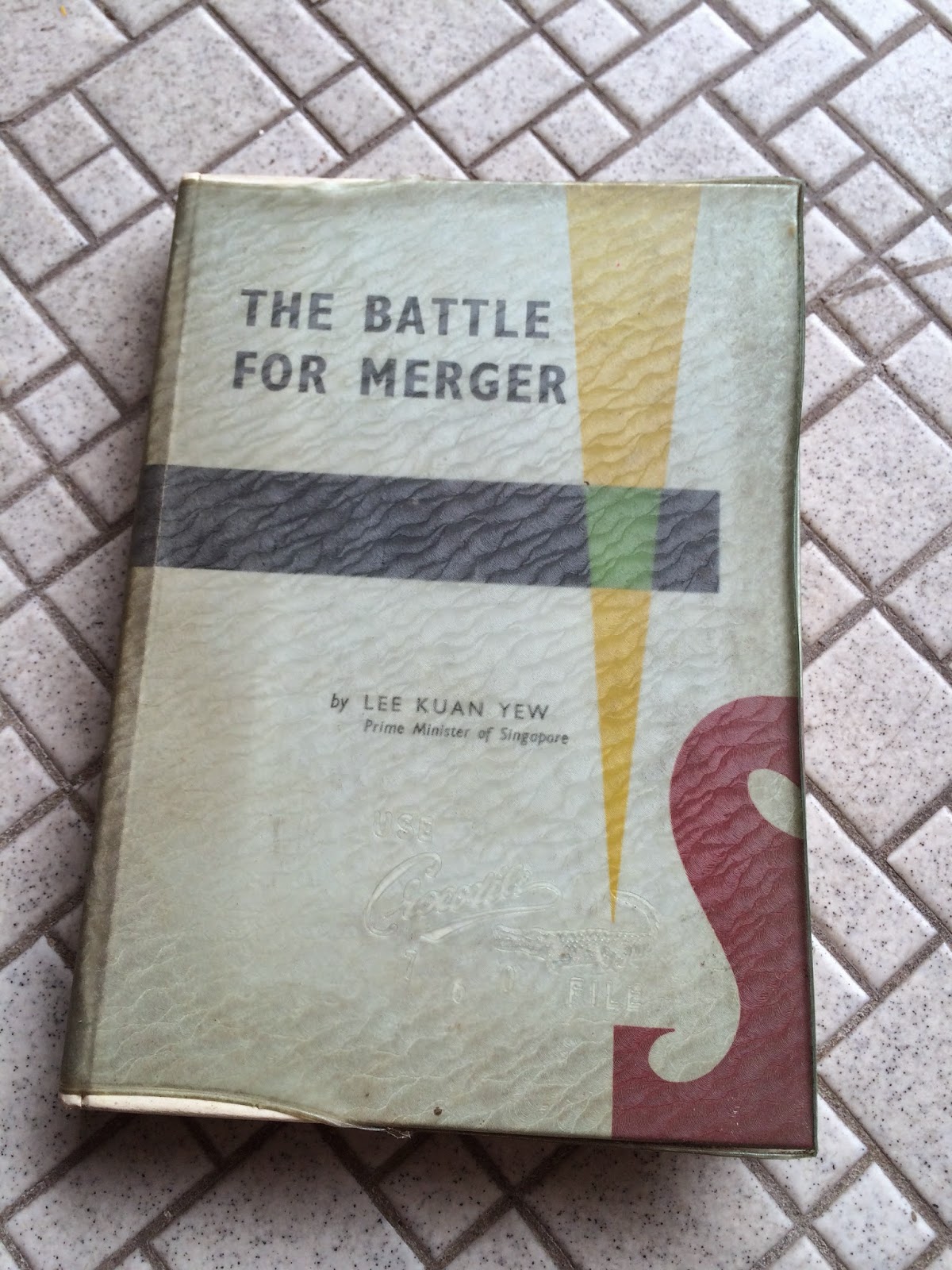 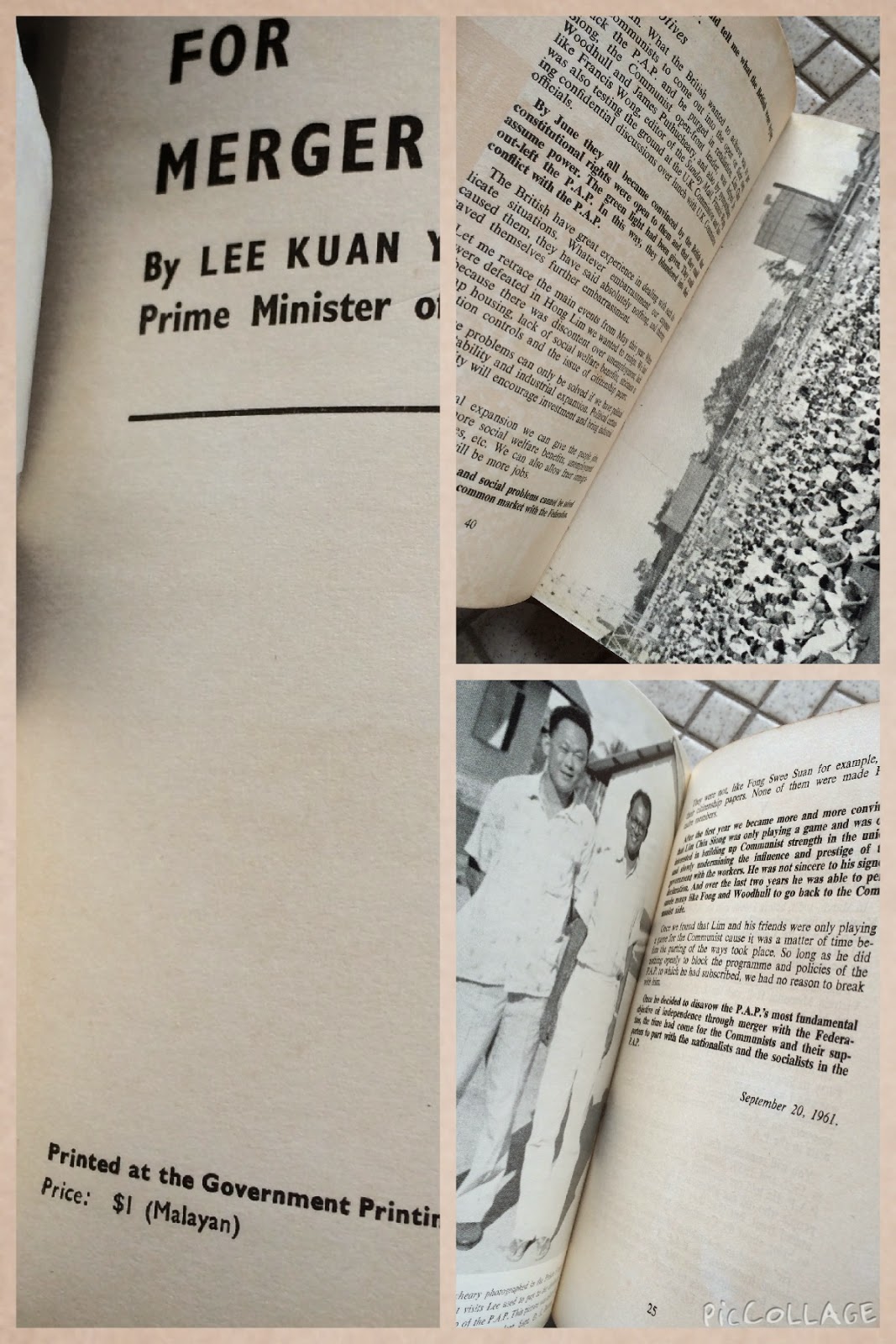