Cavalock and The Japanese Cola Wars

Would I try this if I was back in Japan? In a heartbeat! I tried the Zero Coke back there a couple of years ago, gawd, that was a mistake. Anyway the new Green Tea Coke that's coming out in Japan is due this Monday according to Japan Probe.

And guess what, it's out just in time to do battle with this ... the limited edition shiso-flavoured Pepsi out later this month.

Was back at the izakaya, yah I guess you could say it's my new favourite Japanese place now. Went to the place early this time, bout 6.45pm and in the middle of the week. Slowly the crowd started coming and it's pretty much all Japanese crowd again, including I believe, a Japanese food reviewer and his family as in, he's a Japanese guy who's a magazine food reviewer.
Ordered some new stuff this week, like the ray fin appetizer here. 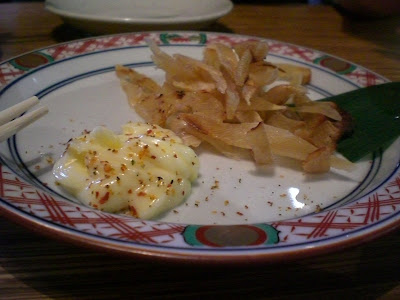 Next was a grilled arabesque. Not as good or as meaty as the spanish mackerel. Had a rice ball too, hey, guy needs his daily carbo. 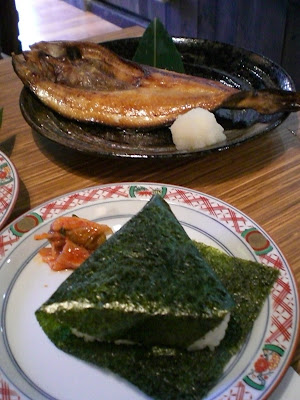 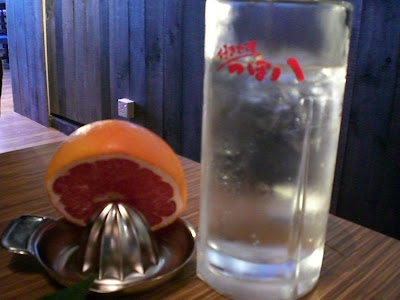 Now comes the funny part, the dishes that were really, really great... I didn't take pictures of. The pumpkin rice cakes! To die for! Two sticks, two round golden rice cakes on each stick. I guess one of the reasons why I liked them is cos they are quite sweet, like a pumpkin I suppose. The other thing I liked was the mushroom hot pot. Quite a simple dish with the mushrooms, pieces of chicken and cabbage but it just tasted so damn good. There's enough for two servings here.
Told myself, next time I'm there, I'll gonna get the pumpkin rice cakes, the grilled spanish mackerel, the mushroom hot pot, maybe one kind of sashimi and couple of jugs of beer. Damn, that sure sounds like a plan to me.
Posted by Cavalock at 8:40 am

I think those return vouchers are evil...

well, hope u had a good lunch!