Cavalock and The Izakaya Experience

Thought of having ramen at first after reading Hungryboy's review, but there weren't any seats yet but I noticed a couple of Japanese heading to this other restaurant called Tsubohachi. So I figured why not? Stepped in and immediately noticed that the clientele was like, 80% Japanese. Hey, you can't go wrong now!

Now this place isn't exactly a restaurant, it's seated and designed like one but if you look at the menu, it's like a 'traditional' Japanese pub menu. And how do I know it's a pub menu? Cos its got a shitload of crazy exotic booze, from sake to fruity liquor! And I also read this book! You won't find sushi or ramen here. Plus I went to their site and it does say that this is their first overseas pub outside Japan. 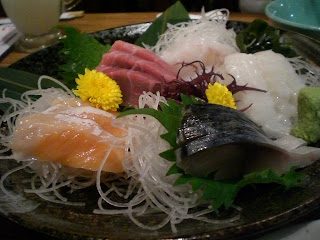 So how was the food? Not bad, there's nice fresh sashimi and this was the nite's BFF, yummy big spanish mackerel. Wonderfully grilled, had a blast picking the bones clean. 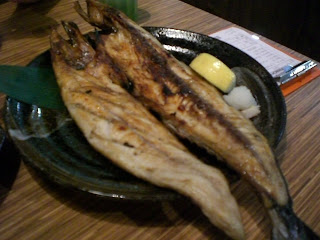 The black sheep was the yakitori platter, five sticks only. Tasted average, no special yakitori sauce or anything like that and they had a 'duplicate' stick as in the same kind twice, not something I like in my platter.

Now here's a little boo-boo I made. Heh, decided to have some beer, so ordered a glass of Sapporo beer. Yup, that's what it said on the menu, a 'glass' of beer. 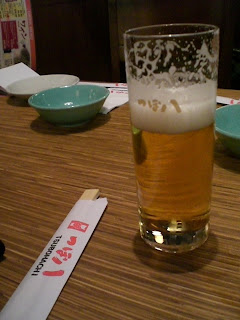 And what showed up on my table was the tiniest, little glass of beer. Pretty much a ladies' drink I think. Hah, finished in a gulp before anyone noticed (I hope) and ordered a real man's 'MUG' of beer! 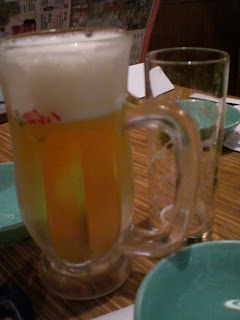 But the best part of the meal was the free $70 worth of vouchers for my next visit! Total bill was just a wee bit over $100. They are having a promotion, I think it'll last till end June. There are lots of other interesting Hokkaido stuff on the menu that I'll definitely try the next time I'm there.
Posted by Cavalock at 6:41 pm

the arts and crafts experiment said...

i was in the bugis area over the weekend and saw that iluma building, too. i was wondering what it was. that area has changed a bit. but i missed everyone while i was walking towards bras basah.

yah, miss u guys too! lets meet up