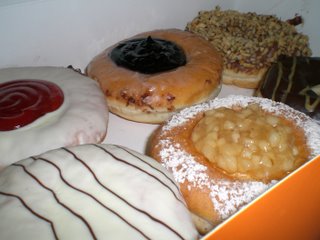 Damn, they better be worth it. And they are....sort of. Not great but I still kinda enjoyed them. Yah, I waited in line at Raffles City for three hours for them. Didn't really planned it that way. The line wasn't that long so I got in the Q. It hardly moved cos the kitchen was small and folks ahead of me were buying boxes and boxes of them. Well, The last time I had a donut 'meal' was in New York seven years ago. 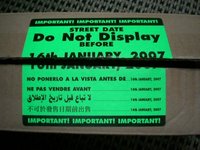 Here's something else I stood in Q for that day. That's an opened case of World of Warcraft: The Burning Crusade. Me and the guys PLUS the other guys from my online guild were at the launch 'party' (I use the term loosely) and altogether, we collected at least 60 boxes for everyone. It was fun standing in this Q cos the rest of the guys were there and we all talking crap together.

In other good news, the national library has FINALLY stocked up on new comic books! After a year of no new stuff, we got quite a lot over the last week.

u sure is a patient man! luckily i had a taste before the shop got popular :)
-skinnyepicurean

wow...look at those doughnuts....did you really wait that long? are they a specialty item there?

sorry to hear that the office reshuffle isn't going so well. best wishes with that!

Mia: I still can’t believe I did that. First and last time Q-ing for doughnuts. Unless it lets me score some major brownie points. Heh

B: doughnuts are a rarity in this country! Good ones anyway. Come open an American doughnut shop here and u’ll be rich! I kid u not.

cavalock...hmph. maybe you're onto something! :-)

woooow looking incredibly yummy!!!!
i want to try them :D

I wish they had Krispy Kreme here. :(