By now most of us are probably back at work after the holidays, same here folks. But I still feel like I'm on holiday season mode. Can't wait for the Chinese New Year break again.

Official word is they are gonna split us all into dedicated (smaller?) strike teams. Yup, it’s a reshuffle. There’s gonna be a big meeting this coming Monday to explain how all that’s gonna work out. Well, we’ll see. It’ll mean I’ll be moving out of my room and into cubiclepolis. Anyway, that’ll be later, at least a couple of more months.

So with my Warcraft Internet connection moving slower than a dead turtle, I spent my last few nites downloading (or is it uploading?) a bunch of CDs onto the nano. I managed to get thin clear plastic protectors for the back, wheel and screen for the nano on Monday at that Apple shop at Cineleisure, they were even nice enough to paste it for me.

Anyway, here's me playing with the 'Food' mode of my new camera. 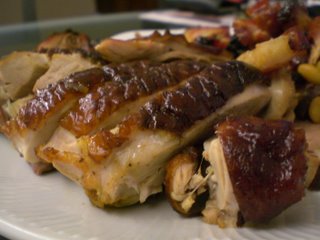 Duck from a famous duck rice stall from People's Park Complex in Chinatown. Yah, I always thought it sounds like some kinda commie HQ building or something. Bought it for dinner over the weekend. Looks like the Chinese New Year decorations are already coming up all over Chinatown. So what do you guys think of this 'Food' mode? Does the food look yummier? 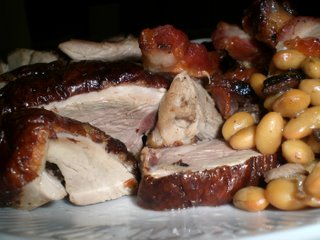 Happy Prosperous New Year!!!!
i thought i could find something yummy in ur blog.
looking really great!(^o^)/

The duck looks pretty good to me. Not sure how the "food mode" setting works but I am the wrong person to be asking, as I am very ignorant where cameras are concerned! I hope the "reshuffle" at work goes okay...as well as it can for you! Happy New Year.

Mine comes with porttrait, landscape, night, and sport.

Although, I guess you can always customize a setting and call it food.

yeah it sure does! and i llove duck!

Niki: Happy prosperous new year to you too!

Richard: As Q would say, “I kid you not, mon capitaine.” There really is a food mode. There r over 20 different modes here including the usual sports, night, sepia etc. The more interesting ones r food, pet, auction (I guess for close-ups of stuff u wanna put up on an ebay or something), text (for taking photos of books n documents, great to snapping recipes in bookstores) n whiteboard (classroom friendly?).

Queen: yah, the duck was great. Am pretty sure u have heard of the stall in People’s Park. ;)

Well, that is pretty cool (silly too). What make is it?