Cavalock and The Fellowship Singalong

I said this before, when I started this blog, it's gonna be bout stuff that I like, stuff that makes me happy and boy, did I enjoy myself on Tuesday night when I finally met up again with the guys. Cos of my mom and all, I haven't been meeting up with the guys for games and meals for a long time. Anyway, before dinner a few of us met up at Serene Center to check out the remains of Comics Mart, that's where most of us used to get our stuff. Man, the shop is really gone and the only thing separating us and boxes of comics and games was a cheap little combination lock. Was real tempted to add breaking and entering to my resume. <^;^> 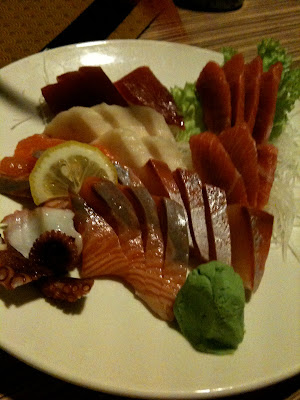 Anyway, we drove to Greenwood, was my first time there, quaint little place. It was a geek fest. Seven guys, six iPhones, three iPads, one private dining room. We rocked that little room with 80s cartoon tunes, memories of the gazillion games we played, the thousands of $$$ we spent on them, news on the latest pop culture, plus all the Japanese food we can eat. My friend can recite the entire Greedo speech, alien word for word, just before Han fires. And also the famous rock paper scissors lizard Spock scene from our favorite sitcom, Big Bang Theory.
scissors cuts paper
paper covers rock
rock crushes lizard
lizard poisons spock
spock smashes scissors
scissors decapitates lizard
lizard eats paper
paper disproves spock
spock vapourizes﻿ rock
rock crushes scissors
We found out that none of us really got Twilight, one of us subscribed to Paris Hilton's tweets and all of us are itching for a Nerf shootout real soon. Was really fun. After dinner, all seven of us piled into the wagon, still challenging each other on our iPads and iPhones. If there are any safety violation laws on driving and playing iPhone games at the same time, we definitely broke them. 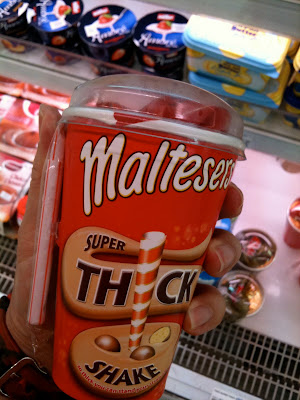 Time for another Meidi-Ya sighting. Here's something I saw during lunch. Looks so good but I didn't buy it. Super Thick Shake for all you milkshake lovers, I know there are a couple of milkshake shops around the island so I guess this might be a good alternative. 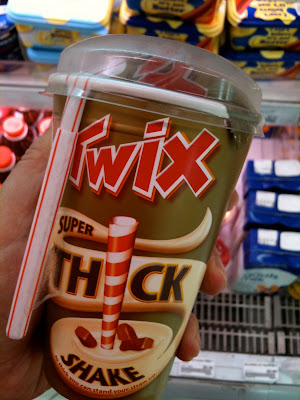 I guess all you gotta do is pour the choc pieces into the shake. Stir it up and it's done. 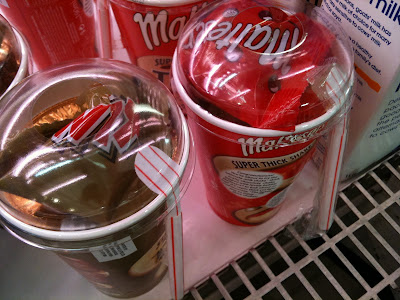 mcdonalds in london has mars milkshake lol. didnt try it cos i think i might get a nosebleed if i do!

You should have done that. Breaking into the shop I mean HAHA.

Boy... look at those milkshakes. Feel like slurping some...

Just had it today lol. It's awesome haha.

Costs the same as my udon lunch!

ice: saw yr post, wow, did one really roll into your bag?!

Yes one ball rolled into my bag & dirtied everything in there...

I saw Horlicks Mcflurry at the Bugis Mac's outlet. Only at selected outlets though.