Managed to get another comic book trade paperback from the Library on Saturday while shopping at Taka. Frank Miller’s Sin City Volume 7: Hell and Back. That’ll make it the 328th comic book I borrowed from the Library since like, I can’t remember, 5 years now? I mean, I know it’s the 328th cos I keep a list of all the comic books I get from the Library. A whole bunch of DC (Batman, Superman etc.) and Marvel (Spiderman, X-Men etc.) stuff. That’s like, thousands of $$$ I save by borrowing/reading them instead of buying them! Not to mention the space I’m saving at home.

Well, recently I noticed they brought in tons of humour comics like Garfield, Dilbert and Foxtrot. Nothing against them but it seems like while the comic shelves are filled with them now. There appears to be no new super hero comic for like months now. WTF is going on?!? Budget cuts?!? Censorship!?!

Plus for some strange reason or reasons, the Library has a habit of bringing in, for example, chapters 1, 2 and 4 of a series but not chapters 3 and 5. I have checked their online catalog and they just don’t have it. There are actually quite a few series that have this stupid missing chapters syndrome. How freakin' frustrating is that? 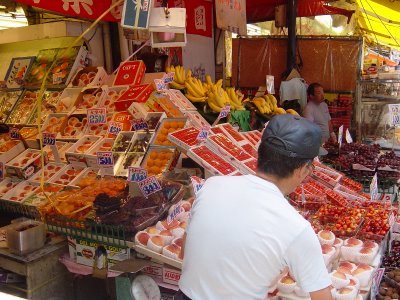 Time for another my Tokyo pix from last year's trip. Here's one that I really like at Ueno, it's a big street market area just outside the train station. Lots of fresh fruits and other food stuff. It was summer when I was there, a normal thin slice of watermelon costs about S$1.50!

Do library really has those comics?
i couldnt hardly find..

Yah they do. A whole shelf full of them. I only go to one at Taka and the central one at Bras Basah. The comic books at Taka is all the way to the right (as you enter) and also to your right at Bras Basah as well. You can always ask the librarian if you can't find them.

sure, will keep my eyes open next time i popped by the library. My fav section is the travel books which i used it to plan my trips