Cavalock and The Afternoon Delight Premise

Made our way to the newly opened unagi joint Uya at Wheelock Place. Freshly gutted eels for lunch! Uya was a good experience. Skin was just crisp enough and the meat tender and full of flavour. All right, it's way better than the unagi at Man Man at Bugis and just as good as Man Man at Keong Saik Road in Chinatown, if not better. I can't remember, been awhile since I been to the Chinatown one. Maybe cos unlike the one bugis, the eels here (and in Chinatown) are gutted on the spot and hence it's just fresher that way. I would definitely head back to Wheelock again.

Only minor problem I had with the place is how they had everyone seated the moment the doors opened at noon but only start serving bout half hour later. If I recall, Man Man already had them eels smoking on the grill before the doors opened and we got our meals pretty fast. I'm just guessing here. I could be wrong bout the reason for how long it took. 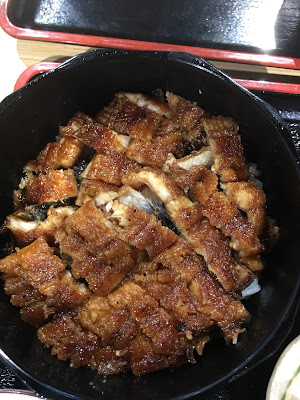 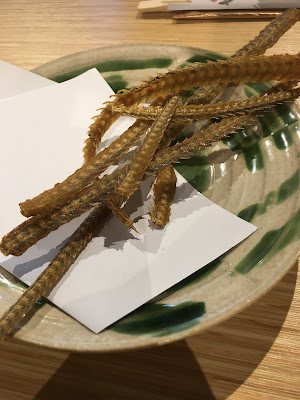 One fascinating thing bout staying in the Jalan Besar area is the opportunity to observe the shader side of life. It's not exactly a red-light district, it's more of an orangey tint. No legal brothels here but enough KTVs and massage parlours to make a guy's head spin at every street corner. Also, some of the private apartments here are homes to foreign KTV hostesses. Which brings us to this rather interesting observation. In the afternoons, you'll notice young dolled up foreign girls hopping into cars pulling up to them along Textile Centre Jalan Besar. They aren't streetwalkers cos they are specifically waiting for certain cars. I mean, I'm thinking they are probably mistresses or girlfriends of the drivers. Big cars, small cars, old uncles driving them, you see all kinds of local guys getting ready for some afternoon delight. And you know they be locals cos of the SAP school car stickers. Heh!

Anyway I ain't playing moral police here. Adults can do whatever they want and I don't think anyone's breaking any laws here. I just find it rather interesting to see this unfold daily... er... not that I'm there everyday but I'm pretty sure it's a daily thing. :) I guess it's part of living in this part of the island. In the evenings, the heavily made-up foreign KTV girls would be joining the dinner queues at the food stalls to pack their dinners before work. On weekends, local uncles would pair up with their foreign domestic worker girlfriends around the neighbourhood.

What can I say? It's just a fun place for people-watching!

Cavalock and The Blood Angels Chapter 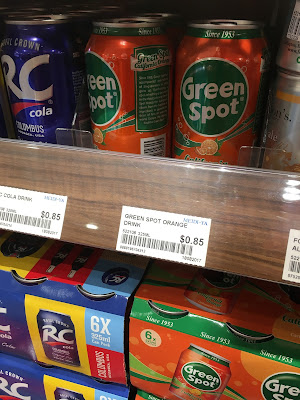 Here's an idea for a retro Chinese New Year gathering. Green Spot orange drinks at Meidi-Ya! Hah! Since it's the new year and it's orange juice, you know the drill. Who's old enough to remember this classic soft drink? This was my favourite when I was growing up in the old family home. They aren't fizzy like the other soft drinks.

Anyway it's the Lunar Year of the Dog and I figured I'll do post something red and auspicious instead. So I got my new miniatures hobby and I have yakked bout this here more than a couple times. I started painting my very red Blood Angels space marines chapter in December last year and so far, I have almost 20 of them done up rather nicely. Well, I'm kinda proud of how some of them turned out. First time painting space marines and faces too. Well, that's 500 points of Blood Angels in the box right there and I still got a ton more to paint. 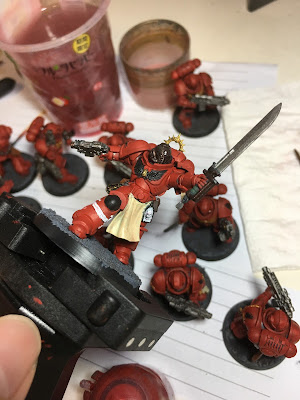 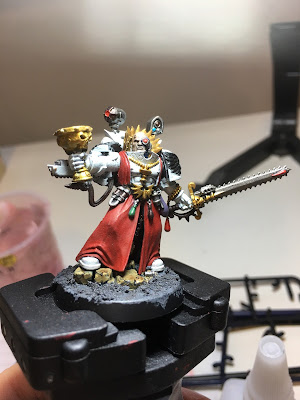 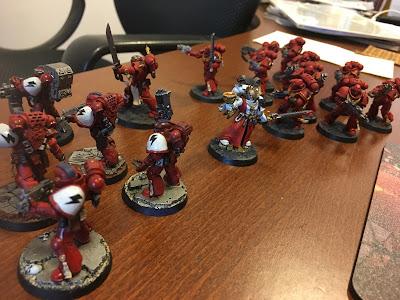 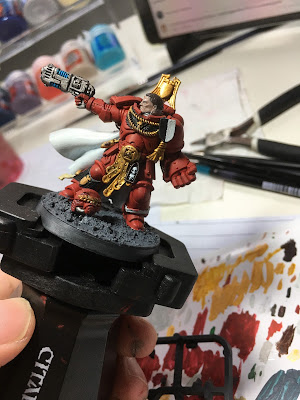 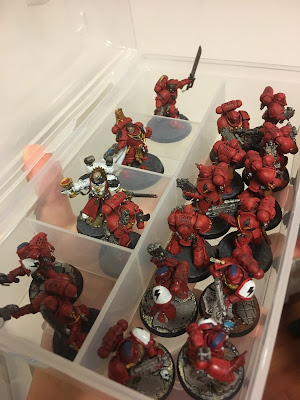 Cavalock and The Squid Ink Disclosure

We read the hype and followed it to Beach Road where Fatty Thai was. Been ages since we had some Thai wanton mee and were kinda looking forward to it. And also since it's a just ten-minute walk from our tiny apartment, why not? 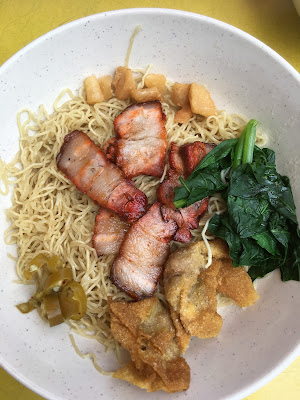 It was pretty decent lunch for S$4. The fried wantons I liked the most. The Baker-at-Home and I were in a rather ravenous mood that afternoon and unfortunately the wanton noodles weren't gonna satisfy us, so we tucked into some duck meat conveniently located at the same kopi tiam. Yah, there was quite a delicious duck rice stall there too and that helped turned a decent lunch experience into a much better one.

I swear the days have gotten shorter ever since we got Netflix (legally). We have been watching the heck outta it. And now they got the entire Star Trek TV shows library in there too! How is a guy supposed to eat, sleep and game now?!? Reading is now bedside reading, mornings are over at the gym, painting miniatures is whenever I'm free and I suppose I could watch Netflix or then again, that may not be a good idea cos I am after all, painting. I mean, you can't exactly take your eyes off your miniatures when you are painting them!

Now if you ever wondered where to get squid ink for making them squid ink pasta etc., you can get a pack from Meidi-Ya supermarket. The squid ink's from Spain and comes in little packs. One pack per serving I think? Another one them things you won't see at your neighbourhood NTUC FairPrice I guess. 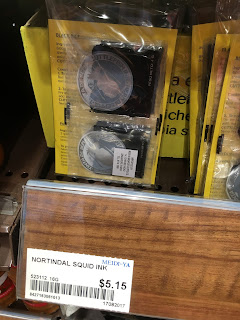 Cavalock and The Sourdough Fingerlings Provision

A friend returned from San Francisco with three huge sourdough loafs a couple weeks ago and we were the lucky recipients of one of them. Still unbelievably fresh after travelling halfway across the world. It's so good just to eat it plain. It's just so wonderfully sourdough-y, if you know what I mean. Hah! Was our breakfast for the next few days. 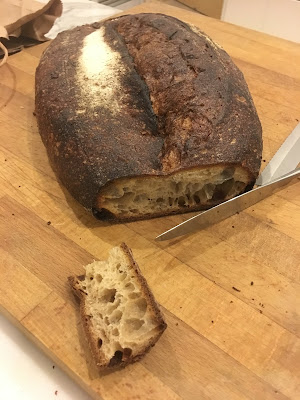 She also presented us with a bag of fingerings potatoes from the US west coast which we subsequently made into a delicious side with some beef steak for dinner one night. Always a joy to savour food that one can't find locally. 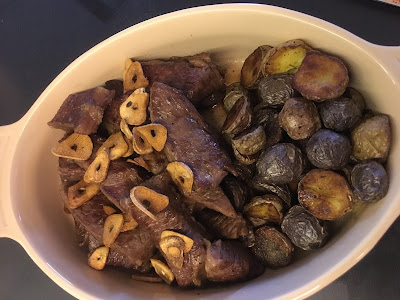 From all that's good to something that's quite the opposite. And that's having to eat an otherwise enjoyable bowl of Katong Laksa with a thin, flimsy plastic spoon. That just feels wrong. Scooping up a spoonful of hot Laksa using that ... that toy spoon seems awkward. If the spoon's too full and heavy, the weight of it kinda bends the plastic utensil into an uncomfortable angle. The famous Laksa still tastes the same but eating out of that plastic spoon makes this an experience I ain't planning to go through again anytime soon. 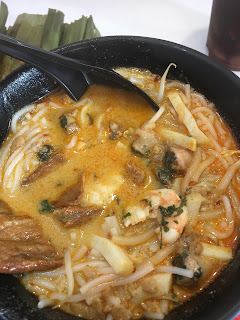