Cavalock and The Week of Crazy-Ass Indulgence

I must say that this has been a rather exceptional week in terms of gaming and dining. Notice how it's gaming first then dining, well, at least for last week. The gang's all hyped up over Magic: The Gathering card game again as we played our hearts out at the Theros pre-release and release weekends, as well as enjoying a host of other new card and boardgames. *Whew* 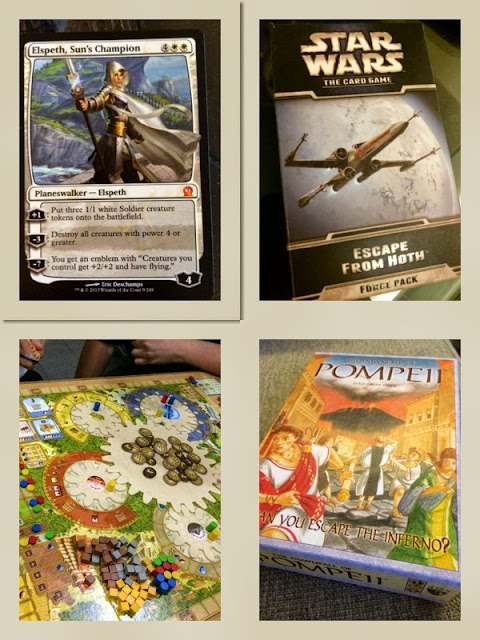 Playing games has been one of the few ways I de-stress after my caregiver duties and when I say "games", it's usually the analog types and not the digital or PC ones unless it's on the iPad which is a whole new other past time of mine. So anyway, this week saw a whole buncha games that I have been waiting for to launch or reach our little island.

From top clockwise, we got us the Planeswalker Elspeth, Sun's Champion, the mythic rare Magic: The Gathering card that won 2 out of 3 two-headed giant games at the Theros release weekend. It was a team event and my friend and I were down to 3 life points in our first game but we made the most awesome comeback ever to win the match with that card. Triggered her second ability to clear board and waited till we had a small army to mow down the opposition. Went home with 12 boosters and one promo foil for just S$42 entry fee.

The last pack of the Star Wars Hoth cycle cards arrived this week too. Nice game although I just don't have the time to play it and since most of the gang are back into Magic, this might be the last pack I'll be getting for awhile. I'll just stick to the cards I already have and still play with them.

Bottom left is one of the most popular boardgames right now, Tzolk'in: The Mayan Calendar. Great management resource and worker placement game with a very unique movable wheel system where your workers' resources changes every turn. A very intense game, lots of tactical decisions to make and you really got to plan before you decide where to place or collect your workers. Definitely not for boardgame newbies but oh, soooooo much fun!

Then there's The Downfall of Pompeii boardgame that I bought from a local online boardgame shop. Haven't played it yet at time of this writing but saw and read really cool stuff about it. The game is actually divided into two parts, first each player take turns populating the city, then when the volcano erupts later in the game, everyone tries to get as many of their own people out as possible. Winner is the guy who gets the most out. 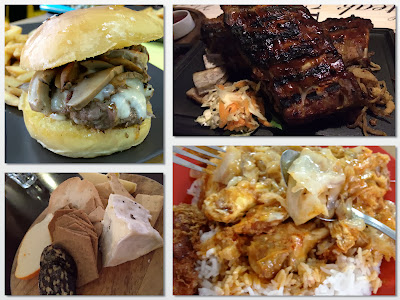 Well, like I said earlier, food took a little back seat to gaming last week. But I still managed to stuff my fat face with some new and old goodies. Checked out the mushroom burger from Meat Packing District along Waterloo Street for the first time and I kinda liked it. Wasn't too sloppy and everything tasted really fine.

And last Saturday nite started with ribs at The Chop House over at Vivo City. One word to describe the whole experience "CUMIN!" If you are a fan of that Eastern spice, hey, this is the place cos they apparently dumped a ton of it on everything! I would have been a victim of OD-ing by cumin if such a thing was possible. After that I really needed something to clear my ...er... palate or system cos I'm pretty sure I got cumin oozing outta my pores by then. So we drove to Dempsy Hill and it being F1 weekend last week, the place wasn't that crowded at all. Had a nice cheese platter with a bottle of excellent moscato wine at Jones the Grocer.

Finally at the bottom right pix is my usual cheap Friday nite dinner of "scissor curry rice" consisting of a chicken wing, fried egg and cabbage, at the popular stall along Jalan Besar, before I head off for my Friday night gaming session.

So how was your week?

Cavalock and The Call of The Challah

Immensely satisfying and extremely therapeutic, that's how I would describe my bread making experience. I honestly never thought I would derive such a sense of gratification from kneading and shaping a mountain of dough. 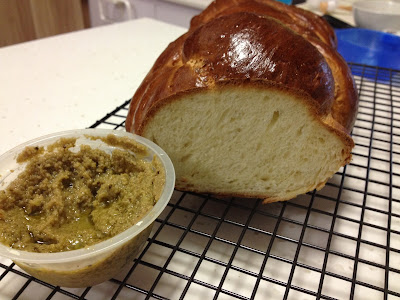 Of the three kinds of bread I learned to make earlier that week, I decided to attempt the challah on Sunday, the other two being baguette and soft butter rolls. Really a coincidence that it was Yom Kippur the day in case anyone was wondering. 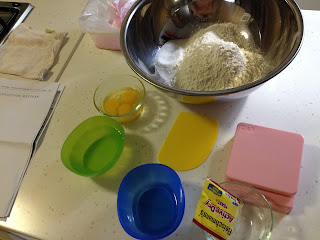 I always said how baking was more a science compared to cooking. It's perfectly OK to wing it while cooking but you gotta follow the recipe really close if you are baking. Well, that's not entirely true. Leaving the dough to ferment for one and a half hours like it says in the recipe isn't a good idea in our weather. And a good way to tell if something's baked is peering through the oven door instead of following the given time. Yah, you'll find yourself staring anxiously at the over door, not unlike the contestants on Great British Bake-Off (anyone else watching the latest season?). Grinning to yourself as your loaf slowly turns golden brown. 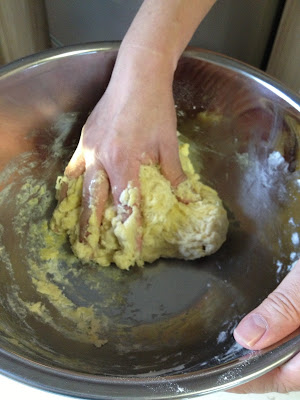 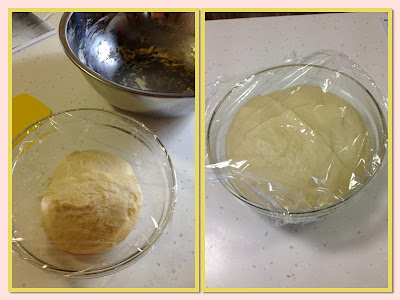 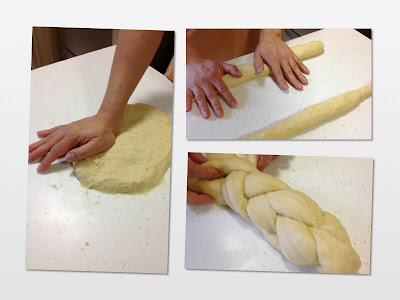 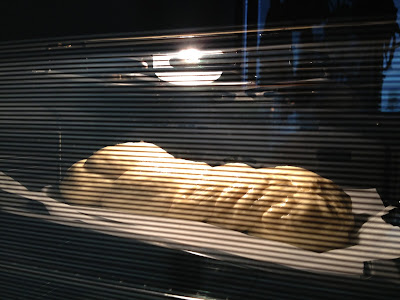 As you can see, the challah came out great and I'm already thinking of spicing things up the next time by adding stuff like poppy seeds. Er .... that is if I had any poppy seeds, not saying I do which of cos I don't since they are illegal! I HAVE NOOOO POPPY SEEDS!!! 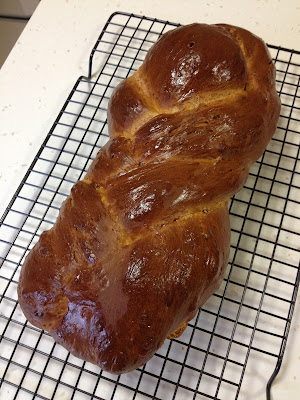 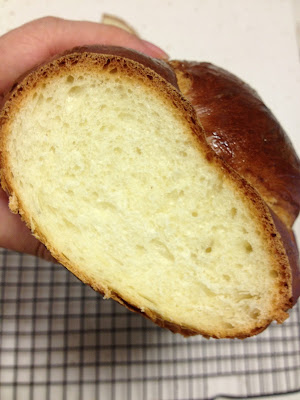 Now just when I thought there was nothing else to found in the old family home, I decided to raid a single kitchen cabinet and look what I found tucked in the back of it! Besides a lot of lizard crap, there's this whole stack of retro glassware! Don't worry, they were nicely wrapped in plastic bags and looks brand new except for maybe the candy stand. The cool colored plates came in pairs but I have no idea what country they are from. However the clear glass plates are marked "Made in France". Wonder what else I'll find next time. Oh, and don't forget these are still for sale!!! 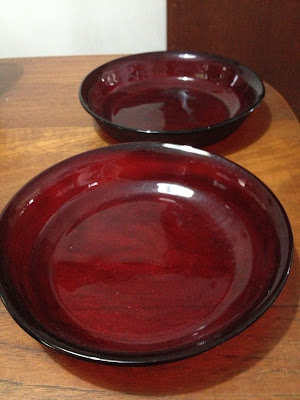 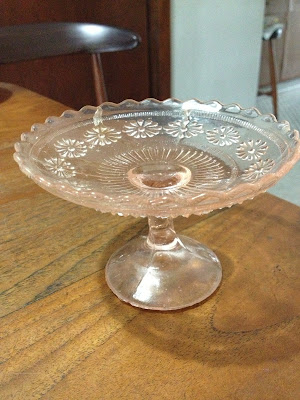 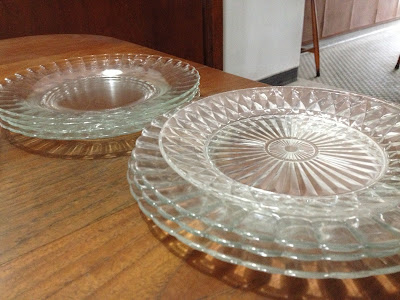 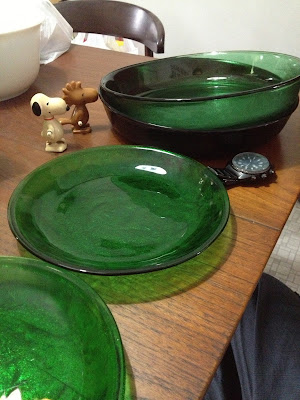 Cavalock and The Birthday Crustacean Cascade

Finally managed to enjoy me first dungeness crab and maine lobster dinner last Sunday (was me birthday!!!) at Cajun Kings. I had no idea where they were until we drove into this little enclave along Serangoon, not far from Nex shopping centre. It was pretty packed when we got there, fortunately we reserved a nice little table for four. Well, I liked how causal the whole dining experience was. No cutlery, all hands but you do get a bib before you start digging in. 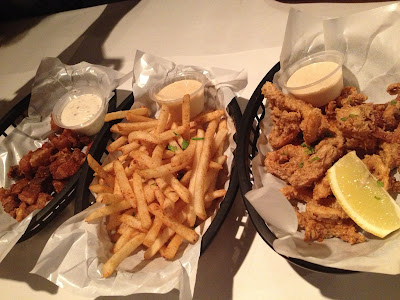 When the food arrived, we couldn't wait to pour the crab, lobster, corn and mussels out of their plastic bags and onto the long wooden table. It was a crustacean cascade! Something new and messy although I was told that's how it's done in some restaurants back in the US. We had our seafood in the king's mix and garlic butter sauces. Much preferred the fragrant garlic butter. The crab and lobster meat were fresh and it all tasted fine. Now I already knew it was cost us an arm and a leg for a pincer and claw so I wasn't all that surprised when the cost of what you see here was over S$200. Good food at not-so-low prices, I'll be back but maybe not so soon. 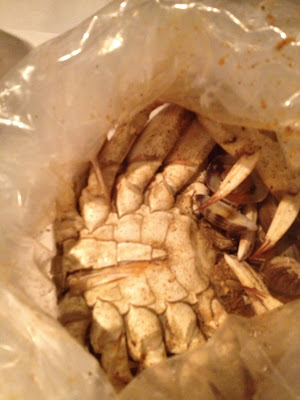 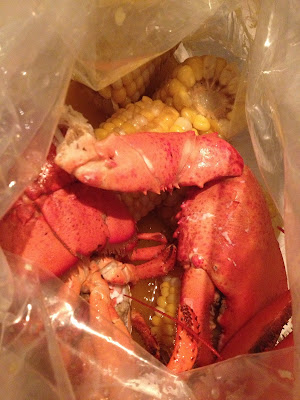 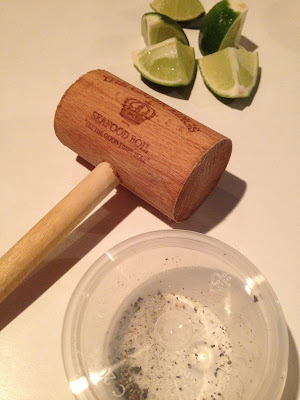 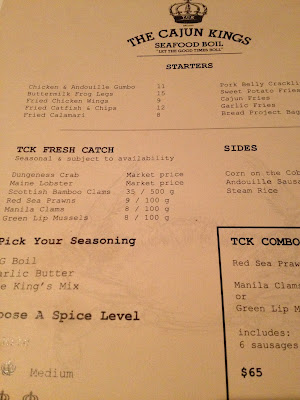 There has been quite a lot of talk in the media bout the poor in this country. While I do believe there are some here that definitely need daily financial aid to get by, it is also my belief that the majority of them aren't really poor but just lacking in simple common sense on how to save money.

I have seen teenagers who live in one-room apartments armed with the latest smartphones. Young adults who spend hundreds of dollars every Friday night at nightspots, then complain they don't have a cent in their bank account before the end of the month. Couples who spend tens of thousands of dollars on their wedding and overseas honeymoon, then wonder why they can't afford an apartment the next day. When I see or hear true stories like that, it's so sad it makes me wanna laugh. Really.

Back when I was a kid, there was a compulsory savings program in primary school and all of us little kids had to put money into our bank account each week. I don't know if there's still such a program but young people today really should learn how to save some money before it's too late. And seriously, please don't borrow or take a loan out on anything besides an apartment, if you cant afford it, chances are you don't need it.

Posted by Cavalock at 9:46 pm No comments:

Cavalock and The Lure of The Mandarin

I was actually kinda hoping to be proven wrong and enjoy a mind-blowing dining experience at our local Jamie's Italian that Thursday afternoon alas, the online reviews were right. It was a decent enough meal at an almost exorbitant price. I have no real complaints about the taste or quality of the food except maybe the posh fries or rather truffle fries were a little too soggy.  That there is the wild mushroom ravioli that I had and below that is the calamari. All that you see below for about S$80.

As I also expected, it was nothing like my experience at his Canary Wharf restaurant. That was more rowdy and filled with working adults instead of our family joint version. A different kinda vibe that I rather missed. A similar vibe would be at one of those places along Shenton Way that's always filled with loud expats drinking after office hours. On second thought, maybe I don't miss it after all. 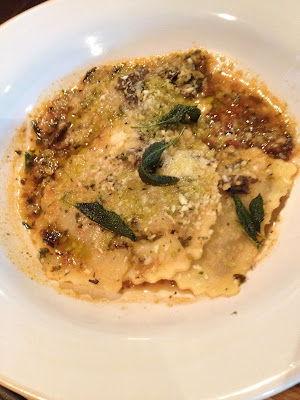 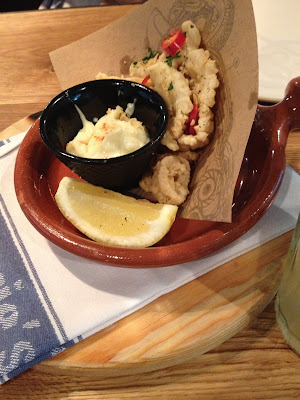 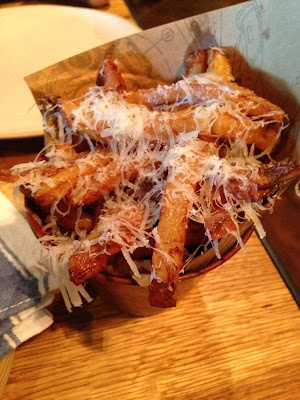 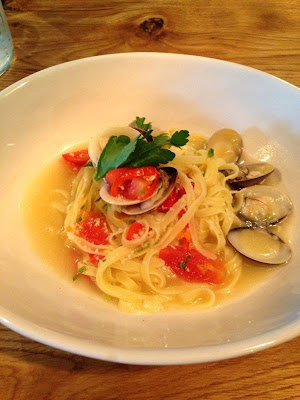 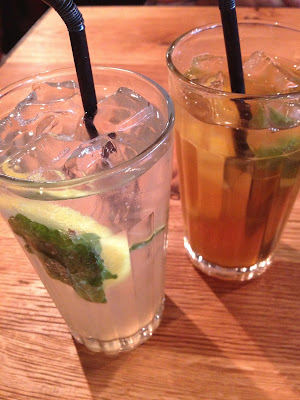 Well, another annual Singapore Toy Games & Comics Convention (STGCC) has just ended and as always, it was exhausting and fun. Like the last 3 pre-STGCC days over the years, we brought Marvel Comics' C.B. on another local food odyssey. You can check out his food blog here. 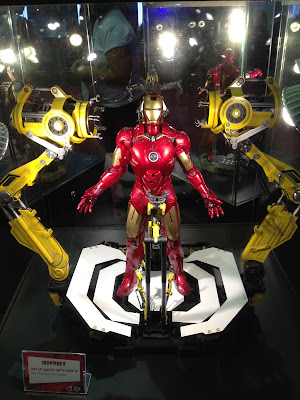 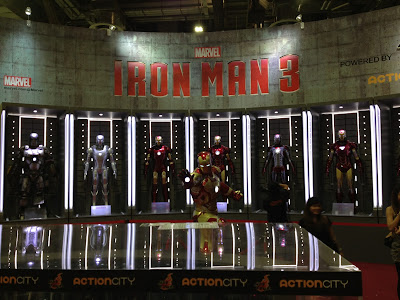 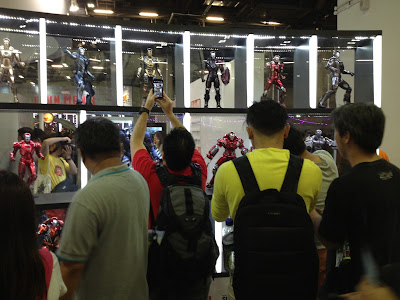 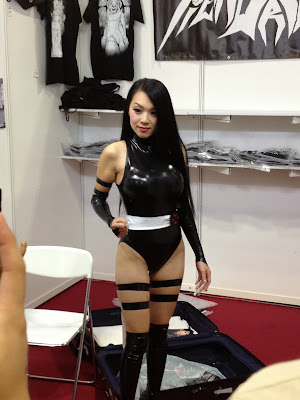 Yes, this year's STGCC was pretty much a Stark Industries affair as we see hundreds and hundreds of  Iron Man armor in all shapes (yes, shapes) and sizes. Look out for more STGCC pix at Here Be Geeks. Anyway, my best buy of STGCC weekend has got to be this comic pack starring Silver Centurion Iron Man and the Mandarin, the comic book version and not the movie one. Scored it on the first day and first hour of the convention, Great deal for only S$20 as they usually go for almost double that elsewhere and I only wanted the Mandarin figure. Fellow Marvel collectors will understand how difficult it is to find him in one of his classic costumes and at such a low price too. 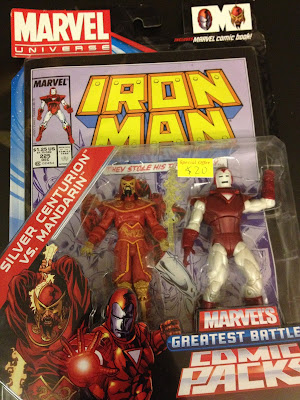 Posted by Cavalock at 9:17 pm No comments: