Cavalock and The Ulcer Patch Peculiarity

Our second visit to Folklore was just as entertaining and memorable as our first a couple months back. This time, it was an extremely boisterous group of nine adults and kids instead of just me and the Baker-At-Home. Still a wonderful dinner experience except for a couple minor hiccups. No beef rendang that night! They also appeared to be terribly understaffed that night so we mostly refilled our own water when we wanted to. We didn't wanna bother the already harassed staff of two. I guess this is all part of the so-called manpower crunch the F & B industry is facing. 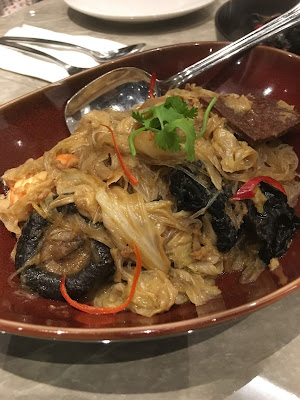 Still a satisfying dinner. Everyone had their favourite dish like the tender oxtail stew or and mine was the unexpected buah keluak fried rice. Yah, never thought I would like a rice dish that much. The chap chye would had been more well liked if they gave us less noodles and more cabbage. Hah! 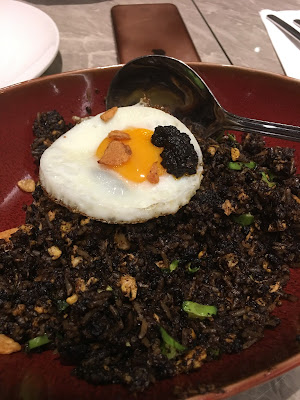 Here's something to add to the list of handy Japanese products I wish we have here. Bought them in Japan earlier this year when I bit me lip during lunch (or was it breakfast?). These little medicinal miracles are for those pesky mouth ulcers whenever you bite yourself. Peel and stick the small circular patch over the ulcer and it works. No sticky jel or taste and it's easy to store too. So why won't they import this here? Maybe our local authorities have deemed that there's some deadly or at least dangerous chemicals present in them patches? I mean, kinda like how they banned them Taiwanese milk teas, only thing is I bet Singaporeans would consume truckloads of them when they are in Taiwan. Whenever we travel, we would be drinking and eating same as the locals and I just find it weird to hear our Government banning them. Ok, enough rant. 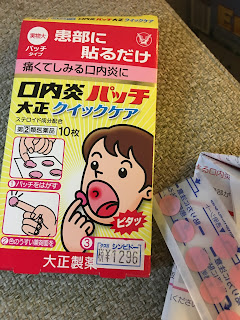 Cavalock and The Kombucha Experiment

My first taste of the fermented tea drink Kombucha was at a Real Food outlet couple months back. It's like drinking cider vinegar as the one from Real Food comes with a fruity flavour. It's sweet with a sour kick. The Baker-at-Home and I liked it so much we began toying with the idea of making our own. The health claims are out there and whether you are a believer or not, I think the pros outweigh the cons here. 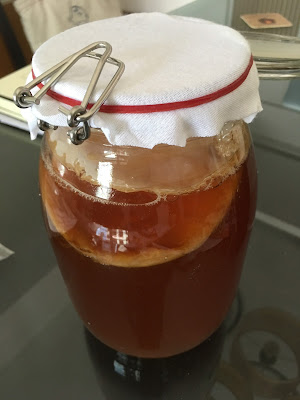 And by some incredible coincidence, one of her friends has actually been brewing her own kombucha  for awhile now and has a slice of scoby (symbiotic culture of bacteria and yeast) starter to pass to us! You'll need the scoby to start your own jar of kombucha. So we did, brewing ours in the above jar and that photo is actually our second batch, having enjoyed the first one. Yup, drank and we still alive here! 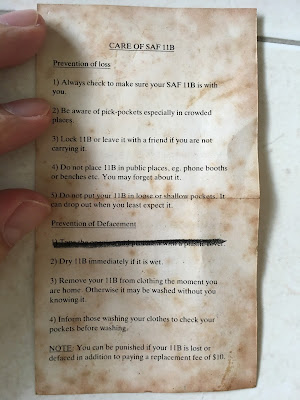 Been clearing up cupboard space in our tiny apartment cos of numerous incoming boardgames, cookbooks and Lego sets, and saw this little note. Believe it or not, I actually kinda enjoyed my NS days. I always tell folks that's the first place I learnt how to lie with a straight face. A skill that came in real handy more times than I can remember. 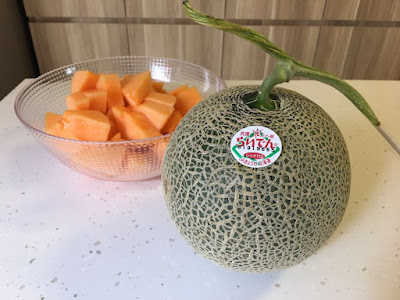 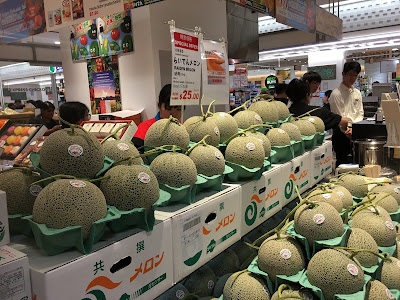 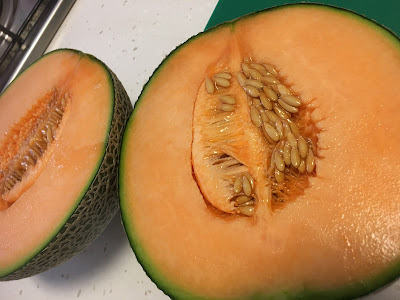 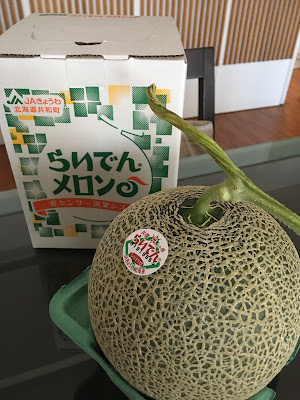 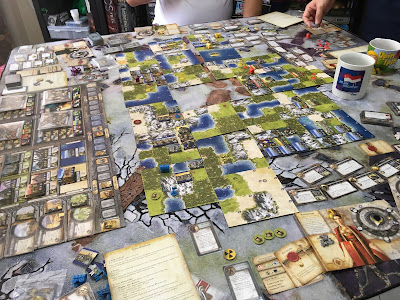 Good news bout the Media-Ya supermarket renovation is that it's finally done and it looks all nice and spiffy. Bad news is their selection appears (to me at least) a little more mainstream. I see less Japanese and foreign merchandise like beer, snacks and cereal. Maybe it'll be different in the coming weeks? Anyway the Baker-At-Home did notice that they have brought in more Japanese baking ingredients and stuff, with the below small section devoted to them. 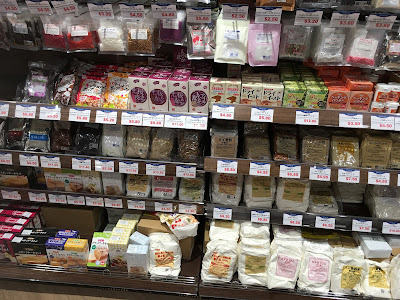 Check out the new lighting above the kid's TV section. Pretty neat. Now even though the selection now appears a little more like what you would find in NTUC FairPrice or Cold Storage, there are still more than enough unique Japanese products to make me wanna drop every couple weeks. Fingers crossed! 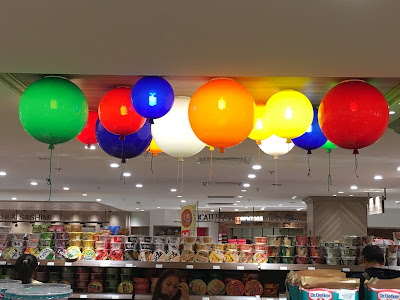 So my 83-year-old Dad heard bout this lone red erget roaming the fields around Chinese Garden last month. He finally found the time to head down there one morning, almost couldn't find the bird until a drink vendor told him where it was last spotted. Real friendly little bird that wasn't shy at all bout walking right up for its closeups. 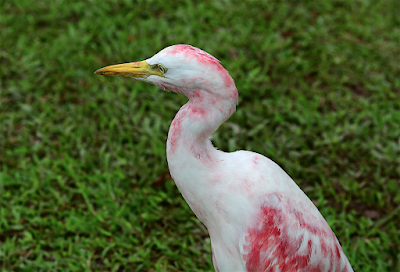 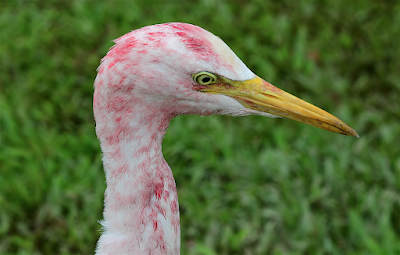 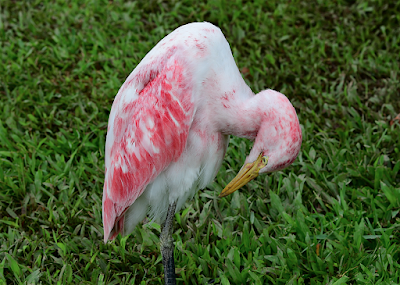 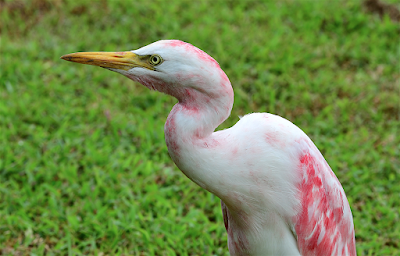 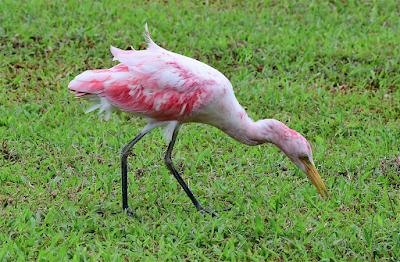