Cavalock and The Famers' Market Foray

A Farmers' Market in the middle of Rockefeller Center in New York City! As early as 8am, they were already setting up All right, I know the photos could've been a lot better with close-ups and all but I was absolutely enthralled by the fruits, veggies and home-baked goods. My only regret is after buying all them board games from Gen Con, I had no luggage space left for any of the fresh fruits and I don't trust myself or anyone else with hand carrying anything as fragile as a peach. 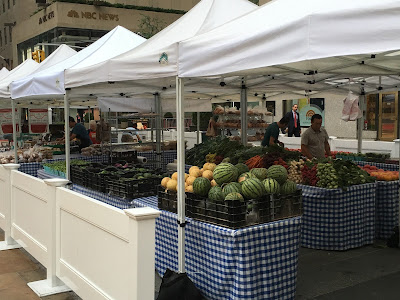 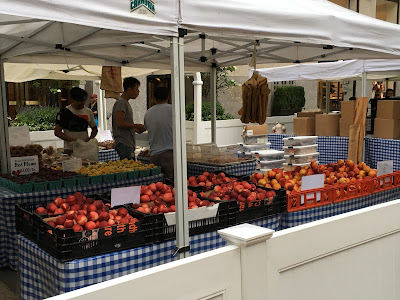 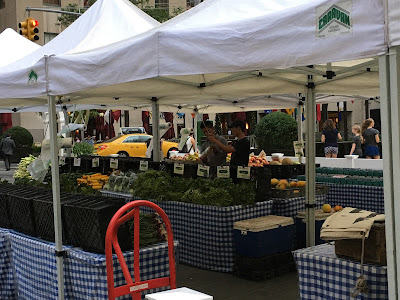 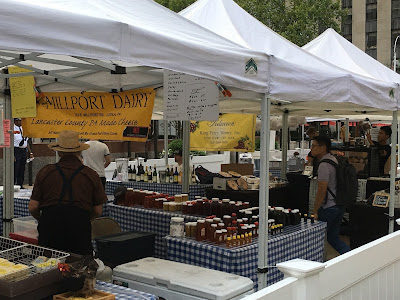 Well, I did managed to grab a small can of homemade maple syrup from the farmer's market for the baker-at-home. We haven't had a chance to try it yet so we'll see. 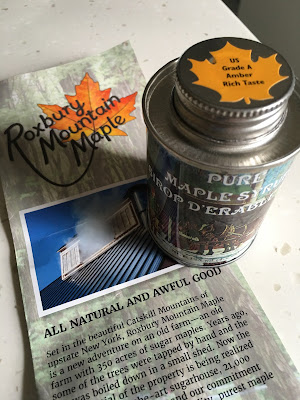 So yah, my hotel was just across the road from Rockefeller Center. Great location with an equally impressive view right in the heart of it all. Came with a nice little balcony too but it might be ...er ... kinda pretentious to be out there. The photos below might appear claustrophobic, with the buildings so close to each other but it doesn't. In fact there's this closed vibrancy or vibe that just makes the city come alive, know what I'm saying? 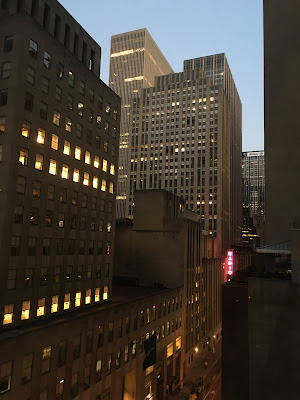 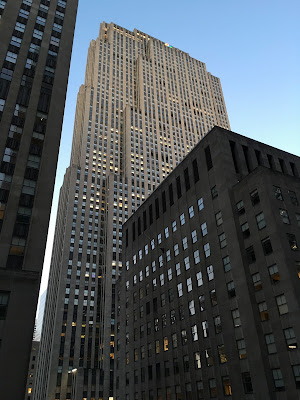 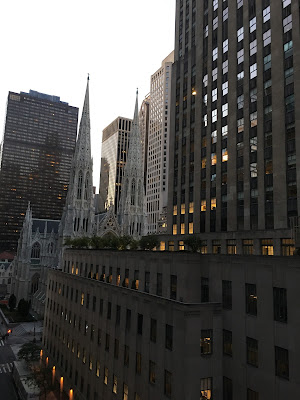 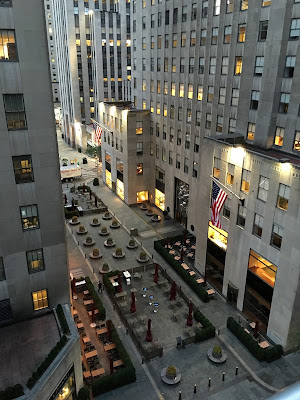 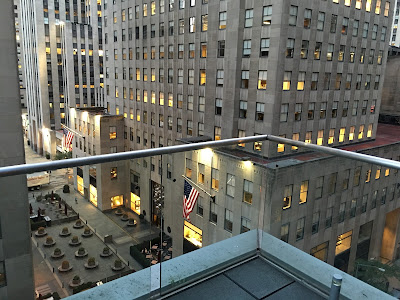 Heh, a couple of other things I like about my room. In bed with a special visitor and they got a water cooler with empty bottles outside the room just for guests. 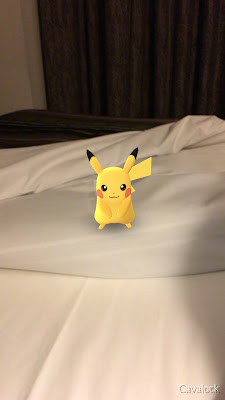 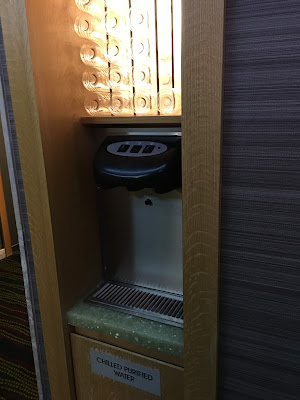 Posted by Cavalock at 9:00 am No comments:

Cavalock and The New York State of Mind

There I was, sitting by the fountain by myself in the park, enjoying a Nathan's hotdog, just opposite the Apple store in Fifth Avenue when an extended family of Indian tourists descended upon me and unceremoniously evicted me from my spot. About a dozen of them just swarmed around me, as if I was invisible, absolutely no regard for personal space while I was having my lunch and started posing, snapping pix right in my face. Hey, this is New York, I could be some crazy homeless dude packing some heat! Believe it or not, that was the only (man-made) negative experience I had during my entire two-week long U.S. trip. There was a major technical Delta flight glitch that affected thousands of travellers but that's a story for another day. But seriously, with hordes of unruly China and Indian tourists overrunning landmarks across the globe, I just don't know what to say. Well, I actually do but I shouldn't say such things online. 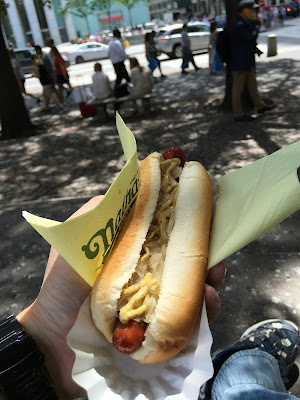 Anyway, this solo trip to New York was invigorating on so many levels. It is simply amazing when you get to just chill by yourself, no plans at all, relax and do whatever you feel like in the middle of New York. So naturally I made my way from Fifth Avenue to Times Square to finally visit that famous New York geek tourist attraction called Midtown Comics. Heard and read about the place for the longest time, glad I finally got to visit this incredible comic book shop. Urgh! The day I was leaving NYC, Batman writer Scott Snyder was supposed to visit the store that evening for an autograph session. 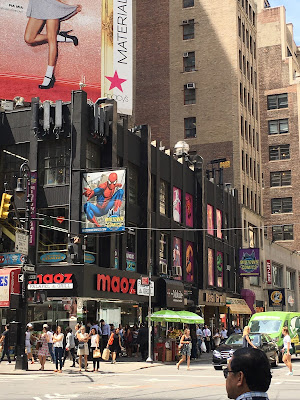 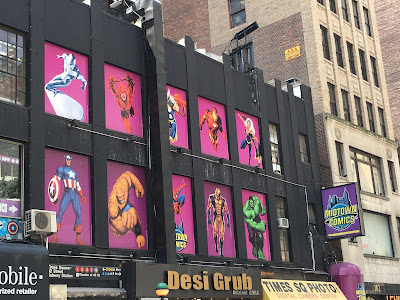 On my walk back to my hotel, I sneaked into Lady M Cake Boutique along 40th Street for an afternoon break. Is it just me or does it look a lot greener than the one we have back home? Not bad but was a little too chewy, was kinda expecting it to be softer. What was interesting was me seated between a Russian couple on my left and a Japanese couple on my right. Not tourists but judging from their conversations and opened laptop, I'm guessing they live and work in the Big Apple. 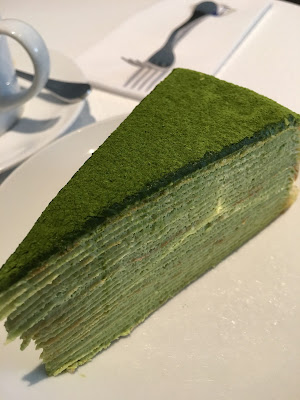 Posted by Cavalock at 4:00 pm No comments:

If there's ever a go-to meal in New York for me, it's got to be this, Shake Shack at JFK Terminal 4. I don't bother looking for it in the city anymore. Met my friend at the airport as we waited for our connecting flight to Indianapolis, we made a natural beeline to the Shake Shack there and I guess we were so hungry that we forgot what a Shroom Burger was. Yes, it's a mushroom burger but it's also a MUSHROOM burger. A huge crisp-fried cheesy portobello mushroom instead of any beef patty. We forgot what it was but it still tasted absolutely great especially after flying halfway across the world. 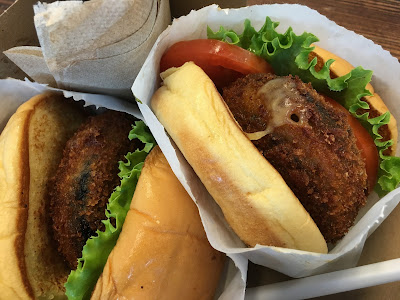 And on my way back home, a delicious SmokeShack to end my 2-week gaming odyssey in the US. Now part of me would like to have them open an outlet here but if they do, that's like one less thing to look forward to if I'm ever back there. 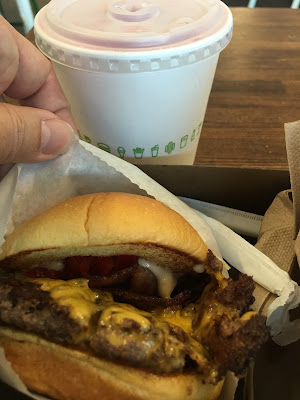 Well, if anyone's interested, you can read a little about my Gen Con experience over at HereBeGeeks website. In the meantime, here's my haul of new board games from Indianapolis. Now, I'm not even showing the ton of gaming accessories and expansions to existing games that I bought. So why would I buy them there and carry them all the way back home? Cos the shops here in Singapore would often jerk up the price ridiculously high, like a USD20 game would cost around SGD50. 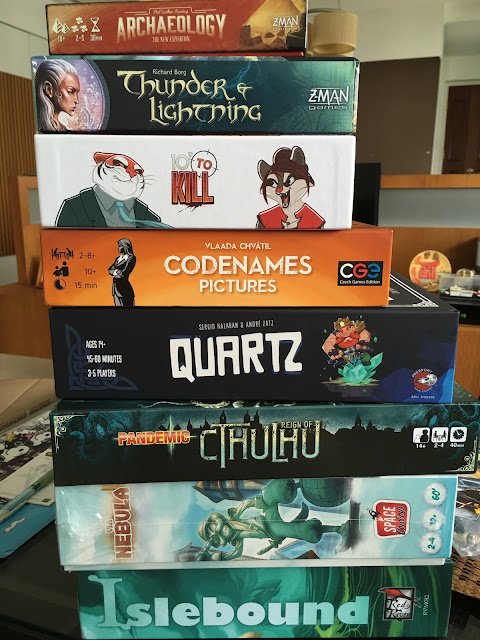 Hey, I'm back after two weeks in Indianapolis and New York, not that anyone misses me I'm sure. Just like two years ago in August, I was attending Gen Con 2016 in Indianapolis, the biggest boardgame convention in the free world. If you read some of my older posts, you'll know that I'm a huge analog gamer. I have over 50 boardgames and a gazillion cards and miniatures games in my tiny apartment. Gen Con was a blast and I had so much fun, playing and buying the latest boardgames.

I must admit I was kinda apprehensive bout traveling to the U.S. after reading and watching Trump's rise to power. For awhile, I told myself this is not unlike Jesse Owens going to compete in Nazi Germany during the Berlin Olympics. Hey, Indy's Governor is Trump's running mate right? So you never can tell how the locals are going to react to four Asian guys suddenly showing up in their midst.

Fortunately there were no ugly or racist encounters and almost everyone I met was extremely generous and friendly. Alright, more on those games in a future post. And now I ask the question I always ask when I'm back from an overseas trip. Why can't we have this dish/meal here?!? Delicious pulled pork sandwiches. Had it the last time I was in Indy and I was really looking forward to this. It's just pulled pork meat in a naked bun. Nothing fancy, no weird dressings or toppings, just a simple pork sandwich. That glorious tender meat in a soft bun, why can't we have it here? I know preparing the meat takes time plus you need a proper BBQ smoker and all that but come on, other more "complicated" food joints with crazier, bigger kitchenware have opened up here. 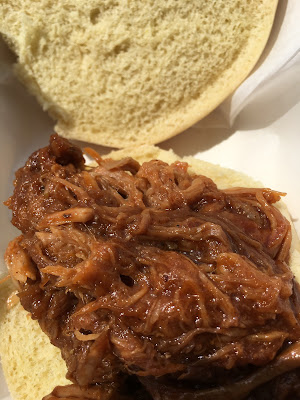 Now since everyone's talking about it and playing the game, I thought I'll just share my experience on playing Pokemon Go overseas. My friend helped install the app in my iPhone while we were in the U.S. a few days before it was (finally) available in Singapore, so I had a tiny head start in catching a handful of Pokemon. Wow, J.W. Marriott is Drowzee central. Caught almost a hundred of them while staying there. I also managed to bag the exclusive North America Pokemon, Tauros right in my hotel room. 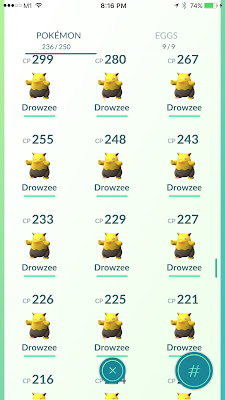 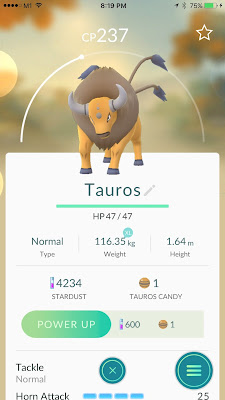 Then I was alone in New York where I trekked across midtown. That's the layout of Central Park down there. Best experience was the ride back to JFK Airport. Afternoon traffic was bad and that meant slowing down at every intersection, giving me time to catch half a dozen Pokemons in the back of of ride as well as winning one gym fight! Total different Pokemons caught in the U.S. = 75, levelled up to 15 before coming home. 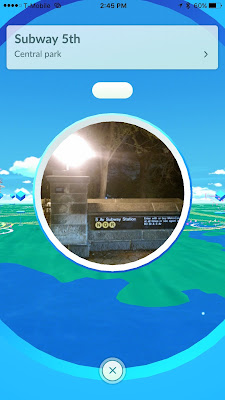 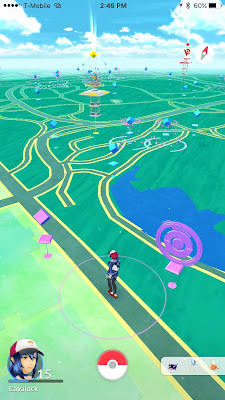 Posted by Cavalock at 9:00 am No comments: