Cavalock and The Thanksgiving Effect

I know Thanksgiving would probably be over by now but I was looking back and I thought there are a bunch of stuff or events that I wrote about that right now, I should be thankful for.
Now I said before that I only write bout stuff that makes me happy, the not-so-happy stuff I don't really feel like writing them down. So, in no particular order, since I started this whole blog thing back in '06, here are just 10 of the things that I blogged about and that I'll really thankful for (there are of course more but I'll just keep it to 10).
1. Picked up my itouch, best handheld device ever. And that's a lot coming for a guy who owned two Palms before.
2. My trusty Macbook. An impulse buy that saved my ass during my course.
3. A kickass working trip to Tokyo. Great weather, good food and lots of fun even though it was work. Got my favourite watch there too and saw some noodles in a hot dog bun at the same time.
4. Gen Con Oz in '08. Just four guys on a 'road trip' to Brisbane, to a 4-day gaming convention. It just doesn't get any better than that. Oh wait it did, we kicked some Aussie ass and won a couple of championships.
5. Super cool trip to the U.K. this year with super cool people.
6. Discovered the joys of cooking and baking, thanks to every food blogger out there (you know who you are). <^;^>
7. Grateful for being part of the OTACOOL book.
8. Taking a big leap outta my comfort zone. Had no idea where I'll land and then ending up here six months later.
9. Passing the course that I took after quitting my job. OK, I didn't really blogged much bout that but it was a very grueling course with tons of coursework but met some really fantastic people while on the course.
10. Am especially thankful for everyone who's reading this, thank you for dropping by!
Hang on, still a short post and a couple of pix here. First time lighting a scented candle here in the living room. It's a big one from Crabtree And Evelyn and it ain't cheap either. 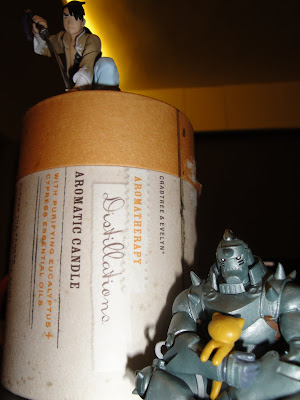 Nice scent of eucalyptus. The three gashapon figures you see are the only things I got from the Anime Festival Asia last weekend, only $4 each, from my current favourite anime series Fullmetal Alchemist: Brotherhood. See, I am able to control my spending. Hah! 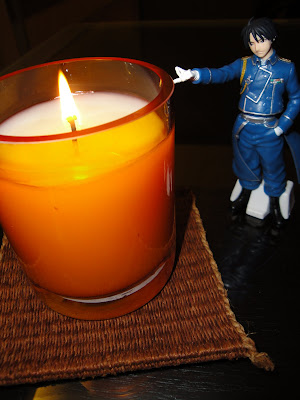 Such an inspiring post. I ought to give thanks too.

aye to all that's good in your life!

do a (small) christmas turkey and u can have it as a roast, in a sandwich, in a salad and ummm...many other ways. so fun. the downside- u might get really sick of turkey after christmas...

Ladies and gentlemen of the jury, as to why I'm staying away from turkeys for now, i draw yr attention to exhibit A...

I remembered that... that was why I asked lol.