Aww man, it's Tuesday nite and I'm writing my blog which means only one thing.....yup, I'm playing World of Warcraft now, just like almost every other guy I know (tuesday nites are when the server goes down). Arghhh....A lot of crap happened at work but since you never can tell who's reading this, plus the fact that I'm in the media and advertising industry, so it's better that I just leave work out of this place.

Anyway, on to happier things, tried again last Sunday to bake more Chou cream puffs and made a lot more this time. Brought some to the office, everyone liked it! Chou Two works! Between the custard making and dough baking, managed to zip down to Sim Lim with my friend in his car, upgraded this here PC to 1G freakin' RAM and bought WOW all at once! After a week of slow motion trial account action, my Undead Priest is now running like the wind! 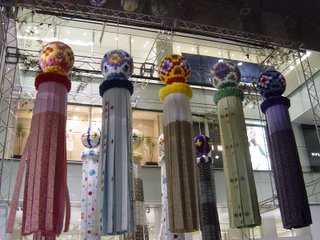 That's Takashimaya in Shinjuku Tokyo. The entrance, I believe. Pretty cool. Took the pix at nite as I was leaving the place.