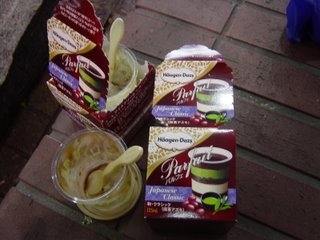 What I can see, you fancy alot about Japanese products..

Wonder if you like the girls in kimono too?

hiya, tks for dropping a note... & reading your blog sure took my mind off the disaster.

oh btw, there are three wonderful stuff i've discovered here: you write darn well, you are a foodie and *smile*!

Thanks everyone for dropping by! Just been super busy at work...