If you guys seen me first few entries, you would know of me love-hate relationship with baking. So here's the latest attempt this morning! Woke up at 7am and decided to make meself some French Toast after coming across this simple little receipe over at Baking Sheet. It's kinda different from other French Toast receipe cos it consists of smaller pieces of bread instead of an entire slice. 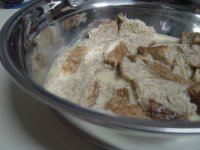 Turned out pretty good but not as sweet as I expected, so I added more maple syrup while eating. Am afraid the pix didn't turn out as sharp as I hoped. 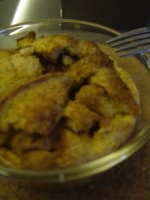 Anyway, went for drinks last Friday at this roof top joint called The Loft. No, it didn't turn out like that other Friday! Mainly cos there were no one-for-one drinks or happy hour! I only had an Irish whiskey and two beers. Most of us were there for the first time. It's kinda strange cos it's like an open-air, roof top bar but the roof is only on the 3rd floor! So it's like surrounded by all the other much taller buildings around it. Needless to say, after an hour it became pretty hot and humid. Plus the patrons there kinda gave some of us the impression that it's more like a pick-up joint for expats, instead of a friendly chill-out place. There's another open-air, roof top place called The Balcony in town. I haven't been there but some of us figured that it's gonna be just as warm cos the place is also like only a couple of floors above ground.

Oh yah, Camper at Takashimaya has finally brought in some new shoes and sandals. Woo hoo!
Posted by Cavalock at 11:42 pm

Martin 'Yan can cook', I bet he sure delighted get those free recipes from you.

May i try some?

You sure beat me to the kitchen on a Sunday morning...

But i can say you're sure a multi-talented single guy...

Well, the shoes n sandals came at the right time with Progress Package in the pocket:-wink..

Am afraid I can’t cook to save my life. Still exploring with amateur baking which has somehow captured me interest more than cooking. Go figure! Hah!