Been waaaaay too busy last week to write anything cos of work. Yah, half the office went on long weekend leave two weeks ago and the other half last long weekend. Me? I’m saving them for later. So there I was, thinking bout all them long hours and fantasizing bout the perfect job. Thing is, I have already been in the perfect dream job many years ago. I figured maybe writing bout it now would kinda me feel better …or not. It's not like I'm trying escape back into my past but sometimes you just wanna think about the good times, know what I mean?

Now, I can’t really say what exactly I was doing (don't ask, another long story) but it was the coolest thing ever. Not even my folks knew exactly what I did, only my closest friends knew. One even said it was a “honeymoon job”. I’m pretty sure whoever is reading would probably have a hard time believing it but …hell, it was all real for me and it really happened, at least for a year.

There were about 20 of us led by six Americans. Really cool and fun guys. The only reason they shut down our department was cos of some bureaucratic big wig upstairs @$$hole pulled the plug on our funding! What we were doing was freakin’ years ahead of its time! It’s damn true cos today, there’s a very, very famous organization doing pretty much exactly what we were doing. After that one super year, I went back into the media industry. But not before a little solo trip to Hong Kong but that's another story for another day.

Anyway, we worked hard and we played just as hard …we celebrated Halloween with a party (I came as Dilbert, easiest costume with the just a flipped up tie!) and had a Fourth of July BBQ too. Well, as for work. I guess you could say there were days when we got shot at and there were also days when we shot back. And I suppose there were those days when a couple of things blew up.

At least one good thing did come out of it. One of the Americans (the only guy I knew who ever worked with the CIA) met and married one of our local colleagues. Heh. Everything happens for a reason I guess!

Okay, back to today. Mother's Day was yesterday and it kinda reminded me of what me and my best bud used to do on that day when we were teenagers. Most Sundays we would hang out at Orchard Road and on Mother's Day we would always check out the daughters that were out with their mothers. Why? Cos we were always figuring out and asking ourselves "Hmmmm. cute babe but I wonder if that's how she'll look like when she's older." Bwahaha! Give us a break! We were just kids then! 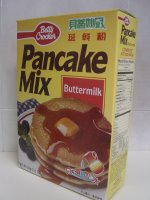 Oh yeah, decided to rustle up some pancakes over the weekend too cos of the leftover maple syrup. Thought of getting the frozen ones but decided to try 'making' them instead, for the first time actually. Turned out pretty good. Will try to get some sausages to go with it the next time.

haha i'd like to see a pic of u in your dilbert get up...must have been a hoot!

I hope you are using geniune maple syrup - not some counterfeit kind :-)

Queen: yah, its real easy. Just a shirt, glasses and a flipped up tie. Just slide a wire into the tie and bend it!

Richard: er…it was the cheapest one on the rack and it comes in one of those squeeze bottle so I guess it’s not exactly the real deal. Haha. Anyway the others r like $4 or $5 more expensive and they come in glass bottles. I suppose those are the better ones.

Kee me wondering, what kinda job were u holding before...

Although I'm wif them but I too sometimes checked out girls who goes out with their moms...hehe

This weekend I'm gonna try out Oreo cheesecake made from scratch..haha

The maple syrup I buy comes in metal cans (the glass bottles command a premium).

Is the maple syrup from Canada? I sometimes wonder if other countries produce the stuff too (ok, I know the northern United States do).