Cavalock and The Lockdown Role-Playing Escapade

Like I said in an earlier post, this is a pretty good time to be a gaming geek. While the nasty jocks are caught in a helpless fetal position, trapped in the knowledge that their precious bars and sporting events are either closed or cancelled, us geeks are still gaming like there's no tomorrow. So the media has recently been going on bout how gamers are entertaining themselves online and there was an article in the local papers that mentioned more folks than ever playing role-playing games like Dungeons and Dragons online.

There's a site called Roll20 that lets you meet up with your friends and together with the characters you all created on another site D&D Beyond. At the moment I am in two Dungeons and Dragons role-playing campaigns where we meet up online (we talk via Discord) on those two sites and spend around three to four hours per session. I'm not running the campaigns as in I'm not the Dungeon Master, I'm one of the players going through the adventures and it's really fun. I have been into Dungeons and Dragons since I was a teenager but never really played the game until years later as a working adult. On my shelves are so many Dungeons and Dragons as well as other role-playing books, magazines, gaming aids that I have bought and collected over the years.

Right now I'm putting together a horror campaign based on another game system. First time running one. It's a narrative system so it's more immersive storytelling than fighting creatures and I'll be running it, most likely after Lockdown as I prefer running a narrative game in real life than online.

Over a month since the Lockdown started and the Baker-at-Home is still cooking up a storm. And that means it's time for another home-cooked college! Oh, plus it's our wedding anniversary today! 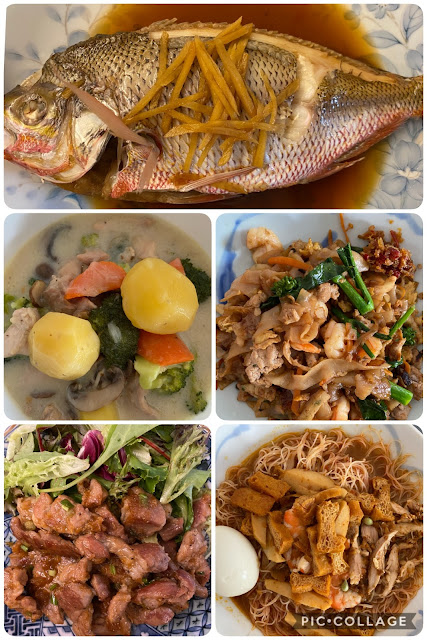 That kway teow! Or is it phad thai? Looks great.

Happy Anniversary you both. So did you take a turn in the kitchen instead? Heh.

Thanks! That's kway teow. Nah, I just help with the clean up after the meals. :)

Hahaha. Cleaning up is much helpful!