Cavalock and The Gen Con Reminiscence

Gen Con 50 ended over the weekend and as it was the boardgaming convention's 50th anniversary, you can bet it was the biggest gathering ever. I was at last year's event and one of the reasons' I'm not there this year is, to be honest, cos of Trump. When it was time to buy the tickets and book the hotel early this year, Trump was making travel to the US a freakin' nightmare for visitors. I took it as a sign that maybe I shouldn't be heading there this year. Non-whites getting attacked were becoming the norm. Today as I'm watching and reading the news, it's the damn Nazis that are more or less given free rein in the US. As a kid back in the old family home, I grew up on a regular diet of WWII literature, history and media, I grew up hating Nazis more than the bully in school. So you can imagine how I feel about the current situation. Part of me is glad that I'm not in that country now but of cos, there's a part that is somewhat crestfallen that I'm not there at the largest boardgame convention of all time.

I had so much fun at Gen Con last year and in 2014, playing all kinds of boardgames, heading to New York after the convention and then wandering around the Big Apple on my own, don't know if I'll ever do all that again. Well, since I'm reminiscing bout my last US trip, maybe this is the right time to mention this neat burger joint, Burgs by Project Warung at the basement of Golden Mile Food Centre or the old army market as the place is commonly known. 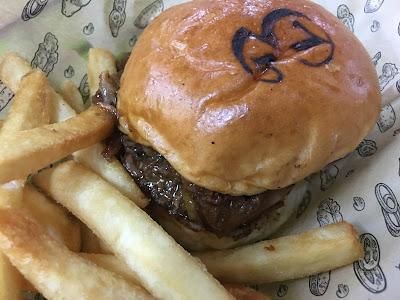 Been having the pulled beef brisket with additional caramelised onions for only S$6, quite a steal. The second time I had it, it was less soggy and easier to manage. It's not a very big burger but it's packing a lot in the 'tasty' department. At that price and only a short walk from my apartment, I plan to have this at least once a week. 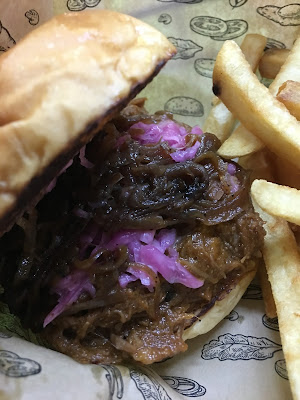 Hey Cavalock! Found your blog through the singapore food blogs site and boy am i glad to have stumbled upon this. Have been reading the older posts for a bit and really liked the posts about food, your family home, and the board games. And of course meidi-ya raids. Please keep on writing!

Hi AS, thanks for dropping by. Glad you like what you see! :)