So here we are again on Sunday. Only this time there were 7 1/2 of us for breakfast. It wasn't as crowded as the last time but that's probably cos of the haze that has blanketed the entire island for last couple of weeks. 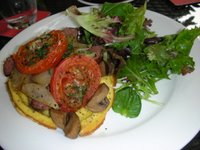 Anyway, service was a lot better than the last time. No wrong orders and the food came real fast too. This time, I had the omelet with sausage, tomato, onions and of cos, mushrooms. So can anyone tell me the difference between a flat white and a latte? Everyone pretty much enjoyed themselves (including the mosquitoes again) and we hung around till about noon. 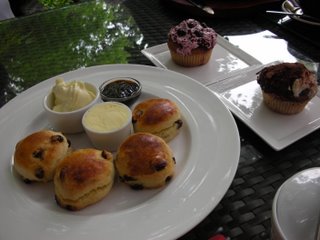 In a totally unrelated bit of news ... Gen Con is coming to Brisbane in 2008!

For those who don’t know what Gen Con is, it’s THE gaming convention event for the gaming industry. It’s been around for about 40 years and every year, there are two in the US as well as recently Europe. And knowing me and games, well, it's a given I'll try ne best to be there.

It’s the closest Gen Con has ever been to this region and after speaking to some friends, we are pretty hyped up about it even though it’s two years away. A couple of me friends were lucky enough to make to Gen Con in the US a few years ago and it’s definitely an experience.

think flat white is a term coined in australia - basically a latte served without foam in a bigger and flatter cup.

oh theres a restaurant here serving foods like that,Raquel,omelettes are their specialty.

i love breads!!i should go to eat-all-you-can resto,they serve bread right after baking them,warm and yummmy :)

mia: ah thanks...but they served both the latte and flat white in the same kinda cup. heh. think i prefer flat white.