It's All About Presentation

Got back last nite after a little drinking session down the road from the office with me colleagues, good time to unwind. Am stuck with an urgent regional project due Thursday, current plan is for another unwinding session this Friday nite at The Wine Bar, got the usual one-for-one deal for us media folks. We’ll see how that goes. 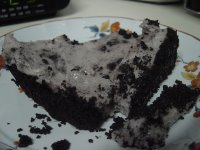 Alright, here we go! The Oreo Cake that we all been waiting! I must really start working on my baking presentation. I know it doesn’t look like the tastiest-looking cake on the planet but it tastes pretty good. Really. I wish I could say it's the photographer but since I'm the photographer too...well, you get the idea. 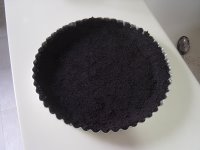 Now the recipe called for a 9-inch pie plate and that’s exactly what I used but it seemed like there wasn’t enough mix to for a good even spread. Maybe a smaller pie plate would have been better. So the bottom crust turned out pretty thin. 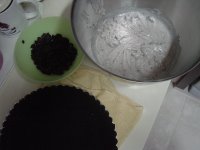 Everything else was kinda easy. Once again, I had a little problem filling up the dish as in trying to make it look nice, smooth and even. Like I said, must really work on my presentations! Kept half of the Oreo bits to sprinkle on my cake whenever I’m eating it and that’s like, every nite since Sunday! Well, someone has to I guess. So every nite at about 11pm (except for last nite’s drinking session) for better or worse, I would be trying to finish my Oreo cake, slice by slice…

The Cheesecake that I’ll be doing next, I’m gonna try the smaller cupcake version!

Coming up soon…Secret Origins Part II: The Teenage Years AKA Let’s Talk About Sex
Posted by Cavalock at 11:58 pm

Luck is with you dat everything went ok the next morning...

The cake looks a bit squishy, is it? Maybe there's something missing or the preparation is not that right...

You could've invite me over or sent it by mail for me to taste it...well, I can wait for the cheesecake..

For your next baking experience, why not consider something like the following?