Cavalock and The Top 10 Boardgames Lookback

As I'm blogging this, it's the last day and night of the decade and as much as I would like to do a Top 10 boardgames of the decade, I'm just too lazy for that. So here's the Top 10 boardgames I played in 2019 instead. Couple of caveats first, most of the games were released in 2019 with a couple of exceptions such as older games that I only got to play recently. I don't own all the games here, only a few but I have played all of them. And the cover art of the nine games below aren't exactly in Top 10 order either. 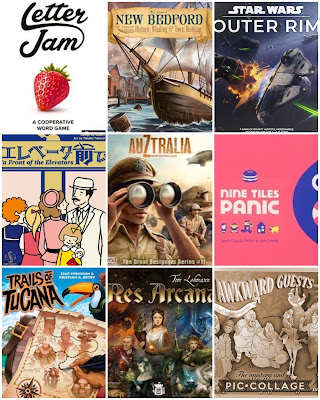 Alright, let's start with number 10. Star Wars: Outer Rim. One of the more thematic Star Wars games out there where you play a smuggler, bounty hunter or any one of the unsavoury Star Wars underworld characters. In a series of turns, you'll be hanging out in that part of the Star Wars universe known as the Outer Rim, taking hunting bounties, smuggling goods or upgrading your ship, all in service of gaining fame points. First player to earn 10 fame points wins the game. The game is full of familiar Star Wars characters and like I said ,very thematic and fun. It's number 10 on the list cos it played a little too long for my liking and not much interaction at most turns.

Number 9 is New Bedford. An older game that was released in 2016 but I found it cheap cheap on our Amazon Prime early this year. Imagine Moby Dick as a strategy worker-placement game. Every player only has two workers and two ships to build the town of New Bedford and sail out to catch whales. Lots of thinking and planning as to where to send your workers. Easy to teach and play too.

Number 8 is Awkward Guests. If you watched the whodunit movie Knives Out, think of this as the boardgame version of it. I played the updated 2019 Kickstarter version of this 2016 game and had a blast. This is a very cool deduction boardgame where you get to question the other players (guests), exchange clues and see if you can determine the killer, his or her weapon and motive.

Number 7 is Nine Tiles Panic. Very quick and fun Japanese game. Everyone has 90 seconds to assemble their  9 tiles in a particular fashion or grid so as to maximise the number of points that they hope to gain. Love the cute zany art and aesthetics, and the theme of little aliens eating humburgers is too funny.

Number 6 is the most recent game I played, Letter Jam. It's a word game which means there are lots of folks out there who will either love or hate it. Gameplay's a little difficult to describe so I'll just paste this description instead.

Letter Jam is a 2-6 player cooperative word game where players assist each other in composing meaningful words from letters around the table. The trick is holding the letter card so that it’s only visible to other players and not to you.
At the start of the game, each player receives a set of face-down letter cards that can be arranged to form an existing word. Each player then puts their first card in their stand facing the other players without looking at it, and the game begins.The clue giver spells out their clue by putting numbered tokens in front of the other players. Number one goes to the player whose letter comes first in the clue, number two to the second letter etc. They can always use a wild card which can be any letter, but they cannot tell others which letter it represents.

Played it twice and it was crazy fun, as the clue giver you are always cracking your brain trying to come up with all them words. But everyone else will be cracking their brains trying to decipher your word but it'll be missing at least one letter. If you think you got a strong vocabulary, give this a shot. Remember it's a cooperative game, so if your vocabulary sucks, everyone loses.

Number 5 is Res Arcana. Card game with gameplay that reminds one of Magic: The Gathering but faster and more satisfying. You got eight cards, play them to you cast spells, summon dragons and other creatures and earn points. Lots of combos once you figure them out. Beautiful, vibrant fantasy-themed art too.

Number 4 is Trails of Tucana. A flip-and-write game where players each have their own sheet of map to draw in. The villages are randomised so every game will provide a unique puzzle. Every turn, two terrain cards are revealed and everyone draws on their own map a trail connecting the shown terrains. As more trails are drawn, players will be connecting places on their maps and scoring points.

Number 3 is AuZtralia. It's an adventure exploration game for one to four players, set in an alternate reality 1930s Australia. Prepare to protect old Australia by building train lines and building your military units before the Old Ones awake with an army of zombies and nightmarish Eldritch monsters. To be honest, I have been playing the solo mode and enjoying every minute of it. It's quite a pain to set up through, huge board, lots of components but looks mighty grand when it's done.

Number 2 is In Front of The Elevators. Probably the one with the quirkiest theme in the list. Little Japanese card game in which you compete to get more of your family members in front of the elevator line at a department store than the other players can. You score points when you get them in the elevators and you can play cards to mess with other players' families. Fast fun game that possesses a ton of depth. The rules are really simple but there is quite a bit of strategy involved.

My favourite number 1 game of the year has to be Empires of the North. It's a strategy card game where players take on the role of a leader of a different faction of tribesmen living in the North, Scots, Inuits or Vikings. Then start developing your economy and there isn't much conflict involved, it's more of a race to gather resources, build stuff and start a combo going to reap them points. The game comes with six different factions to choose from and they all play differently. All in all,  the best engine-building games I played this year. 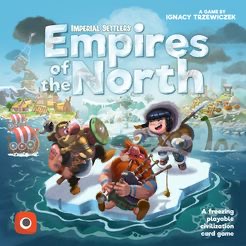 Couple of honourable mentions, I'm back to playing Magic: The Gathering ever since Wizards of the Coast introduced a new format called Pioneer that lets you play your older cards. The guys are all back into playing so naturally if they are playing, so am I. I'm also back into playing Warhammer: Underworlds cos of the new expansion Beastgrave. There are more folks playing in the shops now and I do enjoy the game after all. Reason I stopped back then was no one I knew was playing it regularly.

It was certainly a week of rare and strange sights. Wasn't planning to observe the eclipse but walked right into a crowd looking at it in Orchard Road and thanks to the tinted roof of a shopping mall, we all got a pretty decent shot at it after lunch. And just when you thought you have seen everything, the Baker-at-Home spotted this through our window. Yup, them be Chinese cabbages on a wash pole, not to be confused with my other neighbour the Washpole Patriot. 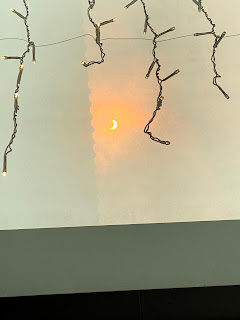 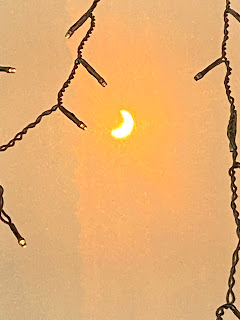 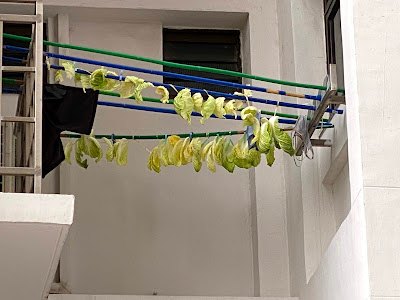