How spontaneous am I? Well, I was on the bus on my way to a game of Beastgrave in Katong thinking bout what to have for dinner and the bus passed Plaza Singapura, I can see from my seat that there's no queue for Five Guys, immediately leapt off the bus and was in line faster than you can say 'fast food'.

Wasn't planning to have burgers that evening but there I was. Well, the Baker-at-Home and I ate at Five Guys when we were in London. The burgers were alright, didn't really blew us away so we weren't exactly in a rush to head to Five Guys when they opened here last year. So it was up to Spontaneous Me to make a spontaneous solo trip to Five Guys back home here. 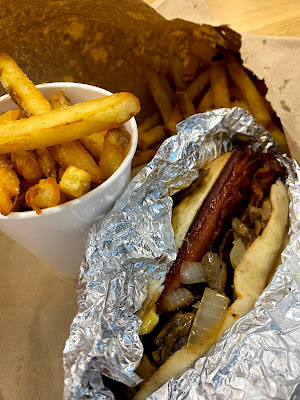 I had the Bacon Cheese Hot Dog with mushrooms, onions and ketchup. Ordered the small fries and there were a lot of fries in that little overflowing cup. Yah, been ages since I had a hot dog so why not. I dare say I like the hot dog a lot more than the burger I had in London. Loved the fries, just like in London. Only thing that's gonna prevent me from heading to Five Guys anytime soon is the crazy a$$ price tag. Hmmm... $26 is kinda pricy for a hot dog, fries and soft drink. 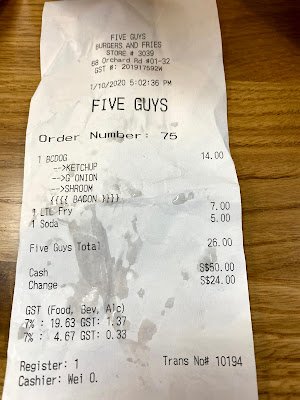 Hey, I just remembered when we were having our burgers in London Five Guys, we had just finished shopping at a Warhammer shop cos we had our hands full with Warhammer shopping bags filled with miniatures. And now I was on my way to a Warhammer shop with my bag full of miniatures for Beastgrave. Spontaneous or something more cosmic in play? 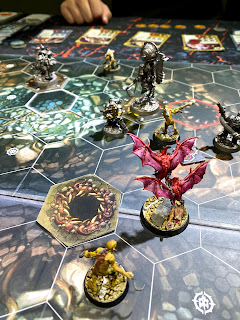 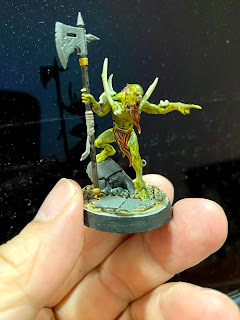 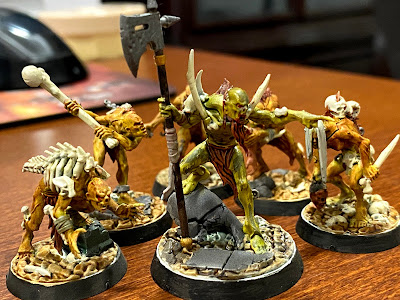 Anyway it was a casual match between my pack of ghouls the Grymwatch against a buncha of armoured dwarfs Thundrik's Profiteers over at the Warhammer shop.  Changed my strategy to controlling objectives instead of trying to kill my opponent. My objective deck contained cards that scored me points for having my ghouls at certain places on the board instead of scoring massive points for killing opponent's guys. It worked. Won my game with a last turn slew of objective grabbing around the game board. Glad I returned to playing Beastgrave around the end of last year. Always looking for an excuse to paint more figures!