Looks like a new Haagen-Dazs flavour has just hit our local supermarket fridges. Royal milk tea or rather extremely rich royal milk tea. A wee bit too strong for me and I love royal milk tea! So yah, it's nice but I prefer my milk tea ice-cream a little less regal. 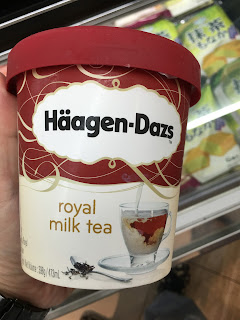 Since the last couple years, my neighbourhood of Jalan Besar and North Bridge Road has been called a lot of fancy names like hipster haven or heritage area. Then every other week, some new food joint opens up around the corner. I just found out Char has moved from Guillemard Road to Jalan Besar and there's this new fried porridge stall that's just packed all the time. But what you don't read a lot about is the amount of vice activity that goes on in the area, not that I'm actually complaining. It does add a ton of colour and vibrancy to the district. And believe me, if not for them half of the eateries here would have gone out of business ages ago.

From the KTVs with the young foreign girls to the KTVs with the younger foreign girls, there's always something to see when you are out grabbing dinner in my neighbourhood. Girls from Vietnam or China in heavy make-up ta-pao-ing their dinner before heading to work. There are numerous cheap rented apartments along Jalan Besar and you can usually spot local men picking them up in the afternoon. Yes, in the afternoon.

Hey, who am I to judge? If the local uncle can find happiness in the arms of a young foreign hostess, good for him! Then on the Sundays, it's the foreign worker couples that take over the neighbourhood and void decks and parks and staircases. I dare say these are domestic workers with their East Asian boyfriends or lovers as they often form a queue outside the budget hotels near my place. Once again, who am I to judge? Although I did notice something interesting. If I do my supermarket shopping on Sundays and I see a foreign worker couple at the checkout counter in front of me, it's ALWAYS the Filipino girl who pays for the groceries (beer, instant noodles and snacks are stables). I must have seen over a dozen of them over the months and all the guys never ever pays. I just find that amusing. 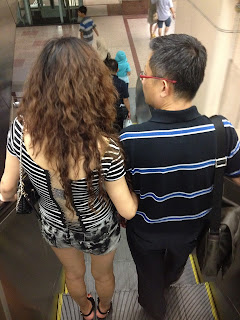