Cavalock and The Mystery of The Lovelorn Letters

There was no way I could resist heading to the newest Japanese bakery in town especially when it's only one train stop away from my apartment. Located on the ground floor of Wilby Central along Queen Street, Boulangerie Asanoya is a pretty big and spacious joint. Still spanking new and I especially like the silent yet soothing video projections of sakura or cherry blossoms on the white walls. Dropped by after lunch on a rainy weekday afternoon and had my heart (or stomach) set on their popular green tea chocolate cube. Saw a buncha mouthwatering photos of it online with all that green tea custard oozing outta it and I was sold. Unfortunately they were all sold out so I had the caramel apple cube instead. 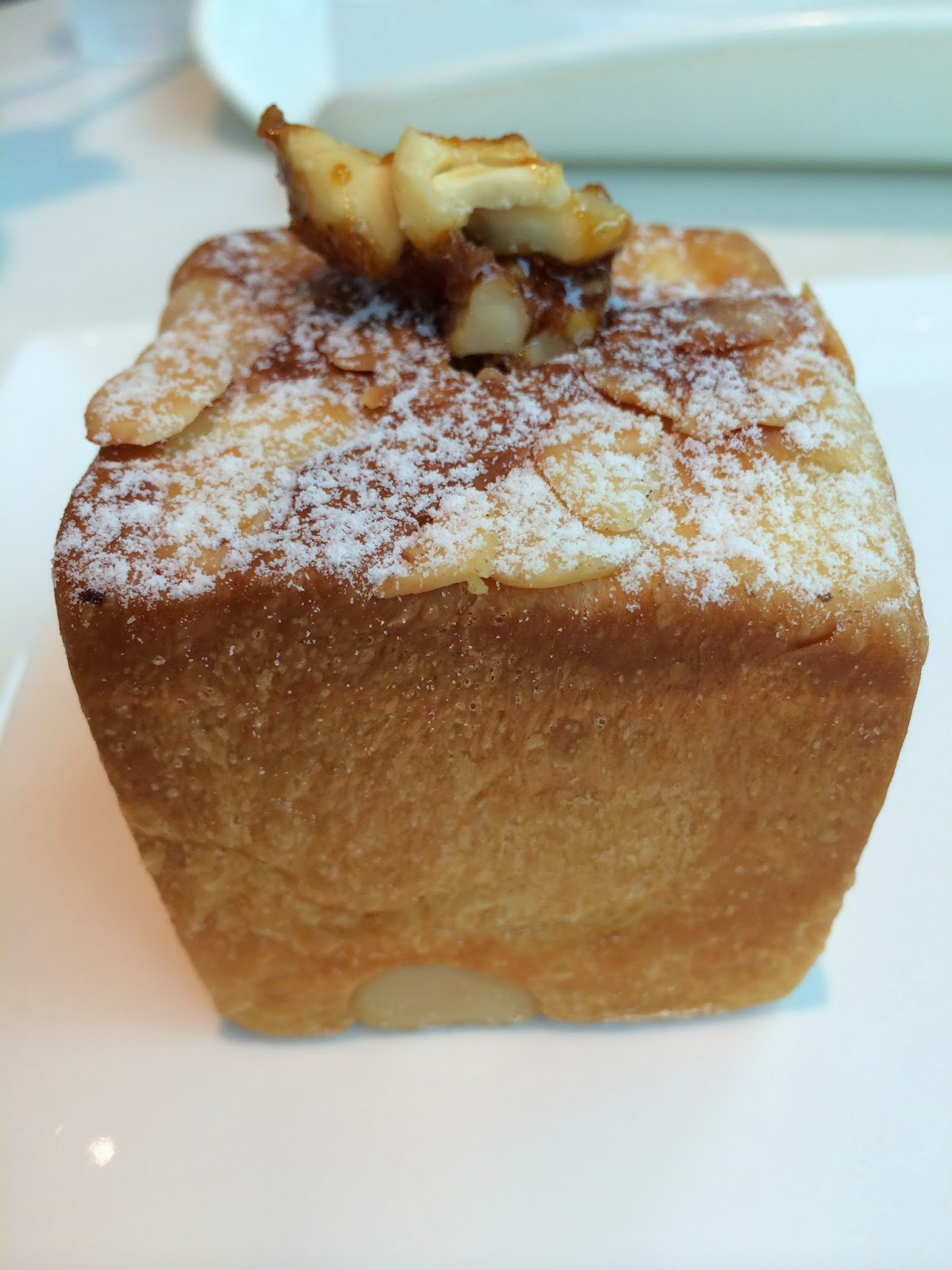 Well, its got caramel and apples, two things I really like so it's a no brainer. Sliced it right down the middle and was sorta disappointed at how dry it appeared. But we all know how looks can be deceiving. That first mouthful of cake was moist, totally delicious and with nice chucks of apples in it. Not too sweet and I like the sprinkle of almonds and walnut topping. 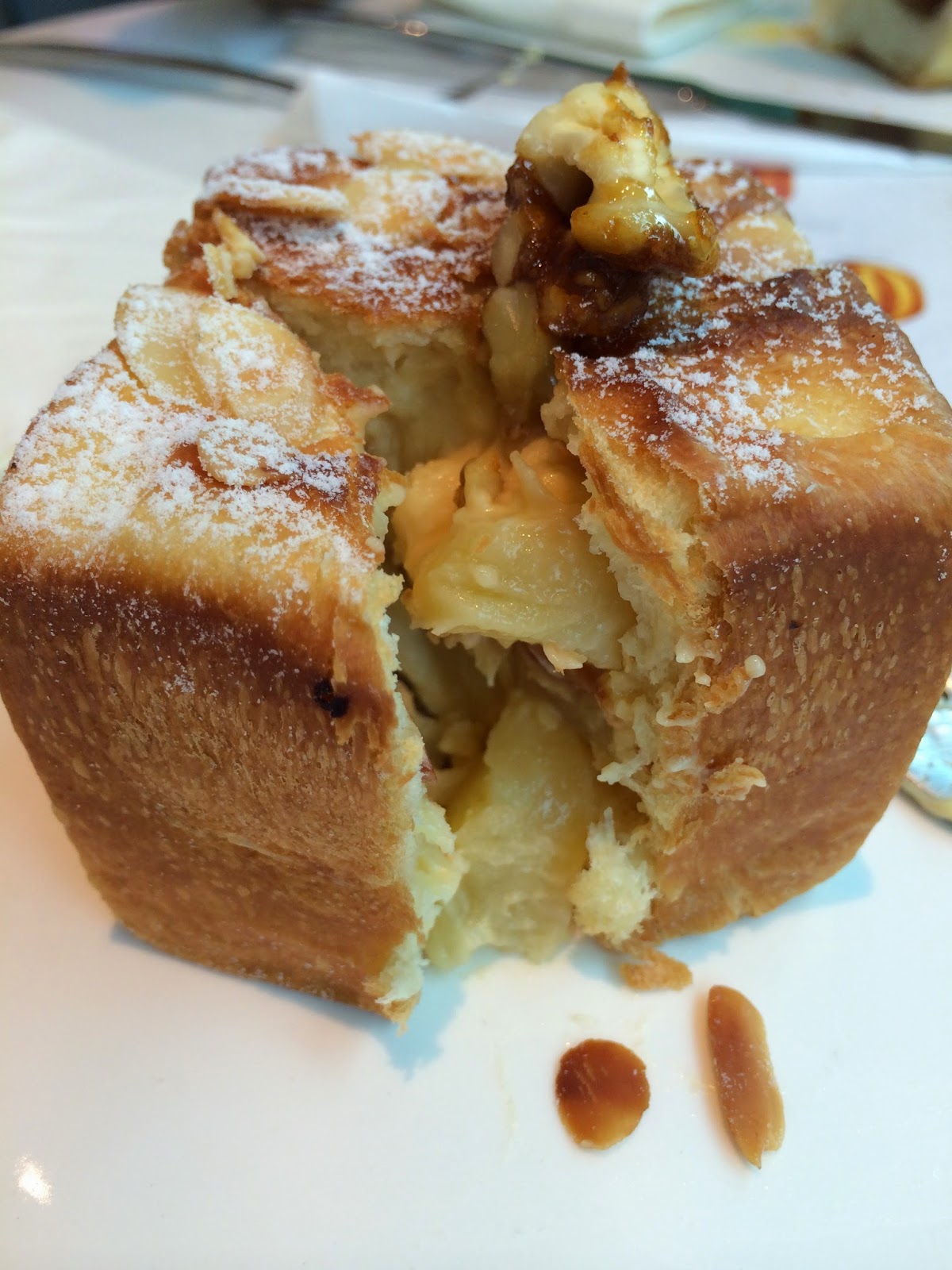 There's wine too and their dessert menu is a selection of pastries paired with a scoop of Haagen Dazs ice-cream. I was also kinda intrigued by the garlic, maple and anchovy butter spreads that were on sale. Might pick up a bottle to try them on some crackers or bread next time. They got a nice setup going here and I would definitely come back again. 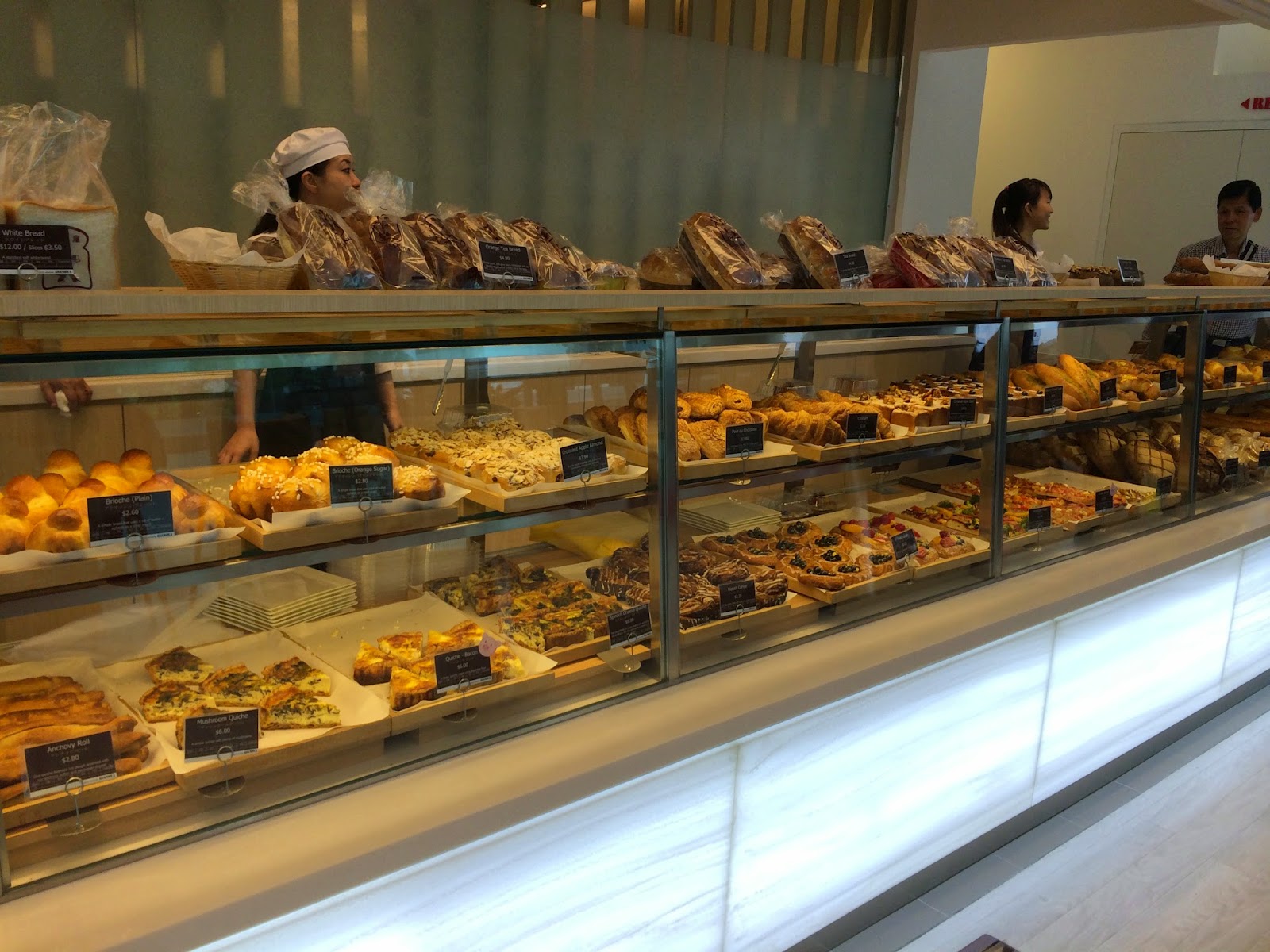 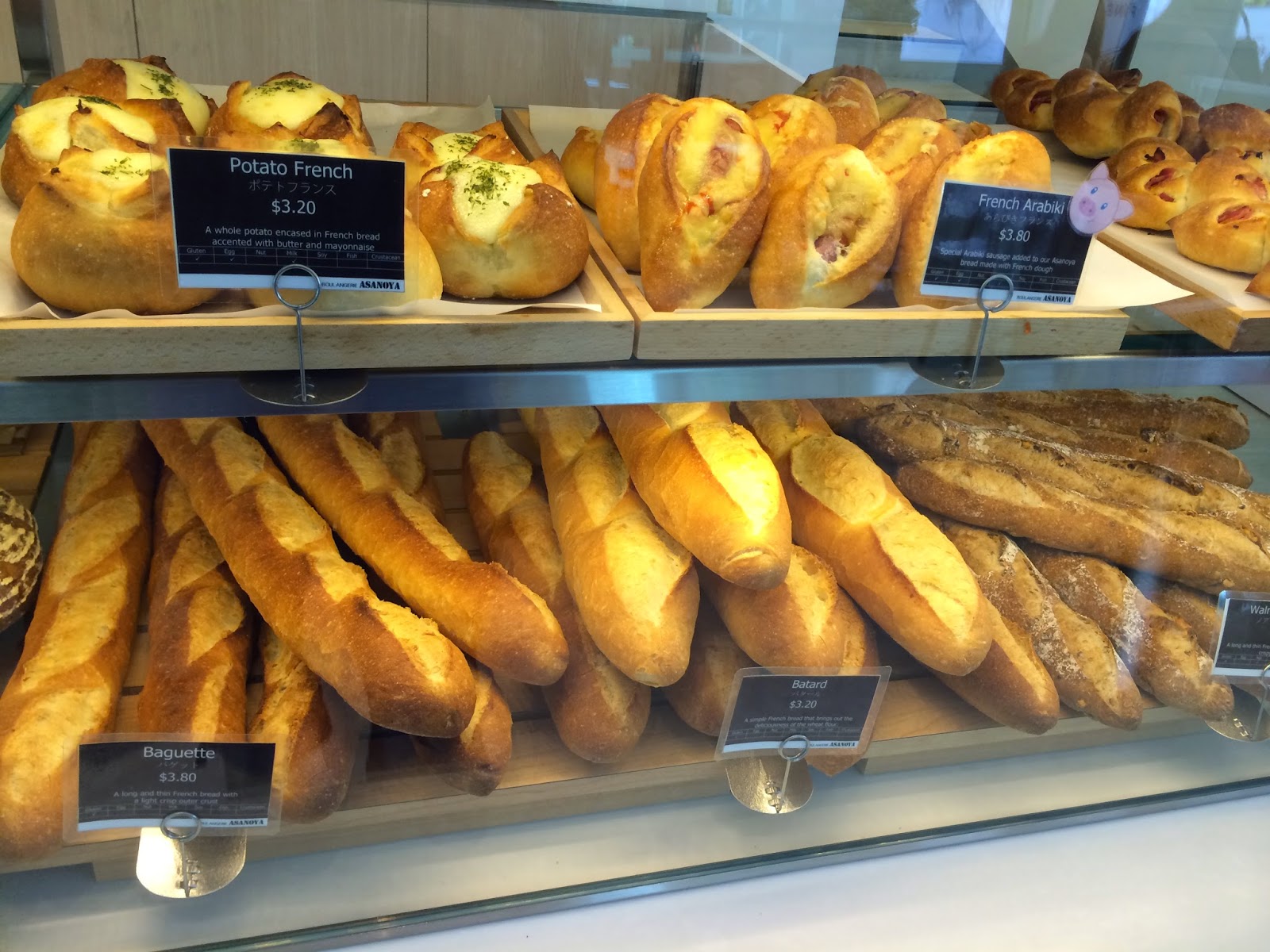 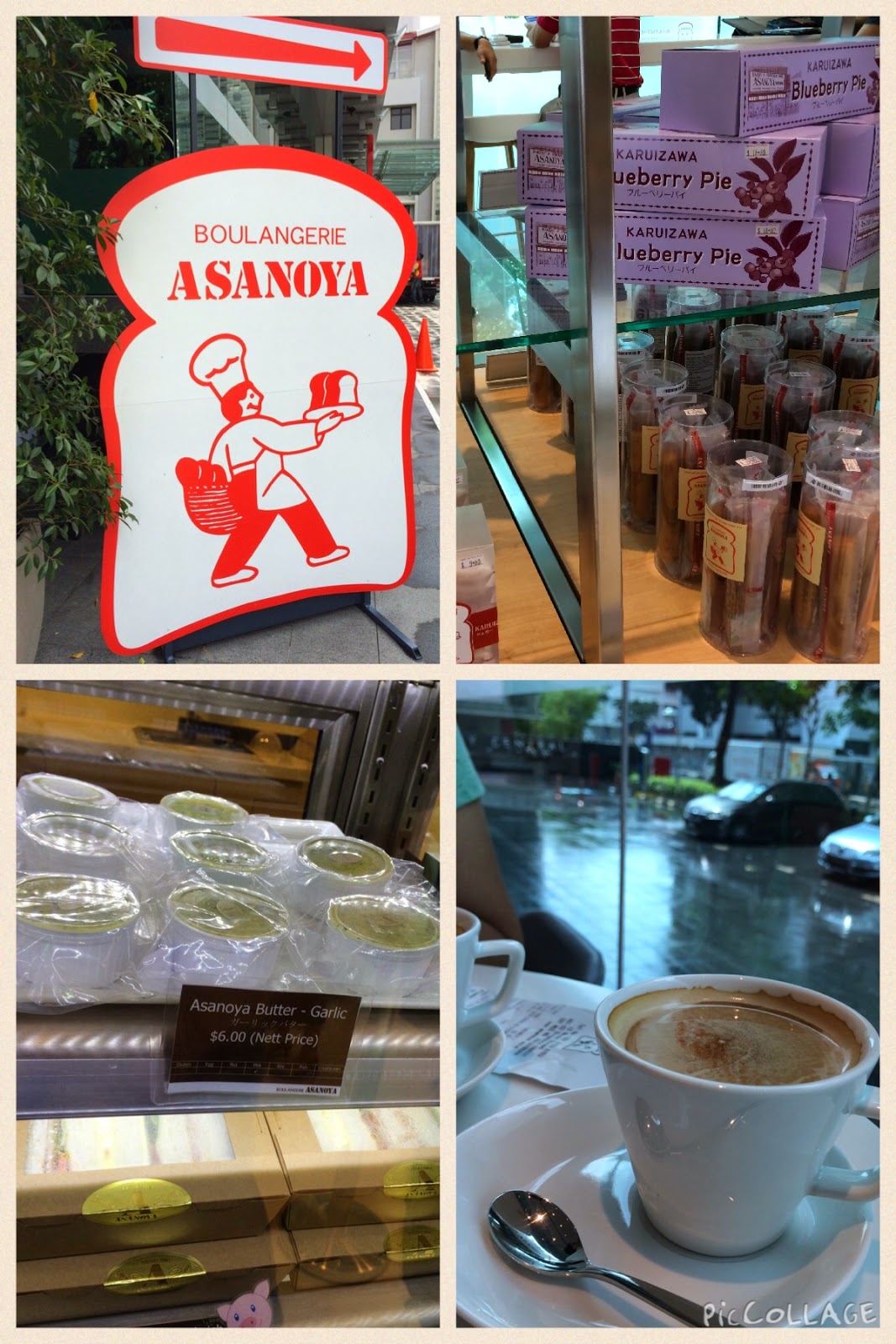 So I thought maybe I oughta take a break from posting stuff from the old family home cos gawd knows there's more. Besides hunting for vintage artefacts from my family's past, I'm still analog gaming at least twice a week with the guys, three if I'm lucky. Boardgaming has again been in the news lately, people actually thinking it's a new thing when it has been around for decades. You can read about it here and here.

Right now, I'm hooked on boadrgames Splendor and Machi Koro, two very simple set collection games where you score points by collecting colors or cards. On Friday nights, we try to continue our Pathfinder RPG campaign and that's really fun. I play a black female Crusader who's the tank and healer in the party. On some Saturday afternoons, it's time for Heroclix with me and my Green Lantern Corps. The newest game I'm playing right now is Warhammer Conquest Living Card Game, that's set in the popular Warhammer 40K universe. Not bad, and I much prefer it to the Star Wars Living Card Game (which I have already stopped playing) by the same company, Fantasy Flight Games. And I'm still looking for players so I can finally crack open my Arkham Horror set.

The last time I talked about my hobbies and games, I went on a little rant about how overpriced they are here. I still can't believe that our local game shops are charging at least over 3X the official US retail price. If you think the Sim Lim shops are bad, well, there are a couple of geek boardgame and miniature gaming shops around town that are in my opinion, just as bad when it comes to brazenly overhanging customers. All the more reason for gamers to shop online as far as I'm concerned. 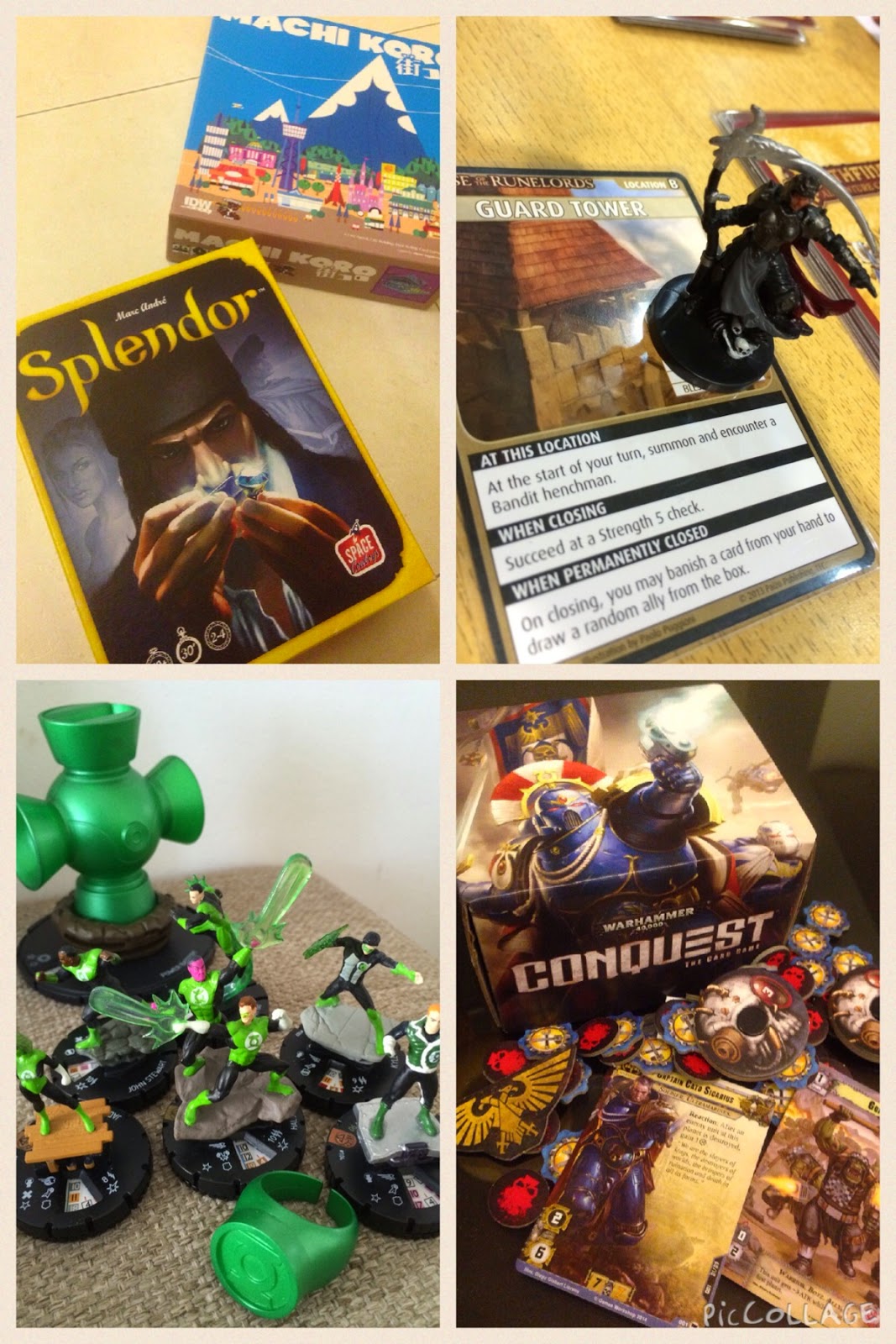 Ah hell, who am I kidding! ;) I'm not gonna take a break from chronicling the retro relics in my old family home. Four months ago, while clearing out my late uncle's desk drawers, I uncovered a small stack of what appears to be lovelorn letters that were written at least 60 years ago by an unknown young lady. It's still debatable as to which of my late uncles' the letters were written to. The identity of the writer remains a mystery as her name was torn out of the letters. I suppose you could say that was a classy move, non? 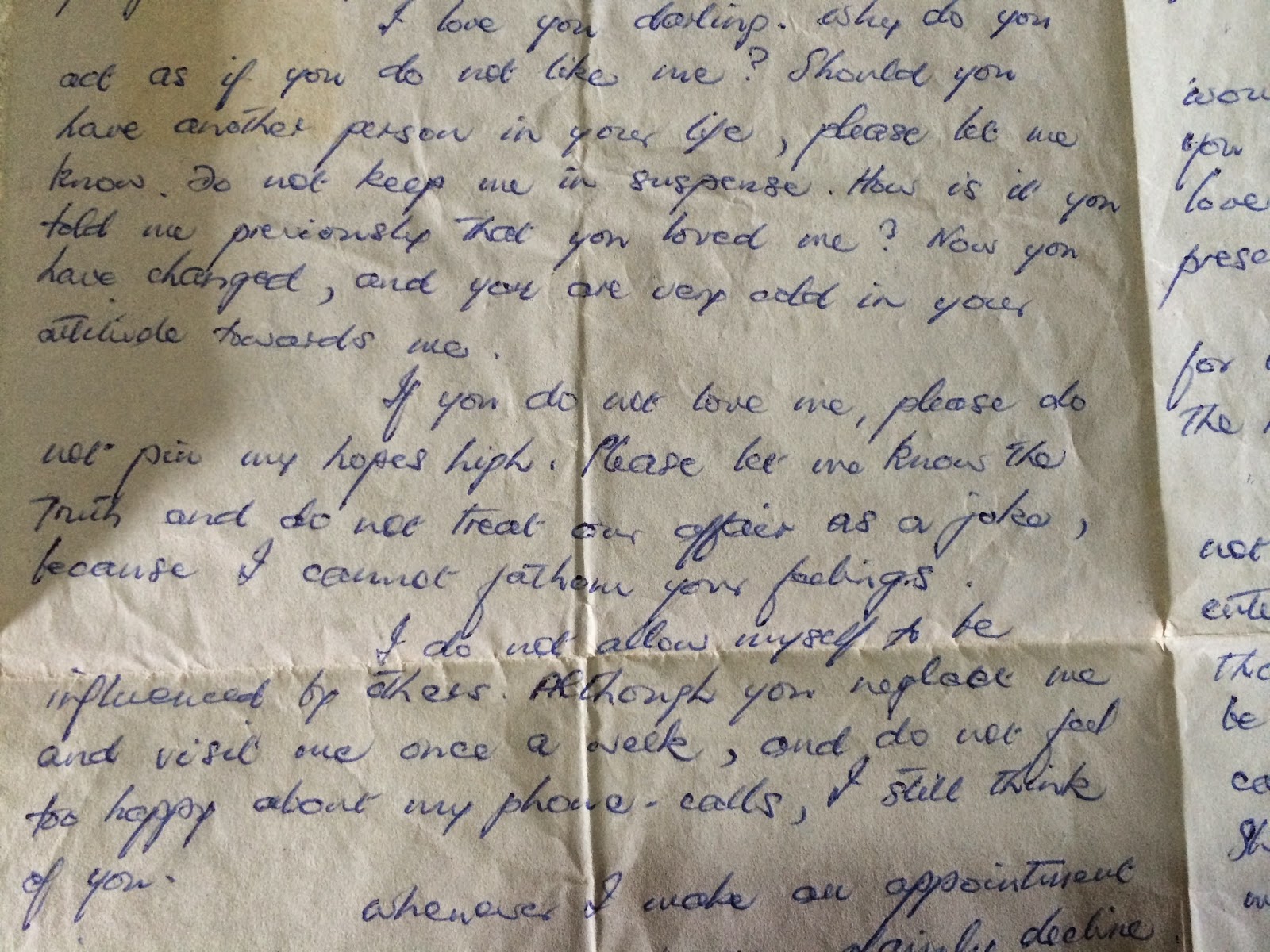 I hope you can get a bigger or closer look at the letters cos they are extremely well-written, not unlike something you would expect from a Jane Austin novel. I'm absolutely fascinated that a young lady back then could pen such heart-wrenching letters as well as possess such excellent penmanship. Truly a lost art in today's society. You got to remember that 1950s and 60s Singapore ain't like London or New York of the same period. Not many locals spoke English and there were most likely more kampongs than tall buildings around the island. And I suppose today's breakups are all done through Whatsapp too or if you are lucky, an email. 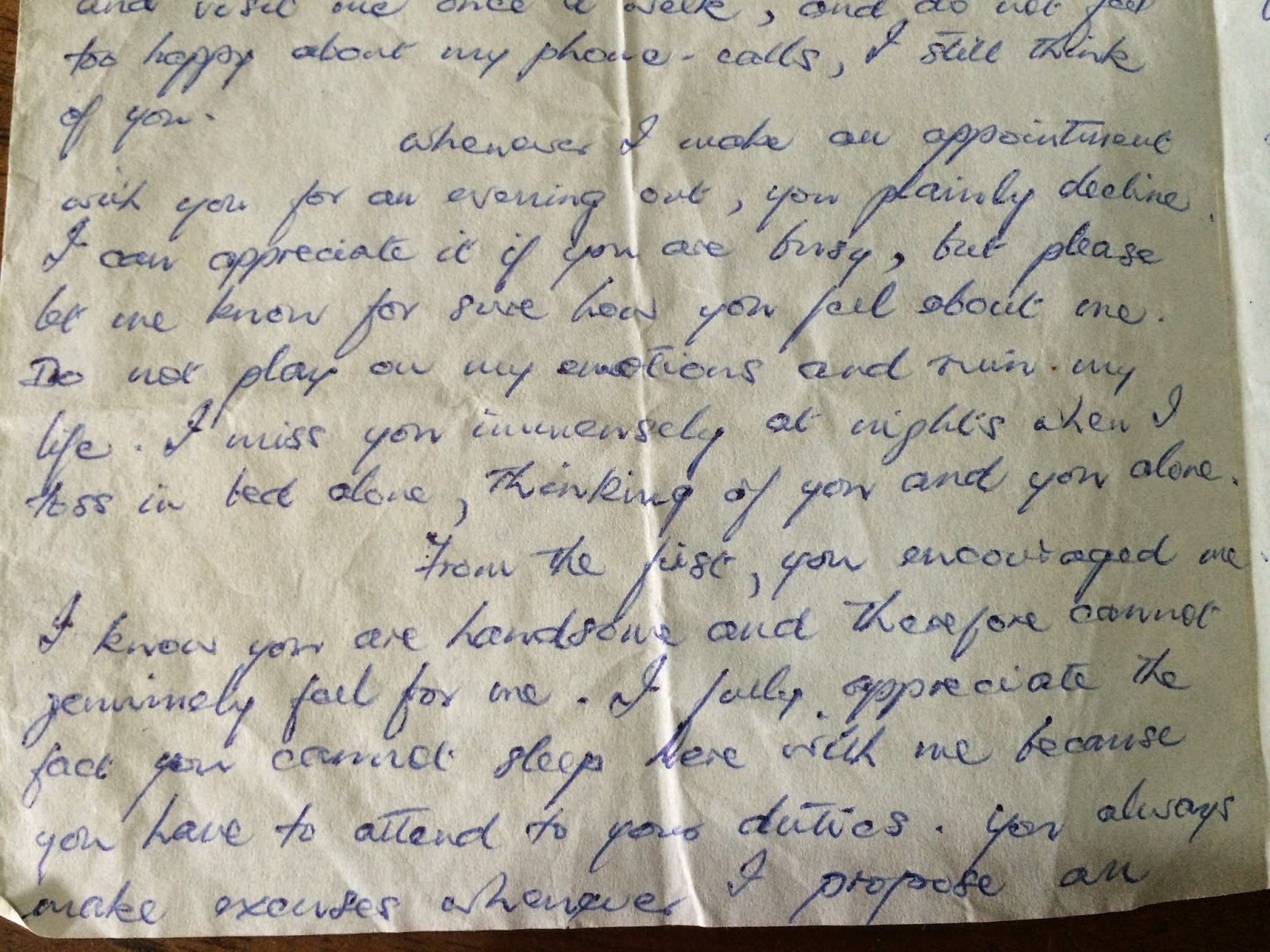 She's definitely an educated person. I am guessing that back then one doesn't exactly encounter many young ladies who could express their feelings so eloquently. She was probably a teacher or maybe even a university student. I guess the idea of someone actually letting his or her emotions completely take over their lives just seem so alien to me. With today's spotlight on feminism and equal rights, I doubt any strong modern woman would allow herself such an outpouring of emotions. Now even though she and my uncle never got together, I do hope that she has found the happiness she deserves. 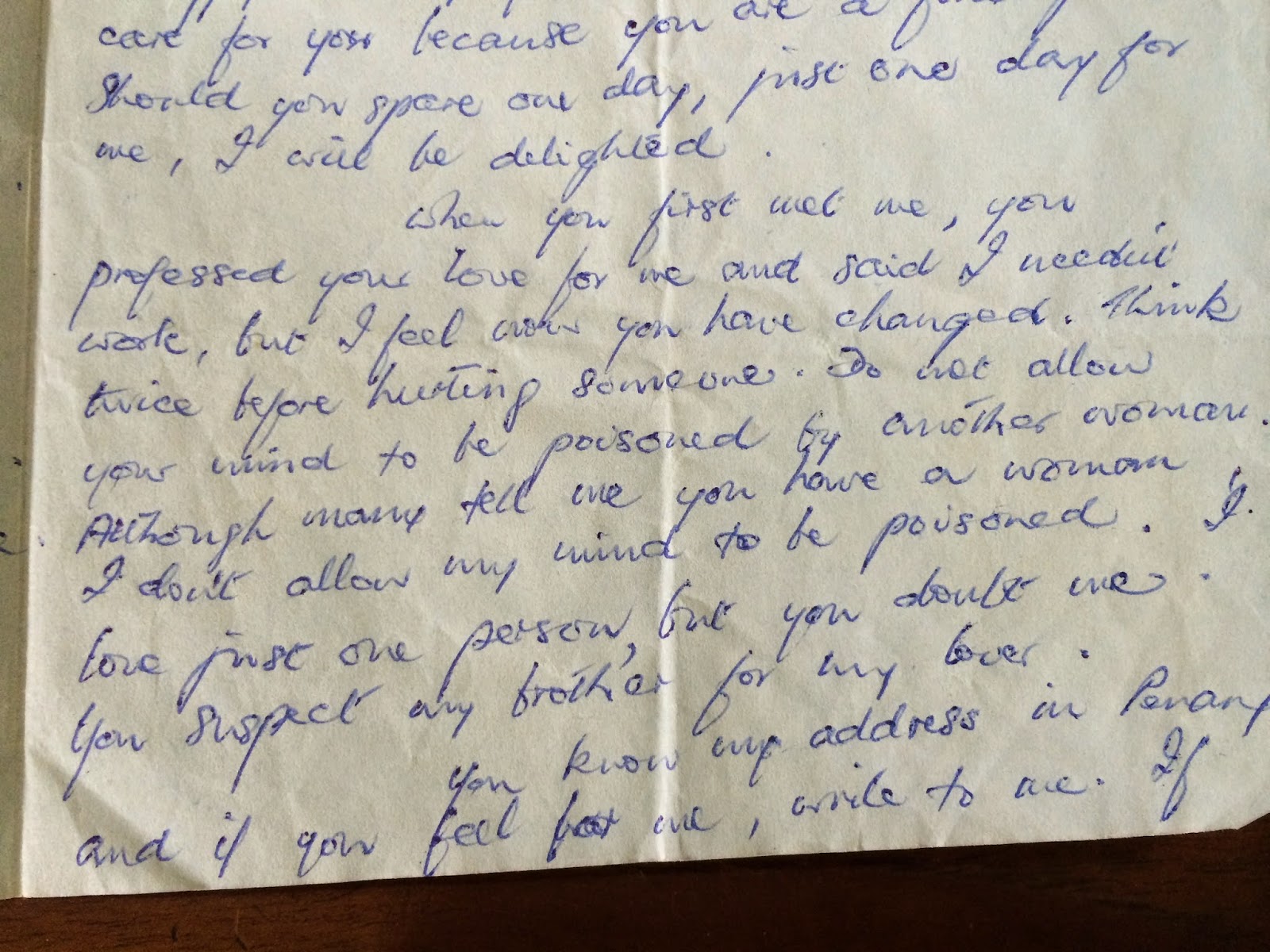 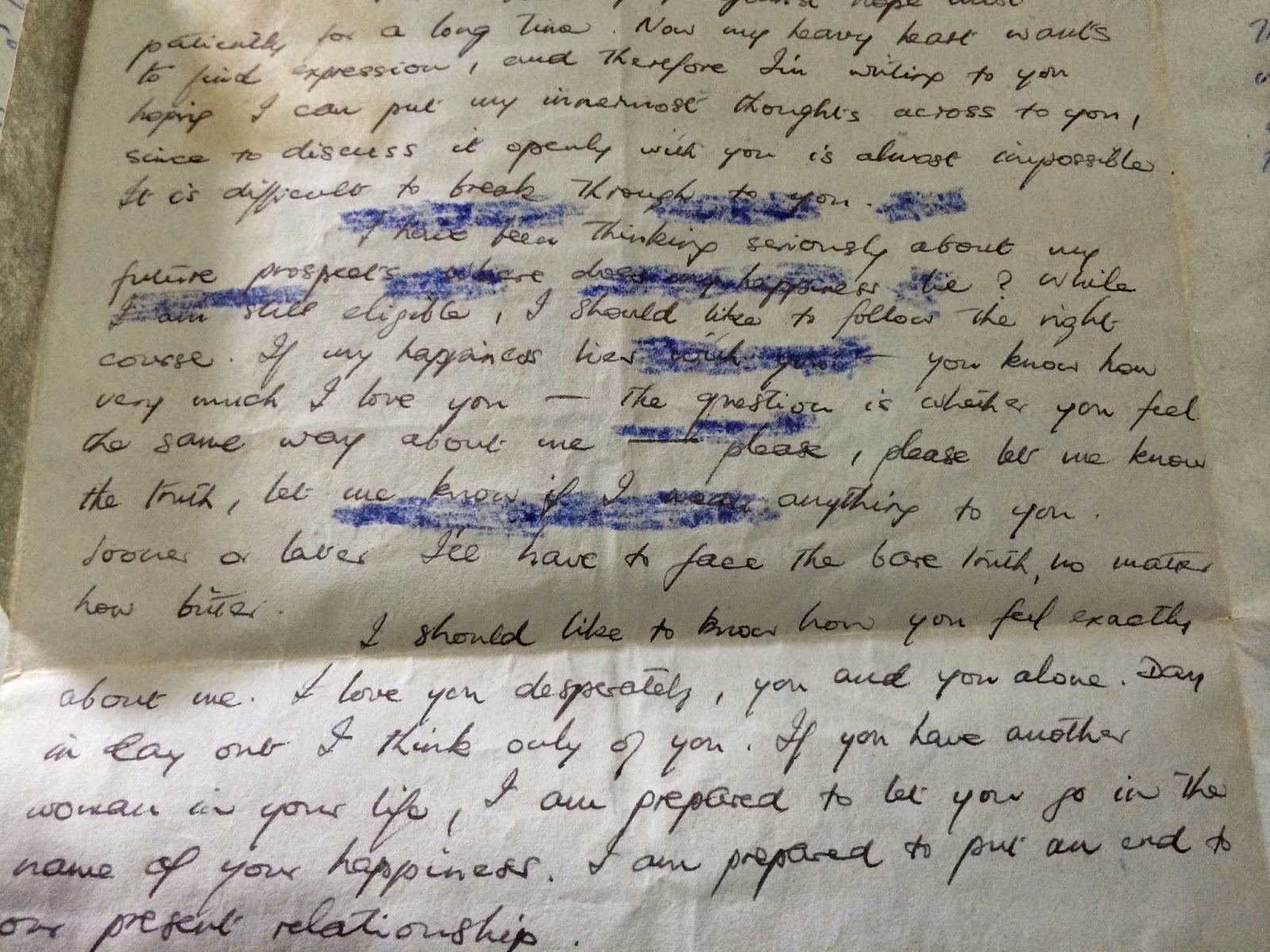 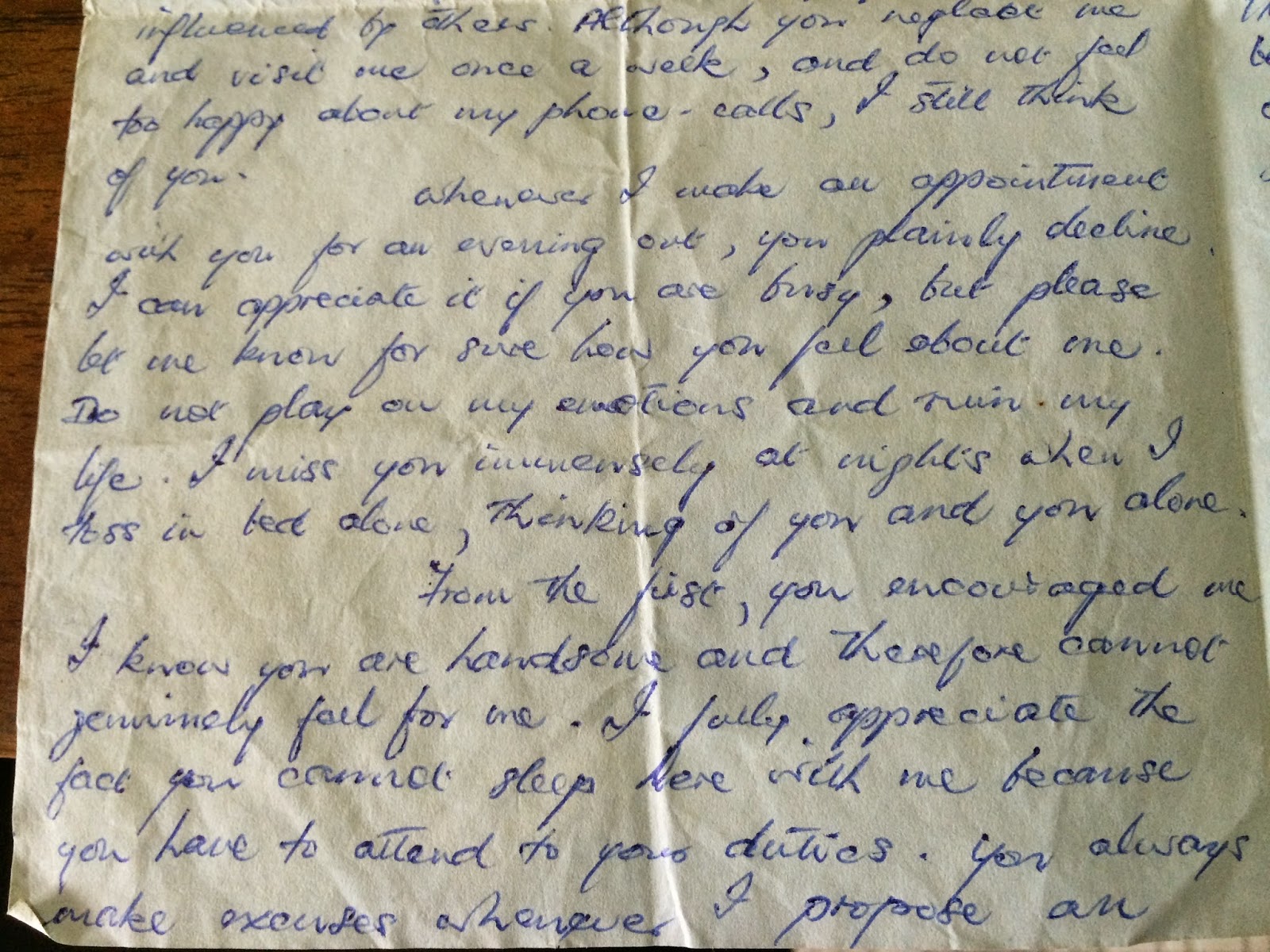 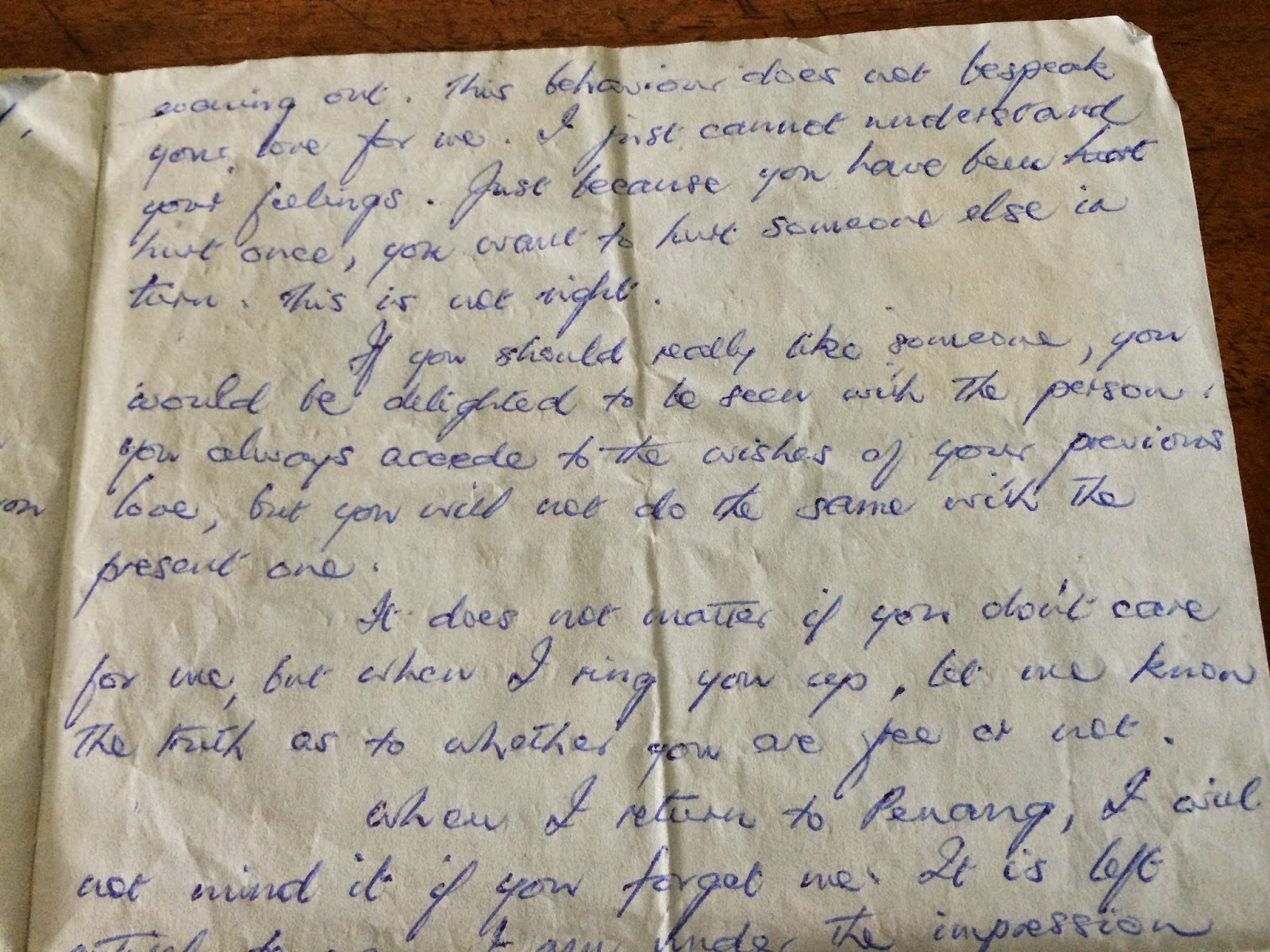 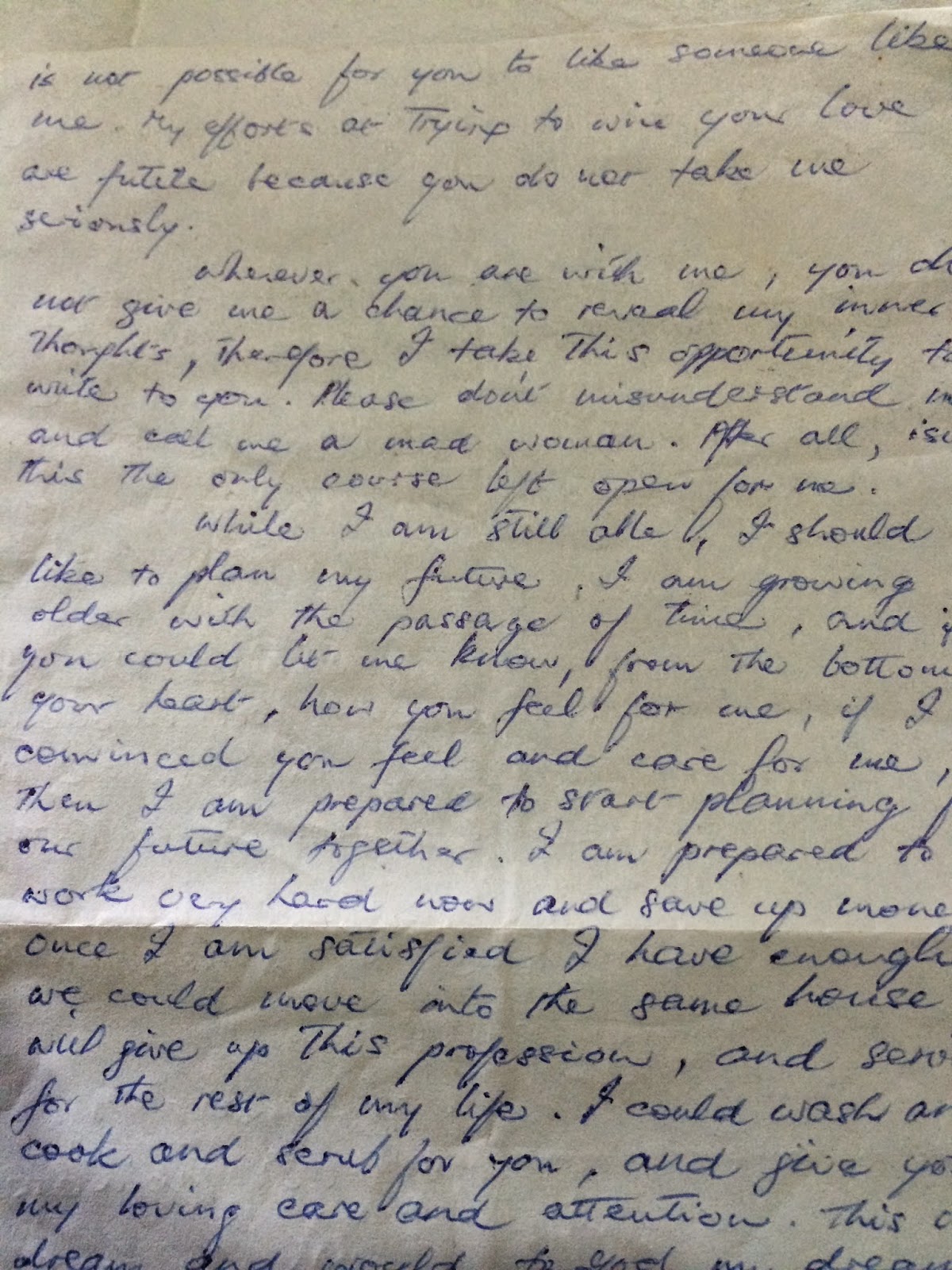