Yes, I know it's weird to call it a 'day off' when I'm out of the rat race but damn it, I can walk again! Dropped by mezza9 for lunch last week, after a harrowing five months away from town. Oh, how I missed my tasty little crab cake. And its always a joy to walk up and down stairs again although there's still some minor resistance or pain. It's more the descending part that hurts. 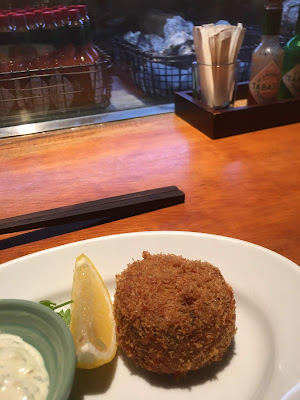 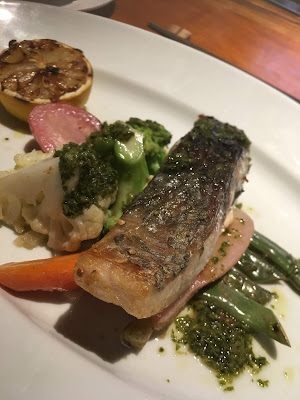 Anyway, another cause for rehab milestone to take note as I finally had my own Ferris Bueller's Day Off in which I worked out and played for almost 12 hours straight. Hit the gym again for the first time since my operation in March and right now my body is aching all over (again). Not a good idea to push myself too hard as I still tire easily. Then a quick lunch at Daily Cut (damn the new menu! What happened to my sweet potatoes base?!?) before meeting the guys who took half-day's leave and we played card games and board games till 9pm. Wanna know how dedicated or some would say 'crazy' we are bout gaming? After my Daily Cut lunch, I met the guys at one of their office's cafe where we played till 2pm cos one of them wasn't on leave. Then the rest of us drove to a gaming shop at Marymount where we continued gaming till 6pm and broke for dinner. After that, more folks showed up after work where we played more board games! 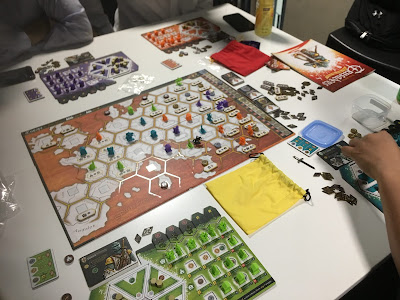 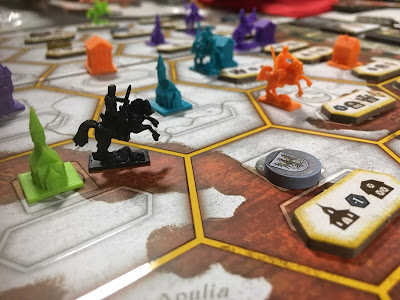 That there is Crusaders: Thy Will Be Done the boardgame. Excellent fast-paced game where you only have one thing to do each turn, or maybe two later in the game. Five different actions to choose from, you can either only move, build, crusade, muster or travel. Your opponents have the same choices and you gotta strategise and see where they travel to or who they are fighting cos the Slavs and Prussians get stronger after each fight.


"Move your knights, erect buildings, and go crusading to spread the influence of your Order. When the Orders get too strong, King Philip will become nervous and disband all Templar orders, ending the game.
Crusaders: Thy Will Be Done uses a combination of rondel and mancala mechanisms. Each player has their own rondel, which they can upgrade over the course of the game, that controls their action choices during the game. Your faction gives you a special power to control your rondel, and the buildings you erect will help you form a strategy."
Played the twice this year and my overall strategy is to get another knight out in the field as soon as possible and build the churches fast as they give you 'influence' or victory points. The more you build, you more points you get.
Posted by Cavalock at 8:00 am

Hurrah. good to hear you out and about. take it slow still ah.