Cavalock and The Solo Gaming Experience

It's a rare afternoon that I get to set up such a rewarding solo boardgame session in my tiny apartment. The baker-at-home was at one of her regular baking lessons at ABC Cooking Studio and I had a couple of (rare) hours free so why not. Well, you can savour the close-to-perfect culinary result below. Matcha swiss roll just like what you expect to find in one them fancy Japanese patisseries. Anyway, back to analog gaming. So I got my copy of the Elder Sign expansion Omens of Ice earlier this year and haven't had a chance to play it until now. 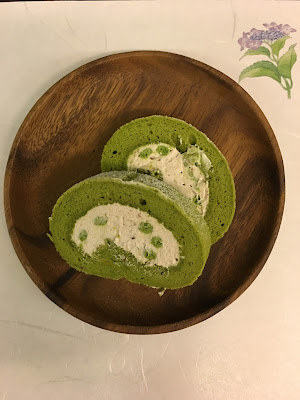 Based on H.P. Lovecraft's Cthulhu mythos, Elder Sign is a board game that can also be played solo as well as with up to 8 players. It's a co-operative horror boardgame set around the turn of the 20th century where you and other players help each other defeat different ancient horrors from destroying mankind or just your sanity. 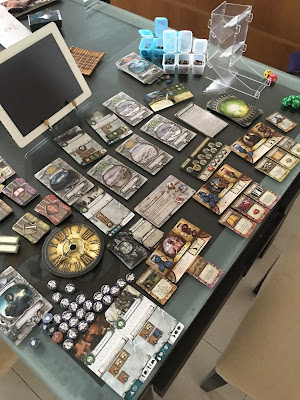 "Twenty years ago, during the Klondike Gold Rush, over a hundred thousand prospectors traveled deep into the Alaskan territory. Most of them perished in the ice, a few got rich, and some awoke terrible, ancient evils. Now, down in usually temperate Arkham, the winds are blowing harder and colder than ever before. The Miskatonic has frozen over. Some people complain of insatiable hunger and sometimes the newspapers even report cannibalism. You know all too well that the Ancient Ones are causing the weather and hunger, but this time you cannot fight them from within the Arkham Museum, or even out on Arkham’s streets. You must brave the brutal conditions that killed thousands of prospectors, and fight ferocious creatures from this world and others, or else the cold, hunger, and ice will devastate humanity.
Omens of Ice takes you and your fellow investigators on a treacherous journey into the Alaskan wildernesses, where you must solve the mysteries of three terrible new Ancient Ones. Whether you choose to travel in summer or are forced to go in winter’s dark, at every step you’ll face terrible perils, from the port of Anchorage to the forest paths and mountain passes of the interior. You must constantly fight not only wild animals and ravenous monsters, but frostbite, starvation, and the madness that befalls many who enter this frozen, isolated, white world." 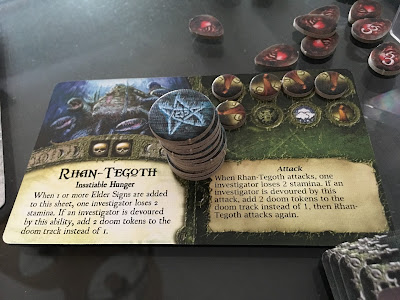 Now as you can see, it's a pretty big set for one-man game and that's cos I was playing three different characters. Each with unique skills and abilities so you got to each one to handle or solve different adventures before it all culminates in the final fight against an Ancient One. 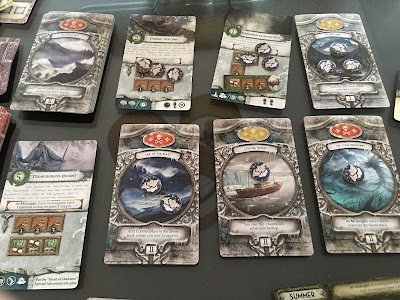 The beauty of Omens of Ice is that it's the most thematic horror game I have ever played. It's like an hour and a half long. It starts off deceptively easy at as you begin at base camp and in town where small victories are not that difficult to achieve. There are always at least six different adventure cards on the table. Each card sets the mood and there's this ever mounting tension as each turn brings more dangers as well as supplies and weapons that the characters can use later. You replace each adventure card that you successfully solve or defeat. Then once they think are ready, they'll leave the camp and venture through the snow and meet the Ancient One. 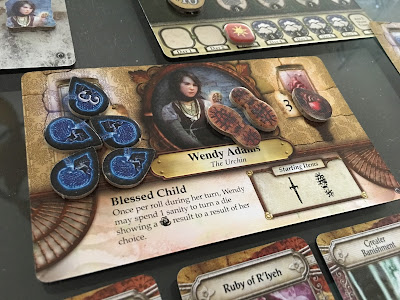 And since I'm controlling three characters, it's quite a lot to manage but it's fun! I have to an eye on each individual stamina and sanity levels and also the group's winter supply. Like I said, It's very thematic, well, I can't say it's realistic since I have never been to the Arctic. 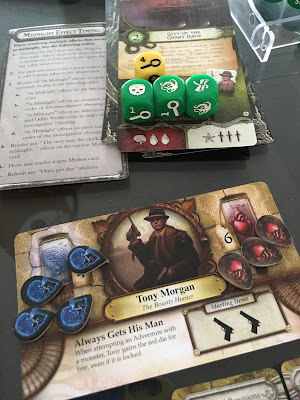 There's so much to be said about playing boardgames by yourself. It's vastly different from playing a video game. This here is a total immersion experience. Everything's tactile. You are moving multiple little pieces, rolling dice and figuring what to do next. Trying to survive. Nothing else matters. You really gotta concentrate and it's almost exhilarating as you lose yourself to the game. 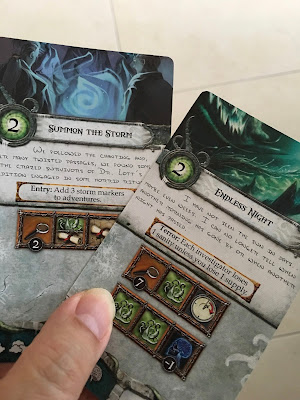 SO REALLY NOW, HOW MANY PEOPLE ACTUALLY READ THIS ENTIRE NON-FOOD PIECE ON ANALOG BOARD GAMING? <^;^>

I did, and quite enjoyed your article. Thanks for sharing your experience in playing solo. The experience seems almost like immersing one self in a good book.

Hey, thanks for dropping by! :) Yup, it's a totally immersive experience. A good and scary book.