Discovered a soon kueh stall at the opposite end of the hawker centre where I have my ‘occasional’ comfort breakfast. Silly me, never knew it was there all along. They were stuffed with the usual tasty turnip, mushroom fillings. Didn’t notice anything else special but it was all good. It’s served slightly ‘fried’ from a huge pan filled with other Chinese breakfast goodies like rice kueh. I had three soon kueh topped with the must-have dark sweet sauce plus my usual cup of tea. Not a bad deal for 80 cents each. 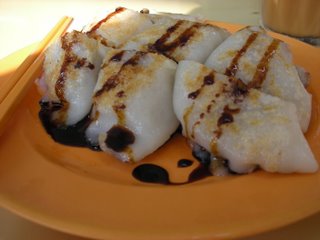 Ah…but the highlight of the day was the return of the old gang, thanks to the new WOW TCG. Went to Paradigm Infinitum that night and almost everyone was there. Some I haven’t seen in ages. Most were familiar faces from the days of LOTR and VS. It was pretty cool, looks like the old fellowship is coming back. But that’s gonna mean spending more money again as well as the neverending quest for more storage space. Sigh.
Posted by Cavalock at 11:03 pm

Glad you liked it!

i realized i should have taken a shot with it spilt open, to show the yummy contents inside.