Back when I was in Cannes, France on assignment, I had something called Soupe de Poisson and it became like my all-time favorite dish ever while I was there. It's a fish soup dish, not too fishy yet thick and really tasty. Almost all the restaurants along the beach served it and I had it just about every other day with my main meal.

When I finally came back to Singapore, I went looking for it everywhere (er, almost everywhere that my budget could get me to) but could never find it.

Then last week, many years later, I found it at The Marketplace supermarket at Raffles City! Well, not in a restaurant but in bottles. So did I buy any? Nope. I don't really know why not. Maybe it was the price(S$19.60 for the small bottle and S$22.70 for the larger one!) or maybe looking at the cooking instructions, I wasn't sure if I knew how to prepare it properly. Last thing I wanna do is ruin one of my favorite culinary memories! Haha. anyway, if I ever decide to try preparing it one day, at least I know where to get it now. 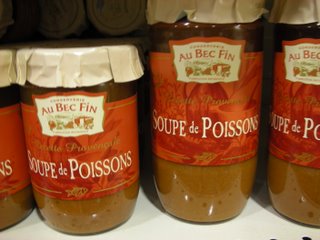 Meanwhile, four down and two to go!
Posted by Cavalock at 9:23 pm

The name is so intriguing;
Soupe de poisonne" (oh did it spelled it correctly?)

I can relate.There are lots of phil goods in some places,but theyre too expensive.

but most of them are so convenient and easy to prepare compared 10 yrs ago. :)

well,you could try it later :)

ghee: heh...think i'll wait till i find a cheaper version on the shelf or in a nice resturant.

galinusa: Melon was good, had little bits of real melon in it too. Tiramsiu was bad. What u think of the new Raffles City Marketplace?

Well, cavalock..u could buy it if you really really have to..I mean when u crave so much for it..u can always close one eyes and 'swipe it' away..hee gd day!