Cavalock and The Rurik: Dawn of Kiev Playback

Been way too long since I spotted a new can of Japanese beer or Grand Kirin White pale ale to be exact. This sure looks tempting but I been on a Calpis Highball trail right now. Also, Iroha Mart has a whole shelf of non-alcoholic drinks too as well as no sugar and zero calories booze. I still don't get the appeal of zero-alcohol drinks, the whole point is getting a buzz and if I'm not getting a buzz, I'm definitely not paying that much money for a can of fake beer. I mean if it's the same price as a can of soda pop, sure I suppose I would go for that. 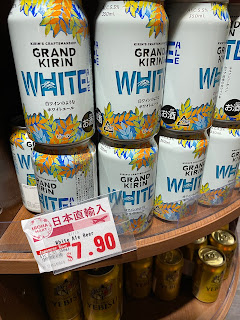 Played a couple games of Rurik: Dawn of Kiev recently. It's a pretty massive boardgame I bought many months ago and I just got my hands on the expansion box Rurik: Stone & Blade which adds more elements to the game. So it's an area control and resource management game with some auction mechanics thrown in.

"You play as a potential successor to the throne following the death of your father, Vladimir the Great, in 1015. The people value a well-rounded leader, so you must establish your legacy by building, taxing, fighting, and accomplishing great deeds. Will you win over the hearts of the people to become the next ruler of Kievan Rus?

We had a lot of fun playing this. There are plenty of decisions to make but the steps are nicely broken up so you are not overwhelmed by it all. First everyone has to bid on what actions you want to take and who gets to do it first. Then you perform the actions that you selected such as moving your men, taxing the lands, building architecture and so on. That's pretty much it, of cos there's a lot more that goes into each action. We played with four players and with the recent lockdown, just three and we all really liked it especially with the expansion that added more elements like new buildings and the option to capture prisoners for additional points. There are rules for solo play too, maybe I'll try it one of these days. 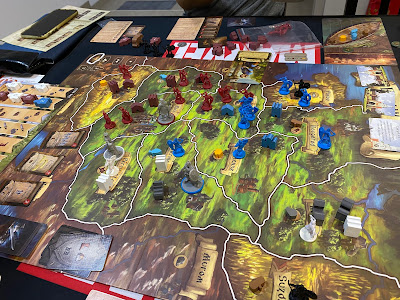 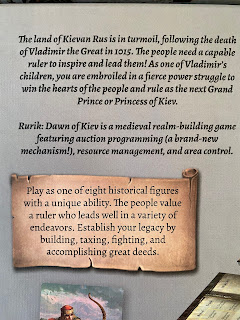 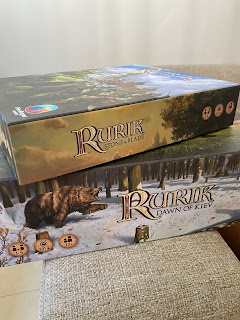